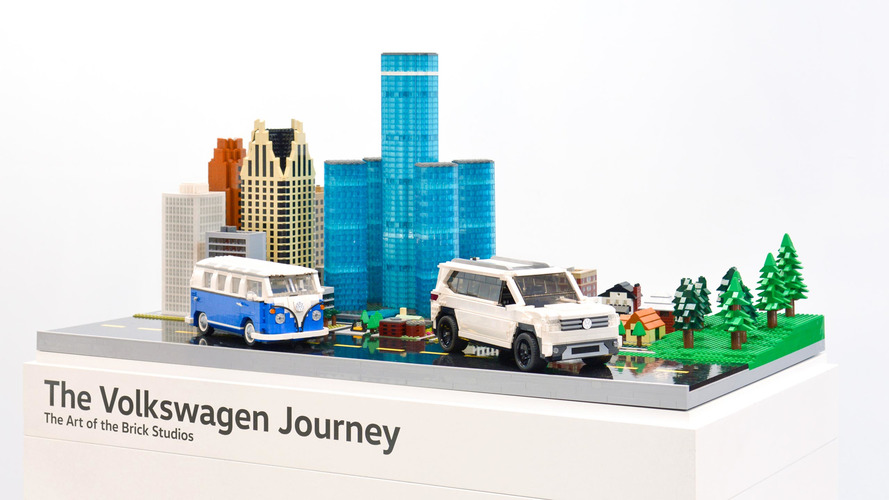 The giant diorama presents the past and future of VW's family haulers – in Lego form.

Volkswagen arrives at the Chicago Auto Show not with new vehicle but instead with over 20,000 Lego bricks. A diorama featuring scale models of the upcoming Atlas crossover and famous Microbus in a miniature cityscape. The display measuring 2 feet by 3.5 feet (60.96 centimeters by 107 centimeters) is supposed to communicate the evolution of VW’s family haulers over the decades.

We look forward to seeing this diorama in the Windy City to get a better idea of its scale, but the models looks great in the automaker’s official photos. The two-tone body and metallic hubcaps for the Microbus are especially cool touches. However, the Atlas’ monochromatic white body doesn’t do much to highlight the new crossover’s design.

If you’re looking to build your own vintage VW, then Lego is happy to sell you one. The company offers a 1,334-piece model of a 1962 Volkswagen T1 Camper for $119.99. At 11.8 inches (30 cm) long, it’s quite an impressive kit when completed. The company’s 1,167-piece classic Beetle is equally cool and even comes with a surfboard and picnic set. The 11-inch- (29-cm) long model would probably look great sitting next to the T1, too.

In the future, you might be able to add the original iteration of the GTI to your Lego collection of Volkswagens. The kit turned up on Lego Ideas in October 2016 and already garnered the 10,000 supporters for the company’s review board to consider putting the model of the classic hot hatch into production. The creator’s photos also shows that the 1,278-piece replica is roughly to scale with the Beetle, so they should look great together.

Motor1 has a team in the Windy City covering the Chicago Auto Show. Look for plenty of live photos and stories from there. You can keep an eye on it all from our hub page for the event.

HERNDON, VA (February 8, 2017) —Volkswagen of America, Inc., has reimagined VW’s adventurous spirit
through a custom-built display made of more than 20,000 LEGO® bricks. Making its debut at the 2017
Chicago Auto Show, the 2 foot by 3.5 foot display highlights the evolution of Volkswagen design and the
journey of VW vehicles with American families through the decades.

The VW journey is set against a landscape that transitions from city life to outdoor scenery, demonstrating the
go-anywhere spirit of Volkswagen vehicles. A beloved VW Microbus takes drivers back to the family camping
trips of yesteryear, while the Atlas stands ready to transport the modern family through new terrain.

Like the original Microbus, the LEGO interpretation has a two-tone exterior, built with blue and white LEGO
bricks. The replica stays true to the iconic model of the 60s with a distinctive “V-shaped” front fascia design,
rounded headlamps, silver round side-view mirrors, silver baby moon hubcaps, a curved bumper in white, and
a bold VW badge, placed front and center.

Made up of white LEGO bricks, the Atlas model highlights the seven-passenger capacity and utility of the
actual vehicle. The model features a characteristic grille, accessorized black rims, roof rails, a rugged trailer
hitch for hauling needs and unmistakable front and rear VW badges.

The 2018 Atlas goes on sale later this year.