BMW M2 caught in the winter hiding its facelift 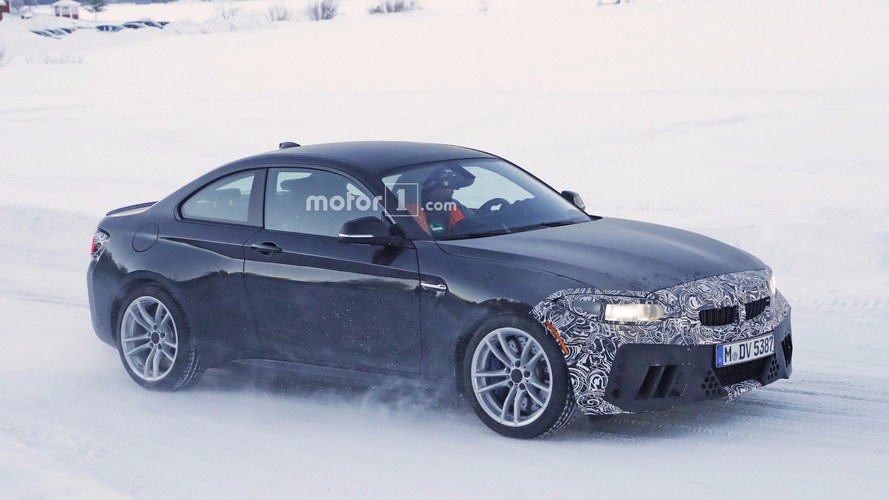 Another prototype of BMW's mildly updated M2 has been spotted by the spy camera.

Photographed earlier this week in Germany, the BMW M2 has returned in a new batch of spy images and this time around we're looking at a different prototype stretching out in a chilly environment. Just like before, most of the camouflage has been applied onto the front fascia where the hot coupe likely has a redesigned bumper as well as some changes on and around the kidney grille. The headlights might also go through a nip and tuck, but certainly not something to write home about.

As with most mid-cycle revisions, the side profile is going to be virtually carried over based on what these spy shots are suggesting. Things get more interesting at the back where the taillights appear to benefit from a more extensive update, but unfortunately the clusters have a semi-transparent tape to mask the changes inbound for the Life Cycle Impulse. BMW was also likely testing a different exhaust system and it seems the rear diffuser is set to undergo mild cosmetic surgery as well.

While we aren’t expecting any novelties in the engine bay of the regular model, it is believed BMW will introduce a special edition called M2 CS with the biturbo S55 3.0-liter engine borrowed from its bigger brother, the M4. If we were to rely on the rumor mill, it’s not going to be the exact same specification as apparently the straight-six engine will be detuned to somewhere in the region of 400 horsepower (298 kilowatts). Even so, it’s still going to have a considerable 35 hp (26 kW) over a standard M2. Not only that, but other upgrades are also in tow for what will likely be a limited-run model, such as bigger brakes, a more aggressive body, modified exhaust, and a different suspension setup.

The entire 2 Series facelift family including the regular M2 will probably be introduced in the latter part of 2017. As for the rumored M2 CS, reports are indicating it will see the light of production day at some point next year.