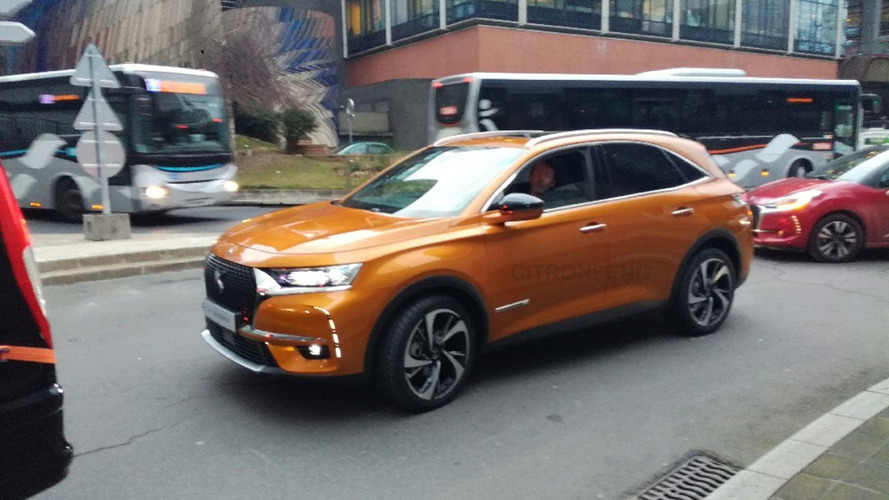 The French luxury brand's renaissance starts this year, in Geneva.

A Citroen fan blog is giving us the chance to take a look at a completely undisguised prototype of the DS 7 – and, apparently, the test driver is not happy about that. This is the brand’s first midsize SUV, rumored to make its official public premiere at the 2017 Geneva Motor Show in early March. Until now, it was believed it will wear the DS X moniker, but new reports suggest it will be called the DS 7.

Spotted in a convoy of Citroen vehicles, the SUV has a prominent front end dominated by a massive mesh-type radiator grille, flanked by sweptback headlights, which appear to be inspired by the Wild Rubis concept from 2013.

Set to rival German premium models like the Audi Q5, BMW X3, and Mercedes-Benz GLC, the vehicle will be based on PSA Group’s EMP2 platform and positioned as a flagship model in the DS’ lineup. From the single exterior photo we have, the car appears to be slightly bigger than the study from 2013.

There’s an interior image too, and while it’s not giving us much information, it suggests the DS 7 will feature some kind of autonomous technology. We also noticed steering wheel-mounted paddle shifter, which could be linked to an all-new eight-speed automatic gearbox, reported to be offered as an option for the model.

The French company is also preparing a new 1.5-liter diesel engine for the DS 7, which will replace both the current 1.4- and 1.6-liter diesels of PSA. The new motor will be offered in power options of up to 130 horsepower (97 kilowatts) and will be joined by a plug-in hybrid version in the coming years. Autocar also says a range-topping Performance variant is planned, featuring a turbocharged gas engine with 240 hp (179 kW).

If the information for a Geneva debut is correct, we will see the new DS 7 in its full glory in less than a month. Sales will reportedly kick off in early 2018.