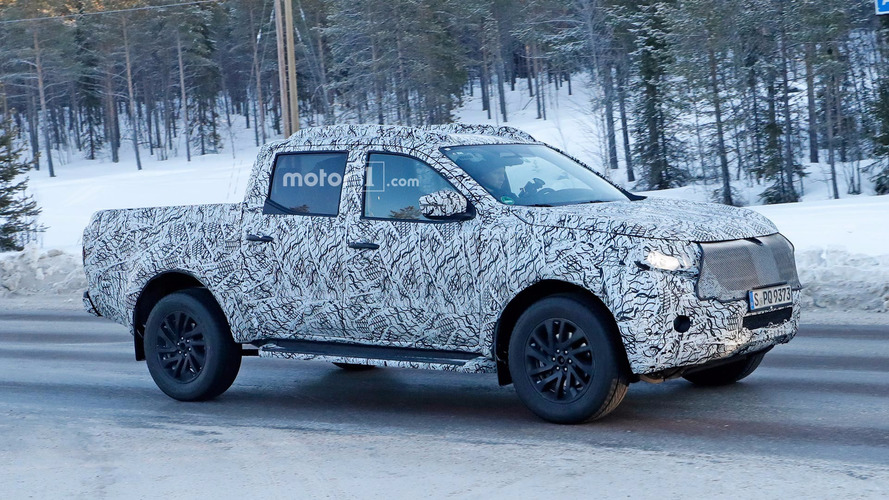 The truck doesn't wear too much camouflage, especially at the front. The nose takes strong cues from the previous concept.

While its still somewhat strange to think of the normally luxury-oriented Mercedes-Benz building a utilitarian pickup, a new gallery of spy photos shows that the X-Class project continues to develop the truck for the road. The latest pics even give us a better look at the production version’s design.

Mercedes’ camouflage largely exposes the X-Class’ grille. A pair of slats cut through it, and we suspect the cover in the center hides the brand’s star emblem. Slanted headlights give the truck a sporty appearance. Both of these design cues are also the company’s concept for the pickup.

In profile you can see the steeply raking windshield that makes the truck look more stylish than other entries in the segment. A slight slant for the cabin’s rear pillar also keeps the pickup from appearing too boxy. At least at this point, the concept’s bumper-integrated exhausts don’t appear to be on the production model.

The X-Class uses the same underpinnings as the Nissan Navara and Renault Alaskan. However, Mercedes is indicating the pickup would use the company’s own powertrains. One of the concepts had a turbodiesel V6 and boasted off-road capability from 4Matic all-wheel drive, an low-range transfer case, and differential locks for both axles. The truck had a maximum payload of 2,430 pounds (1.1 metric tons) in the bed and was able to tow up to 7,720 pounds (3.5 metric tons).

Mercedes won’t actually be building the X-Class. Instead, Nissan will build them in Barcelona, Spain for the European, Australian, and South African markets. Renault will also assemble them in Cordoba, Argentina, for Latin America. Production will reportedly get underway in 2018, so we’ll likely see the truck at an auto show sometime later this year. Dealers in the United Kingdom are already taking reservations from buyers.

Mercedes is abundantly clear that there is no current plan to bring the X-Class to the United States. The region’s pickup truck market is too competitive, and upcoming midsize entries like the Ford Ranger, which would compete against the Mercedes, mean that situation isn’t changing.

An AMG-tuned version of the truck also isn’t in the product plan, either.