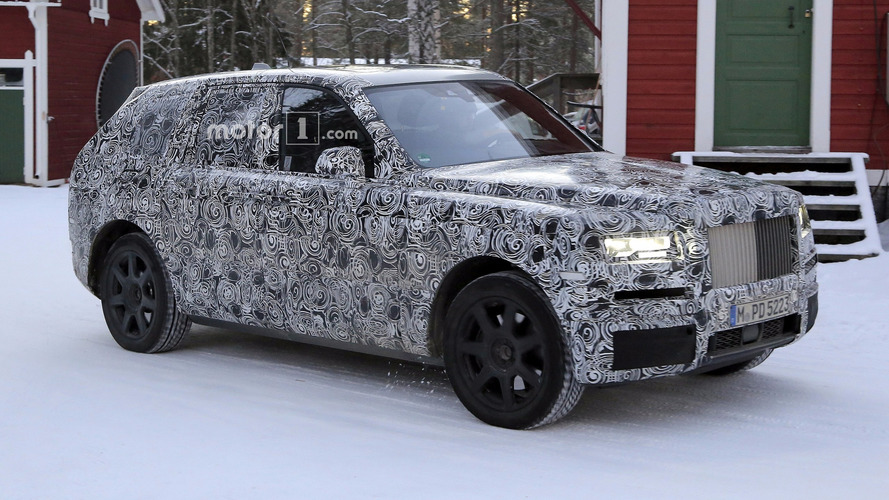 The Bentley Bentayga will finally have an adversary able to match its opulence.

Don’t call it an “SUV.” Instead, Rolls-Royce describes the “Cullinan” as being an “HSV,” where the acronym stands for “High-sided Vehicle,” not “Holden Special Vehicles,” obviously. Seen here is Goodwood’s luxobarge undergoing testing in northern Europe and carrying what appears to be the production body heavily influenced by the new Phantom, but with a considerably more generous ground clearance.

Bear in mind the boxy prototype is wearing two types of camouflage as the swirly pattern has been applied onto extra panels affixed using black rivets to the real production body. It’s the same story at the back where the massive tailgate has an extra layer of disguise and you can clearly see the test vehicle had a plastic rear window. Those circular taillights featuring a very basic design are provisional and are usually only used in the early testing phase, thus suggesting the Cullinan (name not final) won’t be out in the near future.

Indeed, Rolls-Royce has already announced its “HSV” is going to be introduced towards the end of 2018. When it will arrive, it’s going to ride on a newly developed aluminum spaceframe platform shared with the next-gen Phantom due later this year. An evolution of today’s 6.75-liter V12 engine will power the all-wheel-drive “Cullinan” set to receive some form of electrification further down the line.

A brand new suspension will give Rolls-Royce’s HSV a “magic carpet” ride both on and off road, although it’s safe to say owners won’t ever take it on unpaved terrain. Some of the hardware is going to be shared with the first-ever BMW X7 slated to go on sale in 2018, so it will get some bits and pieces from the CLAR platform combined with a new “architecture of luxury,” as described by RR’s boss Torsten Müller-Ötvös.

You might find it weird the prototype had not one, but two handles for each rear door. We’re willing to bet the ones at the back were fake taking into account Rolls-Royce has already announced the “Cullinan” will have the signature coach doors, which means the door handles for the front and rear doors are going to be joined like they are on the Phantom.

Expect more revealing spy shots to arrive in the months to come as Rolls-Royce will probably roll out more evolved prototypes.