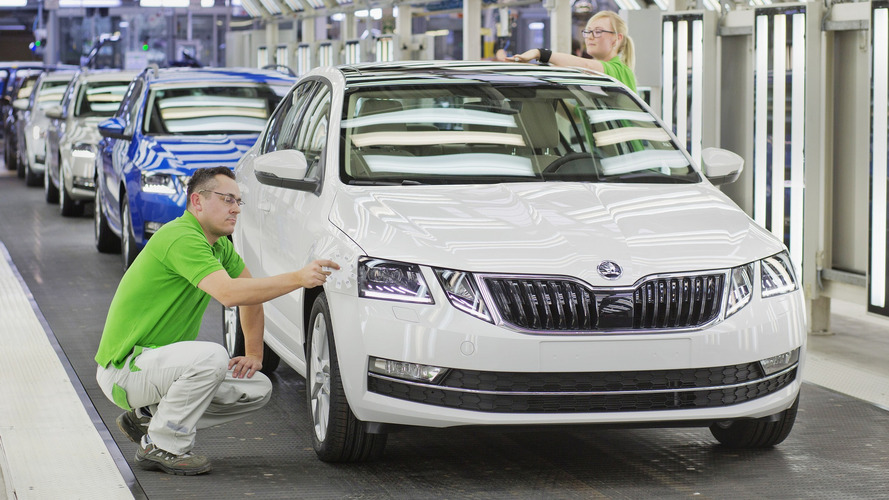 Even more photos and videos with Skoda's 'comprehensively upgraded' Octavia have been released.

Skoda’s core model has entered series production in the facelifted guise at the company’s main plant in Mladá Boleslav, Czech Republic. The heavily modified Octavia will also be produced as usual at the factories in Ukraine, Kazakhstan, Russia, and India, as well as at VW Group’s new factory in Algeria from later this year.

More than just a simple facelift, the 2017 Octavia brings an assortment of styling tweaks and hardware modifications. The most obvious change is noticeable at the front where Skoda’s designers have installed split headlights, which are now optionally available with full-LED technology. The hood has also been remodeled and it now has different creases, while both front and rear bumpers have gone through a nip and tuck as well. Rounding off the modifications are the lightly updated graphics of the taillights.

Rather unusual for a mid-cycle refresh, the Octavia’s rear track has been widened by 20 to 30 mm, depending on version. In the case of the hotter RS 230 and the RS 245 (pictured above), the rear track has been stretched by 30 mm. The most potent Octavia of all time has 273 pound-feet (370 Newton-meters) to offer and is available with an optional seven-speed, dual-clutch gearbox available alongside the standard six-speed manual. A 7-speed DSG has also been added to the rugged Scout sold exclusively with an all-wheel-drive layout.

Stepping inside the cabin, all versions are getting new infotainment systems with 8- and 9.2-inch displays and capacitive-only buttons, along with LED ambient lighting, two rear USB ports, heated steering wheel, and other niceties. Go for the more practical wagon version and Skoda will throw in a detachable LED flashlight as seen in the Superb Combi and more recently in the Kodiaq.

The revised Octavia is now safer than ever thanks to the addition of optional Blind Spot and Rear Traffic Alert, while Trailer Assist and Predictive Pedestrian Protection are also novelties.

Since the modern Octavia was launched in 1996, Skoda has sold more than five million units, thus making it by far the company’s best-selling model. The third generation has already racked up more than 1.4 million sales since its market launch in late 2012.

Ever wonder about the origins of the "Octavia" moniker? It means "the eighth" in Latin. Skoda decided to go with this nameplate back in 1959 when the original "Octavia" was introduced as the brand's eighth production model, which was basically an upgraded and renamed variant of the Skoda 440.

Mladá Boleslav, 8 February 2017 – The production of the comprehensively upgraded ŠKODA OCTAVIA was launched at the main plant in Mladá Boleslav today. With newly designed front and rear sections as well as state-of-the-art solutions for driver assistance systems, infotainment and connectivity, ŠKODA will continue the success story of the series. Over the past 21 years, more than five million buyers have opted for a model in the OCTAVIA family.

“With the start of production of the new OCTAVIA, we are looking at the next chapter in the success story of our bestseller. Our entire ŠKODA team, from technical development, purchasing, production and logistics to quality assurance, has again done a great job. The production launch of this model, which is very important for the brand, has been carried out reliably, qualitatively and in a timely manner,” says ŠKODA Board Member for Production Michael Oeljeklaus.

The ŠKODA OCTAVIA is now available with newly designed front and rear sections, as well as numerous attractive features. These include, among other things, headlights with full LED technology and other innovative solutions for safety and comfort. In addition, ŠKODA has equipped their bestseller with new connectivity options: ŠKODA Connect mobile online services, which are used for information, navigation and remote access to the car. As all ŠKODA OCTAVIAs, the new generation also sets standards in its segment in terms of space, functionality, safety and comfort technology, design and value for money. With the comprehensively upgraded ŠKODA OCTAVIA, the brand intends to continue the success story of the model series and further strengthen its position in the international markets.

The ŠKODA OCTAVIA is the Czech carmaker’s bestselling model. In the 21 years since its launch in 1996, over five million customers worldwide have opted for one of the numerous model versions in the OCTAVIA family. The first generation, which ran from 1996 to the end of November 2010, found over 1.4 million buyers. The second-generation OCTAVIA continued the success of the predecessor: between 2004 and 2013, ŠKODA sold a total of 2.5 million vehicles. The third ŠKODA OCTAVIA generation, which is the most important pillar of the ŠKODA model range, has been manufactured since November 2012. At the end of March 2016, the one-millionth vehicle of this model generation left the production halls in Mladá Boleslav. In total, almost 1.4 million vehicles of the third generation had been produced by the end of last year. In addition to production at ŠKODA's headquarters in the Czech Republic, the OCTAVIA is also manufactured in China, India, Russia, Ukraine and Kazakhstan. In addition, Algeria will be another production location for the upgraded ŠKODA OCTAVIA.