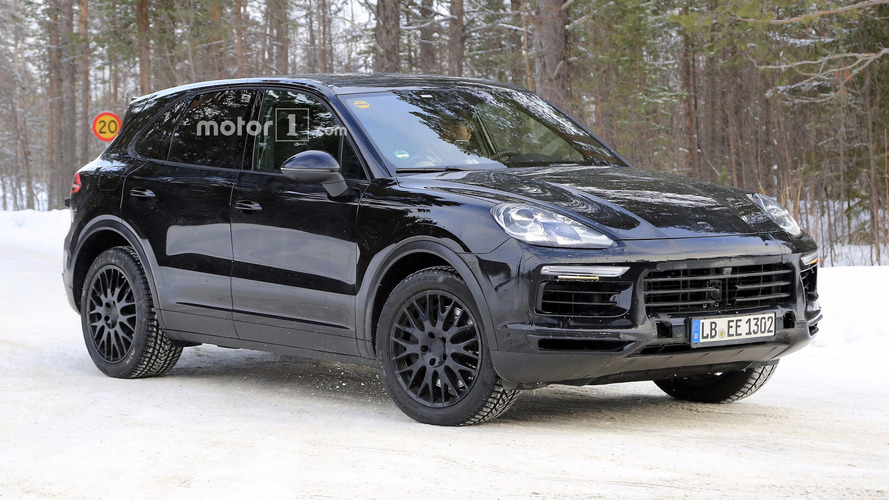 It may not look all that different on the outside, but the Cayenne is going through some major changes.

It was only a few days ago when Porsche introduced a Platinum Edition of its two Cayenne S models and now our spy photographers have spotted a barely camouflaged prototype of the next generation. At a first glance it may seem undisguised, but look closer and you’ll see the headlights and taillights are hiding their designs underneath stickers to make the clusters look like they’ve been sourced from the outgoing model. Some body-colored tape has also been applied onto the front bumper to conceal what will likely be some discreet changes.

Overall, the new Cayenne looks more like a facelift rather than a new generation, but don’t let the familiar design trick into believing it’s going to be more of the same. For starters, a massive weight loss is expected considering Stuttgart’s big high-riding vehicle will switch to new underpinnings estimated to shave off as much as 220 pounds (100 kilograms). That will obviously pay dividends in terms of performance to put the “S” in “SUV” and should also reduce fuel consumption and emissions.

A slightly more sloped roofline is already visible towards the rear and most likely Porsche’s engineers have stretched the wheelbase a little bit in order to free up more rear legroom. On the inside, previous spy shots have shown an overhauled dashboard derived from the new Panamera with a plethora of capacitive buttons and a large touchscreen for the infotainment system.

Besides the familiar crop of six- and eight-cylinder combustion engines shared with sister model Audi Q7 and next VW Touareg, it is believed the new Cayenne will spawn an all-electric derivative. Autocar reports the Mission E due in 2019 will lend its powertrain for a zero-emissions version of the Cayenne, which if green-lighted for production will likely come out towards the end of the decade.

Expect the third-gen Cayenne to be unveiled at the Frankfurt Motor Show in September, although an online introduction might occur a few weeks earlier. Meanwhile, the production-ready Lamborghini Urus set use just about the same underpinnings will be introduced in the coming months, while the aforementioned Touareg is also pinned for a late 2017 launch.