Toyota wants to charge your car on the go, while Tesla thinks your nav system should be smarter.

Each year, the U.S. Patent and Trademark Office approves over 300,000 patent applications (out of over 600,000 submitted). Obviously, not all of them turn into real-world products, but taking a peek at the things the automakers are researching, developing, and filing patents for is a way to try and understand our possible automotive future. As a first entry into a new series on EV patents, tere are a few interesting items about electric cars that have been approved recently, including wireless, in-motion charging, super smart navigation systems, and a way for you to tell your plugged-in EV to just chill out and wait a while.

Patent says: "A battery of a vehicle can be charged while the vehicle is traveling on a roadway. A driving environment of the vehicle can be sensed to detect a charging marker. The charging marker can provide information relating to a location of a charge transmitter located below a travel surface of the roadway. The charge transmitter can be located forward of the vehicle in the travel direction of the roadway."

What this might mean: Toyota has been testing wireless charging in its vehicles for a few years now, but that was for the boring kind that happens while the EV is parked. This new patent means that Toyota is thinking through what it will take for an electric car to get some juice while its in motion. This sort of work is being done at labs and universities around the world, but it's certainly not something that Toyota is talking much about in public. While there are a lot of challenges to make this sort of infrastructure work, it's tremendously exciting to imagine a zero-emission vehicle with endless range. 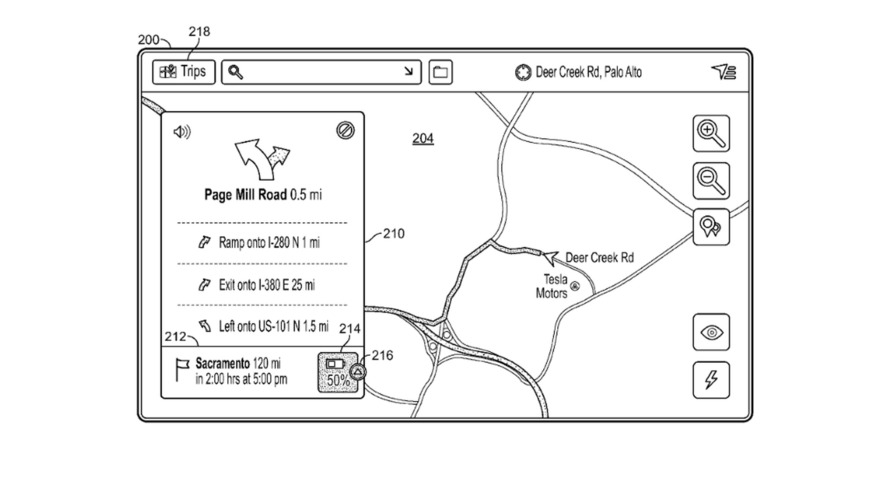 Patent says: "A method includes: receiving information corresponding at least to (i) a state of charge of an energy storage of a vehicle, (ii) route information corresponding to a planned driving route for the vehicle, and (iii) a predicted driver characteristic; determining using the received information, and presenting to a driver of the vehicle, a first energy-versus-distance measure for the planned driving route; receiving a user input indicating a proposed change in at least the driver characteristics, and determining using the received information and the user input, and presenting to the driver, a second energy-versus-distance measure for the planned driving route that takes into account the proposed change."

What this might mean: Better range estimates. The nav system knows where you are, where you're going, and how much energy is in the battery. If it doesn't think you'll make it, it will ask you to find a charging point or suggest one. Thanks to "hindsight energy consumption," the system gets a better handle on how the driver is doing compared to how the system thought he or she would do. Basically, it constantly updates to make sure you don't get stranded - as long as you listen to the car.

As a bonus, Tesla takes a little pot shot at fossil fuel vehicles in the patent filing, saying, "Whatever the type of engine that propels the vehicle, energy must be replenished from time to time in order to continue driving. For example, some vehicles rely on an all-electric drivetrain that is powered by energy stored in a battery, while other vehicles use a hybrid engine or even a combustion engine dependent on burning fossil fuel."

Patent says: "An electric vehicle display system may include a battery, an interface configured to present at least one selectable icon configured to control a battery powered vehicle feature, and a controller programmed to, in response to state-of-charge (SOC) data indicating that a trip range exceeds a possible driving range, update the selectable icon to indicate a suggested adjustment to the vehicle feature to decrease power demand of the feature."

What this might mean: If you've told your all-electric vehicle's nav system that you want to go on a 50-mile trip, but the car thinks you've only got 35 miles in the battery, the car could use an animated icon to, "encourage driver behavior and interaction with certain vehicle features that affect the battery [state-of-charge]." In other words, your dashboard may light up with a bouncing button saying you should reduce the fan speed or seat heater or "[opt] to use the gas engine instead of the electric motor. This situation may be desirable upon entering a highway which may put more demands on the battery and may result in sub-optimal efficiency. The driver may elect to use the gas engine and save the battery power for when driving at lower speeds." Think of it as the Clippy of maximizing your range. 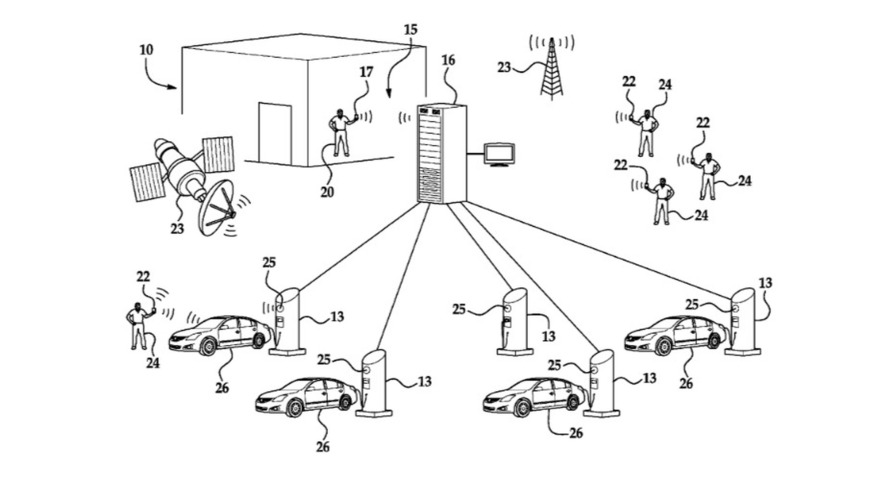 Patent says: "To control and help reduce power consumption by a facility that has a plurality of EV charging stations, the present disclosure utilizes a system that includes a management device associated with the facility, a user's device, and a proximity device associated with one of the EV charging stations. The system performs a method that includes receiving an identification signal that is used to identify a set of users whose vehicles are connected to the plurality EV charging stations. The method also includes determining when a current level of power consumption by the facility exceeds a first threshold. A halt signal including a halt charging request message is transmitted when the current level of power consumption by the facility exceeds the first threshold level."

What this might mean: When out and about and using a public charger, some EV drivers will not mind if their plug-in vehicles take longer to charge. They're going to do dinner and a movie, so if their Leaf isn't recharged until 11 pm, that's just fine. Or maybe they're employees who have 8-10 hours before they're ready to leave. Nissan wants to ask them, hey, can the charging operators here at the mall put your EV to the back of the queue since we've got a lot of other EV drivers who want to be full by 9 pm? Drivers would be notified on their phones and be able to accept the delayed charge because, Nissan says, "A problem exists with the current EV charging stations associated with a facility in that a high level of power demand and consumption may occur within a narrow period of time."