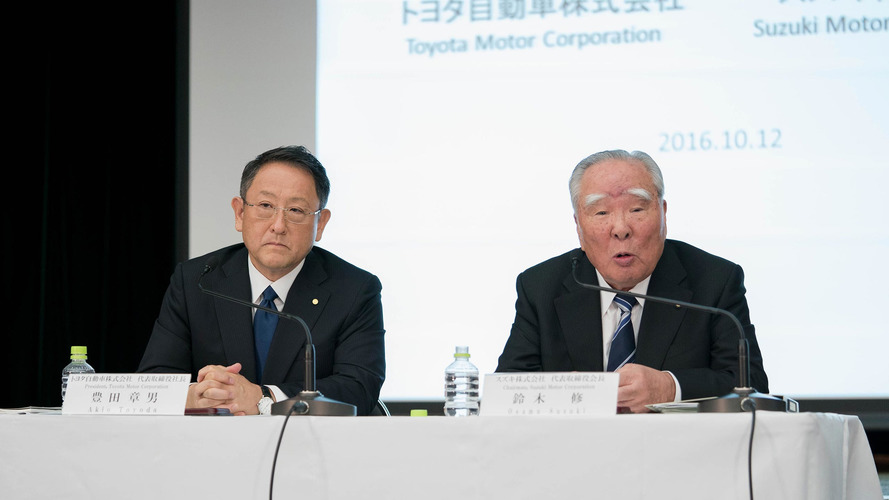 The automakers looking at several different areas for possible cooperation, including safety tech and component sharing.

Toyota and Suzuki continue to forge a tighter bond thanks to a new agreement that as the Japanese automakers looking towards a future business partnership. The firms' leaders (pictured together above) are now investigating possible collaborations on “environmental technologies, safety technologies, information technologies, and mutual supply of products and components.”

Rumors in Japanese media suggest that Toyota and Suzuki could agree to a technological partnership first that would have the automakers developing autonomous driving systems together, according to Automotive News.

Toyota is already pushing ahead with self-driving tech and has a goal eventually of offering a vehicle that’s incapable of causing a crash. The firm’s Yui artificial intelligence system on models like the Concept-i might eventually make the dream into a reality by actively monitoring traffic.

More News about Toyota and Suzuki:

As a much smaller automaker than Toyota, Suzuki hasn’t been quite so quick to latch onto autonomous tech. However, a recent nomination for the Ignis as 2017 World Urban Car shows that the Japanese brand still knows how to make a compact model that critics love.

Suzuki and Toyota first announced the possibility of this deal in October 2016. At the time, the automakers said they were looking to cooperate in developing “environmental, safety, and information technology.” The discussions came from Suzuki’s desire to keep up with the rapidly changing times in the auto industry, and Toyota’s wish to form more partnerships.

Toyota has been rapidly becoming a larger player in Japan’s auto industry. For example, the company bought all of Daihatsu’s shares in early 2016 and completely took over the firm. A new business plan aims to focus compact models on emerging markets.

Toyota and Suzuki Conclude Memorandum toward Business Partnership
Two Sides to Explore Possibility of Cooperation in Areas Including Environment and Safety, IT and Mutual Supply of Products and Components
Tokyo, Japan, February 6, 2017—Toyota Motor Corporation (Toyota) and Suzuki Motor Corporation (Suzuki), with an aim to jointly contribute to resolution of social issues and achievement of sound and sustainable development of an automobile-based society, concluded a memorandum today on beginning concrete examinations for business partnership.

Toyota and Suzuki have agreed to start exploring ideas directed toward business partnership, as announced on October 12, 2016. Since then, the companies, have shared with each other their challenges and have been discussing areas of collaboration in a manner that ensures fair and free competition. The companies agreed today to begin concrete examinations toward the realization of business partnership in areas including environmental technologies, safety technologies, information technologies, and mutual supply of products and components.

Toyota and Suzuki have agreed to work toward the early realization of business partnership. To that end, the two companies are to immediately establish an implementation framework aimed at bringing to realization the points agreed on today.

Toyota President Akio Toyoda said: “The words of Chairman Osamu Suzuki at our joint press conference in October last year—‘If you are running a company, you have to continue to take on challenges. You are running your company for the benefit of society, and this remains unchanged.’—deeply resonated within me. This, I felt, was indeed the spirit of (the local expression) “Let’s do it”. Both of our companies, which trace their roots to Enshu (the western part of Shizuoka Prefecture), intend to apply to the fullest the spirit of “Let’s do it”, and we want to cooperate toward enabling all people throughout the world to truly experience the joy of mobility and to achieving a society of future mobility full of smiles. I am truly thankful for having been given this opportunity to work together with a company such as Suzuki, which overflows with the spirit of challenge. Toyota looks forward to learning much.”

Suzuki Chairman Osamu Suzuki said: “Under the leadership of President Akio Toyoda, Toyota was enthusiastic throughout our discussions regarding partnership, even though such was sought by Suzuki, which was concerned about the development of advanced technologies. I want to express my heartfelt appreciation. In response to Toyota’s display of enthusiasm, Suzuki also intensively engaged in the discussions, and we now stand at the starting point for building a concrete cooperative relationship. I want to give this effort our fullest and to aim at producing results that will lead Toyota to conclude that it was the right thing for Toyota to have decided to work together with Suzuki.”
END