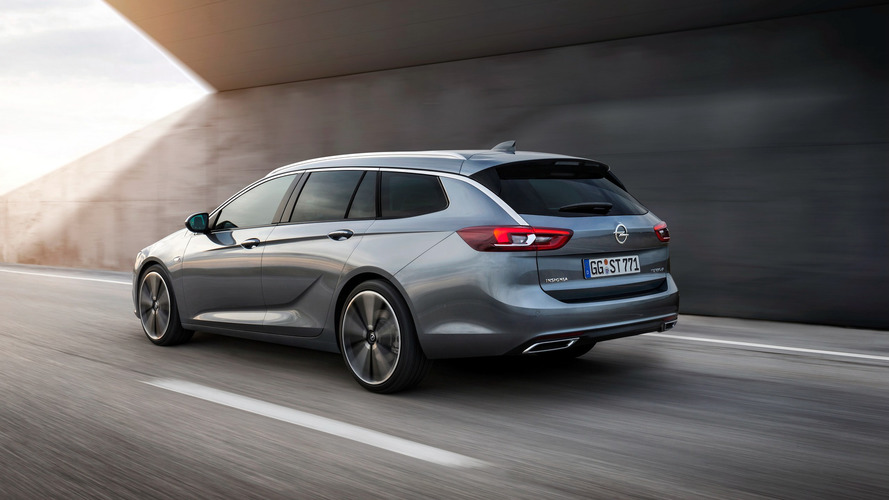 A couple of months ago, General Motors unveiled the all-new Opel Insignia Grand Sport together with the Vauxhall-badged model and the equivalent Holden Commodore. For those who want more than the 490 liters of cargo capacity provided by the midsize sedan with the rear seats in place, the wagon has an extra 30 liters for a grand total of 520 liters. Coincidentally, it is exactly the same as the old Insignia. The good news is folding down the 40:20:40 rear seats will free up a cargo capacity of 1,638 liters, representing a 108-liter increase over the model it replaces.

As you would imagine, everything else is basically carried over from the sedan, so it gets the same new underpinnings shaving off up to a massive 200 kilograms (441 pounds) of fat compared to the old Insignia Grand Sport. The weight loss is even more impressive considering the new model is 73 mm (2.9 inches) longer at 4,986 mm (196.2 inches) and thanks to better packaging the wheelbase has been stretched by 92 mm (3.6 inches), while the trunk loading length has been extended to over two meters.

Just like with the Insignia Grand Sport, its more practical sibling will have a front-wheel-drive layout in the lesser versions of the range while the more expensive ones are getting AWD with torque vectoring. At an additional cost, buyers will be able to opt for the newly developed matrix LED headlights equipped with 16 light-emitting diodes in each cluster.

GM isn’t ready to talk just yet about what powers the Opel and Vauxhall versions, but we do know the 2018 Holden Commodore Sportswagon in flagship guise will get a V6 with 308 horsepower (230 kilowatts) and 273 pound-feet (370 Newton-meters) of torque. Adaptive dampers and an eight-speed automatic transmission are on the agenda, as is the power liftgate by waving your foot underneath the rear bumper.

The Insignia-badged sedan and wagon models are going to bow next month at the Geneva Motor Show before going on sale later this year. As for the Commodores, these are slated to go on sale early next year and will be imported from Germany rather than being locally assembled.