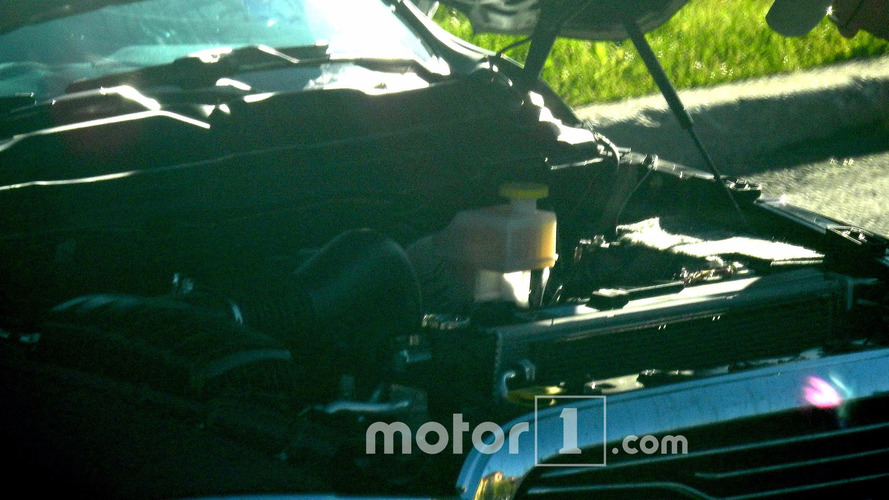 Would you buy a Ram 1500 with a four-cylinder under the hood? These shots suggest it might be an option soon.

At least for now, fuel economy regulations in the United States only look to get more stringent in the future, and automakers are coming up surprising methods to meet the upcoming standards. For example, check out these shots of this Ram 1500 while under development. That’s not a V8 or even a V6 under the hood. According to our spies, it’s a four-cylinder.

The grainy images make clearly seeing the engine difficult, but the mill is definitely not something you’d usually see in a pickup. Our spies theorize that the powerplant could be the Hurricane 2.0-liter turbocharged four-cylinder that’s also going into the next-gen Jeep Wrangler. The powerplant reportedly uses tricks like a twin-scroll turbo, direct injection, an aluminum block, and variable valve timing to produce around 300 horsepower (224 kilowatts). Rumors indicate the power would route through an eight-speed automatic.

For reference, the 3.6-liter V6 that’s currently the smallest displacement gasoline-fueled mill in the Ram 1500 produces 305 hp (227 kW) and 269 pound-feet (365 Newton-meters) of torque. The most economical layout with this powerplant can get 20 miles per gallon combined. The new four-cylinder would make practically as much power and would likely have better mileage.

Spy shots last summer revealed the Hurricane four-cylinder in a Wrangler. However, development still appeared to be in the early stages because photos really only showed a rat’s nest of hoses hiding the engine.

The latest reports and spy shots indicate that we should see the next-gen 1500 for the 2019 model year. The company already confirms that new engines and a mild hybrid would eventually be in the powertrain range. A leaked dealer presentation also suggests the upgraded styling includes a more angular front end and chiseled rear.

Ram intends to keep the current Ram 1500 in production even when the next-generation example is on sale. Before the new model debuts, recent spy shots suggest the company is prepping a Mega Cab body for the present truck. The larger cabin would mean more room for second-row passengers.