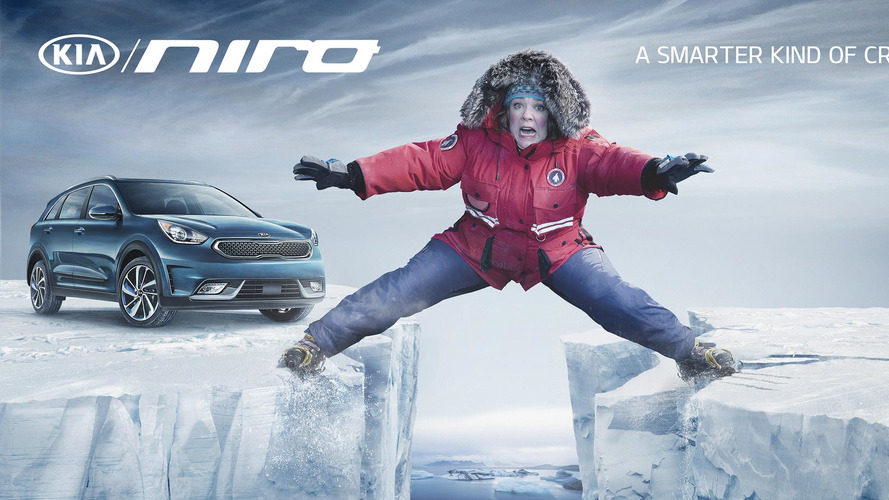 McCarthy is funny in the ad when she's using the hybrid compact crossover to try to help the world, but nature fights back.

The Super Bowl is still a few days away from kicking off, and Kia is now the latest brand to unveil its ad early. The previously teased spot stars comedian Melissa McCarthy getting into dangerous, though humorous, situations with her Kia Niro. The commercial called Hero’s Journey premieres during the third quarter of the game.

McCarthy plays a good-hearted person who only wants to help the world in her Kia Niro hybrid crossover. However, not everyone wants her help. For example, a whale flings her against the side of a ship and an angry rhino carries her with its horn.

The driving beat of Bonnie Tyler’s I Need a Hero works extremely well in the light-hearted commercial. Since “hero” and “Niro” sound alike, it’s also a fitting song for selling this crossover.

“For years, I’ve been trying to find the perfect project that combined the real threat of me breaking every bone in my body, with my desire to help save the environment. Thanks Kia,” McCarthy joked in the company’s announcement about the ad.

Kia is also looking to increase viewer engagement in the ad through the NiroBot for Facebook Messenger. By checking the service out during the Super Bowl people can win 40 props and other items from the commercial’s set.

The Niro arrives at dealers in the U.S. very soon, and prices for them start at $23,785 after destination. All models use a 1.6-liter four-cylinder and an electric motor for a total system output of 139 horsepower (104 kilowatts) and 195 pound-feet (264 Newton-meters). A six-speed dual-clutch gearbox sends power to the front wheels. Fuel economy varies with the trim level, but most trim have combined ratings of 49 or 50 miles per gallon.

Kia has also released longer clips with McCarthy showing off some of the Niro’s tech. You can check them out below. 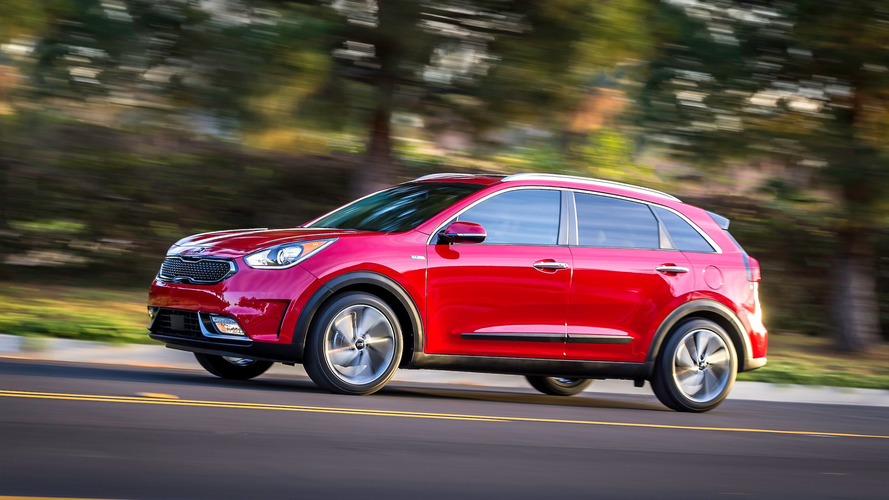 Multifaceted Campaign Introduces Consumers to the No Compromise Combination of Style, Utility and Hybrid Efficiency of Kia’s Newest Crossover

“Hero’s Journey” can be viewed now at YouTube.com/Kia and is set to air during the third quarter of Super Bowl LI
Consumers engaging with Kia’s NiroBot for Messenger during the big game can win props from the set of the commercial as well as other items and prizes

IRVINE, Calif., February 1, 2017 – A breaching whale. A falling tree. A charging rhinoceros. These are just some of the extreme challenges Melissa McCarthy faces in Kia Motors’ Super Bowl ad for the all-new 2017 Niro crossover. Debuting online today, “Hero’s Journey” is scheduled to air in the third quarter of the big game and finds McCarthy – who is only “trying to help” – braving the open ocean, climbing high up into the treetops, and traveling in the Niro, the most fuel efficient crossover in America1.

With a hilarious and courageous leading lady who is ready, willing and able to pitch in and do her part for just about anything, “Hero’s Journey” is fantasy adventure at its finest and the centerpiece of a multifaceted campaign showcasing the all-new Niro as a no-compromise package combining driving enjoyment with eye-catching design, functional utility and record-setting fuel economy. Created by David&Goliath, KMA’s advertising agency of record, the spot will entertain across multiple platforms before and after the Super Bowl.

“For years, I’ve been trying to find the perfect project that combined the real threat of me breaking every bone in my body, with my desire to help save the environment. Thanks Kia!!!  XOXO Love, Melissa,” said McCarthy.

As part of the spot’s rollout, Kia was the first advertiser to debut a Super Bowl commercial on Facebook Messenger. During the big game on Sunday, consumers engaging with the interactive NiroBot for Messenger will have the opportunity to win MPGs (“Melissa’s Precious Gear”), including more than 40 props and assorted items from the set of the commercial.

“People will go to great lengths to support the causes they are passionate about, and the Niro is a ‘smarter kind of crossover’ for those looking to go green without making sacrifices,” said Michael Sprague, chief operating officer and EVP, Kia Motors America. “The Niro is like nothing consumers have seen before, and with an audience of over 100 million people tuning in, Melissa McCarthy is the perfect partner to tell the world about Kia’s uniquely alluring yet practical new crossover.”

A key component to Kia Motors’ Green Car Roadmap, the Niro strikes the perfect balance for today’s consumers and stakes claim to a unique position between the hybrid-electric vehicle and CUV segments. As part of Kia Motors EcoDynamics philosophy, the Niro represents an important next step on the path to nearly tripling the brand’s global green car line-up by 2020.  A plug-in hybrid powertrain is due to be added to the car’s line-up later in its life-cycle.

Headquartered in Irvine, California, Kia Motors America is the marketing and distribution arm of Kia Motors Corporation based in Seoul, South Korea. Recognized as one of the 100 Best Global Brands and 50 Best Global Green Brands by Interbrand, Kia proudly serves as the "Official Automotive Partner" of the NBA and LPGA and offers a complete range of vehicles sold through a network of nearly 800 dealers in the U.S., including cars and crossovers built at North American manufacturing plants in West Point, Georgia* and the municipality of Pesqueria in the state of Nuevo Leon, Mexico.

For media information, including photography, visit www.kiamedia.com.  To receive custom email notifications for press releases the moment they are published, subscribe at www.kiamedia.com/us/en/newsalert.

* The Sorento and Optima GDI (EX, SX & Limited and certain LX Trims only) are assembled in the United States from U.S. and globally sourced parts

Press Release Information Accuracy DisclaimerInformation posted in press releases on the Kia Media website was accurate at the time of posting but may be superseded by subsequent releases or other information.