Wacky Races comes back to life thanks to handmade Lego models 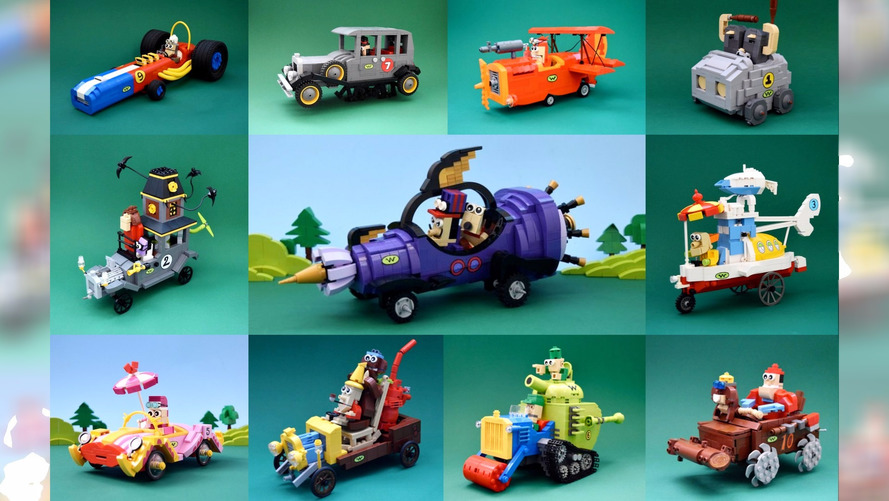 Most of our readers are probably too young to have watched Wacky Races, a cartoon created in 1968, but that is no excuse for ignoring Dick Dastardly, Muttley, Peter Perfect, Penelope Pitstop, and many other great characters presented there by Hanna-Barbera. It's a fact that most people, from all ages, have watched it at least once. And not only know the series, but also never miss a chance to watch an episode that may happen to be on the TV. British artist Martin Redfern has decided to have fun with the classic cartoon in a different and very original way: by recreating all 11 characters from Lego pieces.

"The first one I made was the Army Surplus Special." Redfern told us. "Once I had worked out how to make the turret hatch (Lego does not make every shape in lime, limiting the build design), the rest took me around two to maybe four hours or so to build. At this point, I would only check the parts that needed some refining (positioning of the bricks or replacing them with newer or at least the best condition bricks possible)."

If you have already checked the pictures, you must have noticed the artist haven't used standard Lego pieces. "I then tried some, but they were not quite big enough. Making my own figures for this added about another hour to the build." That's why the result is much more faithful to the original characters. "I'm really glad I built my own figures. If I had used official figures in the Army Surplus Special (albeit, if the right scale), it would have limited me throughout the whole series of racers. And it would have left me knowing these could be better if custom figures where available. Knowing this is not the case, the only way forward was to brick-build each character individually. And now, thinking about it, characters such as Muttley (my personal favorite) would have proved difficult to replicate."

Not having a huge source of Lego bricks was one of the biggest challenges the British artist faced. "People who know me are aware I don't have a lot of Lego bricks: 9 out of the 11 cars where all built with what I have in stock. And yes, there have been a lot of compromises involved. For instance, each character was made with whatever I had. Some could be better. The piece I used for the nose on the Red Max was the only one I had. I would have used one on Peter Perfect if I had another."

Besides building Lego models, Redfern also works with FIMO, a sort of plastic clay, with which he has created these Volkswagen Buses (picture above). "They contain every detail possible (including a guy on the toilet smoking a cigarette). The ambulance took me 90 hours to make, and has 900 parts. All of them have working suspension and more (they are as close to a real one as possible). Restoring a real one of these vans was easier than making these out of FIMO!".

Redfern is based in Liverpool, but now lives in Nottinghamshire. He will be 50 year-"young" (as he puts it) in March and shares his passion for Lego with his 12 year-old boy, Louie. We're sure Louie is also a fan of Wacky Races, as we are. And of his father's work, which we came to admire as well.