Several scores kept the Model S from getting the TSP+ designation. The i3 was quite close to receiving the honor.

Update: Tesla has released a statement about the Model S' performance in the IIHS evaluations. "We are committed to making the world’s safest cars, and Model S has previously received a 5-star safety rating from the National Highway Traffic Safety Administration and a 5-star rating from Euro NCAP. Model S still has the lowest ever probability of injury of any car ever tested by NHTSA." The full text is in the press releases section below.

BMW also responded to the results. "We narrowly missed the IIHS rear impact test rating of 'Good' and therefore the BMW i3 does not achieve a IIHS Top Safety + rating. However, the BMW i3 with its carbon-fiber structure is designed to meet and exceed global safety standards."

The Tesla Model S and BMW i3 didn't receive the Insurance Institute for Highway Safety’s Top Safety Pick+ honor in a recent round of crash tests for electrified vehicles. Neither model was able to score Good ratings in all of the agency’s collision evaluations – a requirement for receiving the award.

"We hope Tesla and BMW will continue to refine the designs of their electric models to maximize driver protection and, especially in the case of Tesla, improve their headlights,” said David Zuby, IIHS executive vice president and chief research officer, in the announcement. 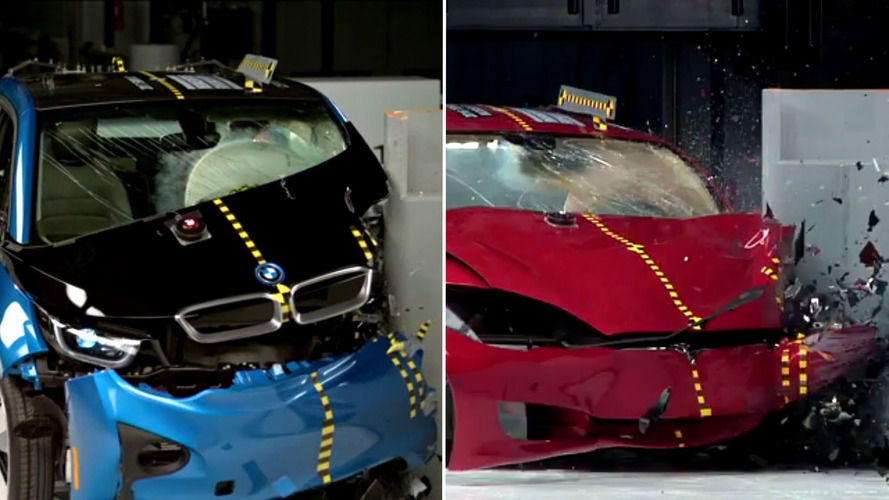 The Model S fell short of the TSP+ rating by receiving less-than-perfect marks in several tests. In the small overlap front crash test, the EV received an Acceptable rating because the seatbelt let the dummy’s body move too far forward allowing its head to hit the steering wheel through the airbag, and sensors showed likely injury to the lower right leg.

The Acceptable rating applies to the Model S with production dates from October 2016 to January 23, 2017. Tesla claims a production change addresses the issue, and IIHS plans to test the improved sedan as soon as it gets one.

The IIHS also found that the range-topping Model S P100D had Acceptable roof strength, while other variants received the top Good score. The difference was because the P100D's batteries, which made the vehicle heavier.

Regardless of whether the Model S has the optional curve-adaptive headlights, IIHS gives them a Poor score (the group’s lowest rating). For both the low and high beams, visibility was fine when going straight but was in inadequate when turning in all four of the agency’s evaluations.

The Model S also does not yet have a rating for its front crash prevention. According to IIHS, “while automatic braking equipment comes standard, Tesla hasn't yet activated the software for all vehicles.” 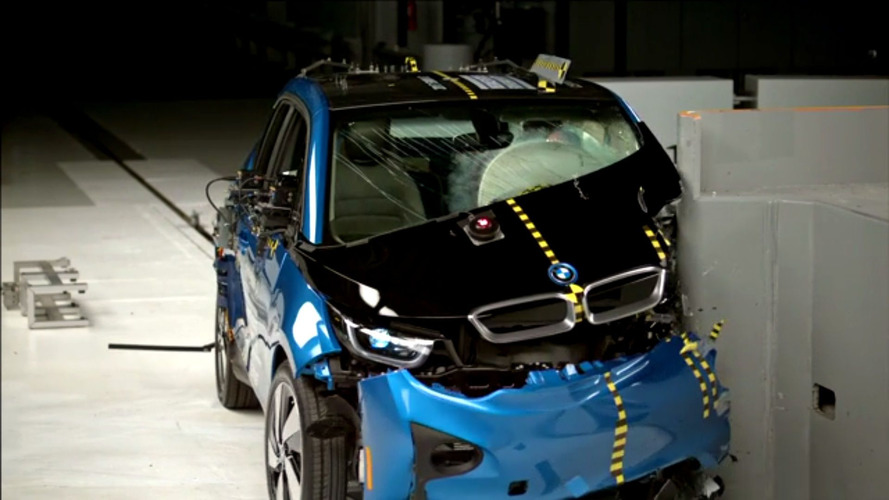 The i3’s major crash safety setback came from its head restraints that scored an Acceptable rating. The evaluation checks a vehicle’s ability to protect against neck injuries in a rear-end collision. “While such injuries are rarely fatal, they are the most common type of crash injury and can cause debilitating pain,” IIHS reported.

If not for this setback, the i3 would have received a TSP+ rating. The IIHS rated its front crash prevention system as Advanced and headlights as Acceptable.

To receive the Top Safety Pick designation, a model needs top scores in the five crashworthiness evaluations and must have a front crash prevention system with an Advanced or Superior rating. TSP+ is for vehicles meeting those criteria and with Good or Acceptable results for the headlights.

The two recently evaluated 2017 all-electric models are the Tesla Model S and the BMW i3. The plug-in hybrid models are the Chevrolet Volt, whose award was announced in December, and the Toyota Prius Prime.

"There's no reason the most efficient vehicles can't also be among the safest," says David Zuby, IIHS executive vice president and chief research officer. "We hope Tesla and BMW will continue to refine the designs of their electric models to maximize driver protection and, especially in the case of Tesla, improve their headlights."

To qualify for TOP SAFETY PICK, a vehicle must earn good ratings in all five crashworthiness evaluations — small overlap front, moderate overlap front, side, roof strength and head restraints — and have an available front crash prevention system that earns an advanced or superior rating. The "plus" is awarded to vehicles that meet all those criteria and also come with good or acceptable headlights (see "In the best light: 2017 TOP SAFETY PICK+ winners meet new headlight criteria," Dec. 8, 2016).

The Model S, a large luxury sedan, earns good ratings in all IIHS crashworthiness evaluations except the challenging small overlap front crash test, in which it earns an acceptable rating. Despite lengthening the side curtain airbags to improve small overlap protection in the Model S, Tesla ran into problems in the test when the safety belt allowed the dummy's torso to move too far forward. That allowed the dummy's head to hit the steering wheel hard through the airbag. Measurements from the dummy indicated that injuries to the head, along with the lower right leg, would be possible in a real-world crash of the same severity.

The ratings for the Model S apply to 2016 and 2017 cars built after October 2016. Tesla says it made a production change on Jan. 23 to address the head-contact problem, and IIHS will test the updated vehicle for small overlap protection as soon as it can be delivered.

Although the i3, the Volt and the Prius all did better in the small overlap evaluation than the Model S, the results can't be compared because the Model S is larger than the others. Since the kinetic energy involved in a front crash depends on the speed and weight of the vehicle, the Tesla's acceptable rating is based on a more severe crash than the good ratings of the lighter cars.

One version of the Model S, the P100D, also falls short on roof strength, which is important for protecting people in a rollover crash. The rating is based on a strength-to-weight ratio. The P100D has the same roof structure as other Model S versions but is heavier, due to a larger battery, so it earns an acceptable rating.

The current version of the Model S hasn't yet been rated for front crash prevention. While automatic braking equipment comes standard, Tesla hasn't yet activated the software for all vehicles.

The 2017 Model S isn't available with anything other than poor-rated headlights. Tesla says it is working with its supplier to improve the headlights, and IIHS will evaluate the new ones when they are available.

The i3, a small car, fails to reach the winner's circle because it rates only acceptable in the head restraint and seat evaluation, which measures a vehicle's ability to protect against neck injuries in a rear crash. While such injuries are rarely fatal, they are the most common type of crash injury and can cause debilitating pain.

The i3 earns good ratings in the other crashworthiness tests and is available with an optional front crash prevention system that earns an advanced rating. The system reduced the impact speed by an average of 9 mph in the 12 mph track test and by 7 mph in the 25 mph test. Its warning component meets National Highway Traffic Safety Administration criteria.

The i3's only available headlight system earns an acceptable rating.

"BMW clearly thought a lot about safety when designing the i3," Zuby says. "It's a shame that it missed the mark on head restraints, which is something most of today's vehicles get right. Among small cars, the i3 is the only 2017 model that doesn't earn a good rating."

The Prius Prime is the plug-in version of the Prius hybrid, also a TOP SAFETY PICK+ winner. Its standard front crash prevention system earns a superior rating, and its only available headlights earn an acceptable rating.

IIHS plans to test another green car, the all-electric Chevrolet Bolt, once it becomes widely available later this year.

"We are committed to making the world’s safest cars, and Model S has previously received a 5-star safety rating from the National Highway Traffic Safety Administration and a 5-star rating from Euro NCAP. Model S still has the lowest ever probability of injury of any car ever tested by NHTSA.

We proactively develop updates and aggressively implement changes onto the production line in record time any time there is a substantial benefit to customer safety. One of the improvements recently introduced in January 2017 specifically addresses the “Acceptable” (or second highest) rating that the Model S achieved in the small overlap frontal crash test, and we expect new tests to yield the highest possible rating (“Good” rating) in the crashworthiness category.

Additionally, IIHS tested a vehicle that was in transition with new Autopilot hardware, but without the new software that enables Automatic Emergency Braking. In the coming weeks, Automatic Emergency Braking will be deployed via a free over-the-air software update, and IIHS will be testing a new vehicle. We expect to receive the highest possible rating in every category, making Model S eligible for the IIHS Top Safety Pick award."