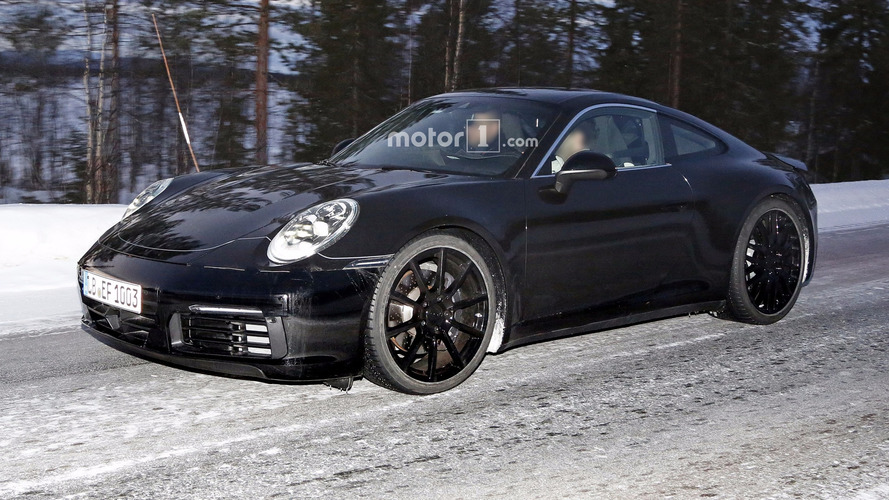 The 992 returns in the most revealing set of spy images to date.

[UPDATE] 38 additional spy shots have been added and these are showing different prototypes.

Ever since its inception back in the early 1960s, the Porsche 911 has always been about evolution rather than revolution. It’s going to be the same story with the new one spotted here featuring a very familiar design, but with a more modern take on the taillight arrangement inspired by the stunning 2015 Mission E concept. The third brake light seems to be a provisional add-on piece, so expect the final production model to have a much better integrated solution.

Also noticeable is the wide spoiler extending over the entire width of the rear end, while the camouflage applied onto the edge of the rear quarter windows suggests some changes are in tow in that area. Showing visible signs of growth, the 992 appears to be wider than the current model and has beefier front and rear fenders with bulging wheel arches. Wider tracks at both axles are likely on the agenda, and there also might be a minor wheelbase stretch.

While the previous prototype was likely based on the Carrera 4, this time around we are probably dealing with a stronger Turbo/Turbo S version of the Nine Eleven judging by the large air vents. The test vehicle was spotted in northern Scandinavia and was equipped with a roll cage inside the cabin where the dashboard remained concealed underneath a black fabric.

Porsche has already confirmed the new 911 will embrace hybrid tech, but it will not spawn an all-electric derivative because the Stuttgart-based marque believes it doesn’t make sense for the time being.

The next-generation 911 will debut in the second half of 2018 and go on sale before the year’s end, with the all-electric Mission E sedan to follow in 2019.

Meanwhile, the current 991 generation still has plenty of life in it considering the facelifted GT3 and the hardcore GT2 will be unveiled in the months to come.