Several of the rugged SUVs show up together in this clip.

Mercedes-Benz’s engineers continue to conduct cold-weather tests on the next-gen G-Class, and a new spy video lets us see a few more of them on the move. The grumbling exhaust note suggests this might even be the G63.

The boxy styling on these models appears to be largely the same as in previous spy shots and video. However, this clip includes a long look at one with the rear cargo door open. The engineers don’t appear to be having any problems with storage space back there. 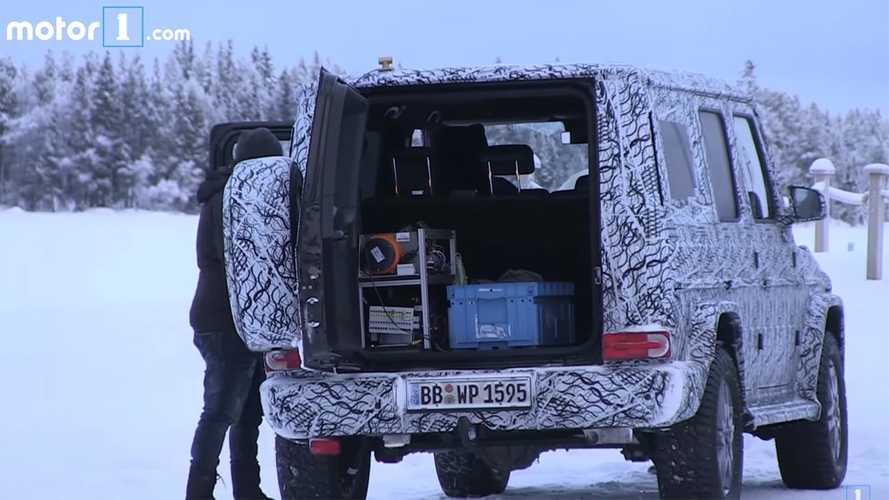 The new G-Class is reportedly wider and longer than the existing model, and the examples in this video definitely appear bigger than what is currently on sale in showrooms. The extra size shouldn’t translate to more weight because Mercedes is reportedly moving the SUV to a more modern platform. Rumors claim the changes could slice off 440 pounds (200 kilograms) or as much as 900 pounds (408 kg).

Under the hood, expect tunes of Mercedes’ 4.0-liter biturbo V8 to arrive in more trims, including replace the current 5.5-liter biturbo V8 in the G63. Based on this video, the engineers appear to be tuning the exhaust for a snarling sound that matches the model’s rugged demeanor. Depending on the model, Mercedes currently offers the 4.0-liter unit with between 470 horsepower (350 kilowatts) and 603 hp (450 kW), so the company wide range to pick from for variants of the G-Wagen.

We have been seeing the G-Class testing for months, including long-wheelbase and pickup variants. An official debut should finally happen sometime later this year, but we might have to wait until 2018 to get a look at the AMG variants. Magna Steyr in Austria has the contract to assemble them. After building them there successfully for decades, Mercedes has no reason for finding a new partner now.

More News about the next G-Class: