To give this guy the benefit of the doubt, he might have at least some excuse for this seemingly boneheaded decision.

Sometimes you see someone so obviously making a horrible decision that you wonder what’s going through the person’s head. This clip of a man in a Nissan pickup becoming stranded on Humboldt Bay’s North Jetty in California during huge waves is one of those situations. We all make bad choices, but this seems like easily avoidable trouble. A bystander watching the huge waves shot this incredible video. The area was under a high surf advisory by the National Weather Service at the time of this incident, according to The Lost Coast Outpost.

Within 30 seconds of this video starting, we see this guy definitely needs to turn around because a huge wave engulfs his pickup. The intrepid driver keeps going, and soon the breakers are pushing his truck around on the narrow path like it’s a toy. Against all common sense, he keeps going a little more. Eventually, the guy finally realizes the danger of the situation and tries to turn around. Even larger swells then crash into the Nissan, and they are too much for the pickup because the vehicle doesn’t move after that. 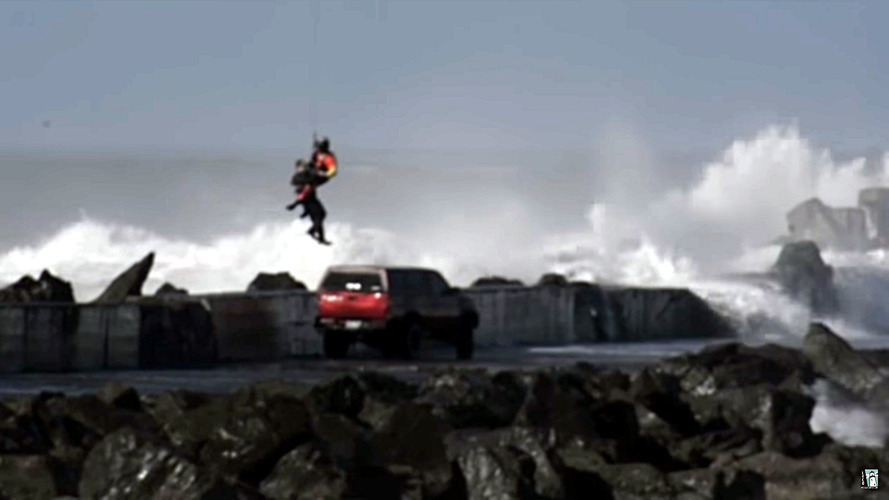 If there’s any explanation for this guy’s odd decision to drive out in pounding waves, it’s that he’s possibly not from the area. The person who shot this video told the The Lost Coast Outpost that the truck had Arkansas license plates. If this was the driver’s first time in these conditions, he might not have realized the danger.

A call 911 alerted the Coast Guard. Initially, rescuers came by boat to try to save the guy, but the huge waves made the situation too dangerous. As shown in the video, a helicopter eventually hoisted the guy away. We wonder if the guy was able to recover his stricken truck or whether the swells pushed it into the ocean. 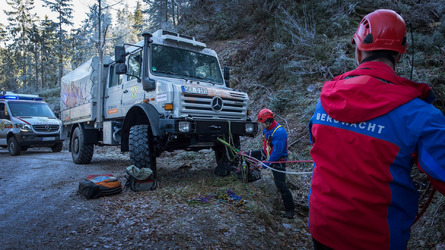 German Skiers Are Safe Thanks To Unimog Rescue Truck 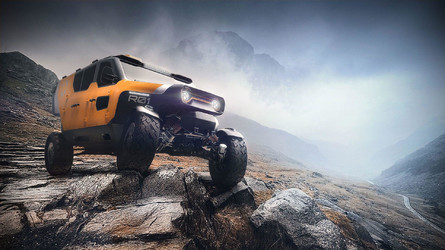