Driving a Turkish-made Fiat around the world 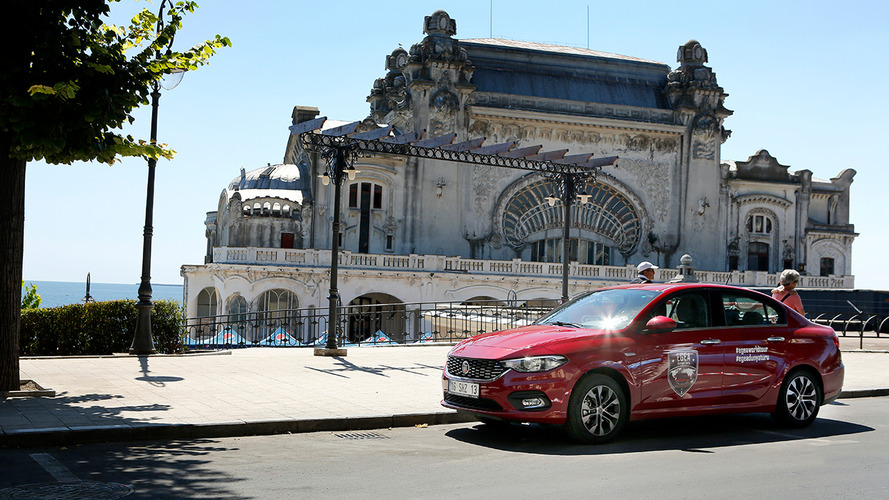 You might not have yet had a chance to encounter the good work being done by our friends at Motor1 Turkey. But when we heard about this dramatic expedition being undertaken by auto journalist Okan Altan, we knew we’d have to translate it. Not everyone is built for a world tour, but Altan gives us a brilliant play by play of the grueling trip, from the comfort of our desk chair. Enjoy.

Veteran automotive journalist and writer, Okan Altan, is one of the most famous in Turkey. His reputation comes in part from his penchant for undertaking extremely long road trips.

The 16-year Auto Best juror has previously driven a Fiat Doblo (a car manufactured in Bursa,Turkey) to Detroit, Michigan, from Turkey. He then followed it up with a “14 countries in 14 days and 10,000 kilometers” test with the then new Hyundai i10.

Now Altan has an even more impressive accolade to his credit: circling the globe in a standard production car. What follows, courtesy of our friends at Motor1 Turkey, is an interview with the intrepid journalist, telling the story of the what may be the first “test drive” made around the world.

Our story has three heroes: Altan, his traveling companion and professional photographer Savas Yilmaz,  and their ride, the Fiat Egea. Known as the Tipo in European markets, and called Dodge Neon in Mexico, the Egea hardly seems like a world beater with its 1.6-liter gas engine, and automatic transmission. Even more impressive, then, that it was selected randomly from the production line for this tremendous trip.

How did the adventure start, Mr Altan?

The world tour has always been my dream. In 2015, at the launch of the first Egea Sedan, I informed the Fiat Brand Director about my plans. He was both surprised and favourable. Immediately following the launch of the Egea Hatchback, Tofaş CEO Cengiz Eroldu said, “The world is our playground” and accepted my proposal.

At the tip of the North Pole you can theoretically take a world tour in two seconds with three steps. There are standards for people claiming a real circumnavigation. National Geographic and World Travelers created the standard. The solstice lines measure about 37,000 km (22,990 miles), so smaller distance doesn’t register as official. It wasn’t set in stone but that’s what we based our tour on.

For the route, I started by looking for roads that would be suitable for an unmodified, front-wheel-drive car. Still, it wouldn’t be easy, with changeable weather conditions, visa periods to account for, and untested paths.

Eventually I had two tough routes in mind. One was Trans Siberia, the other one was Carrera Panamericana track in Mexico. And, as you might expect, my source of inspiration was the famous book of Jules Verne, Around the World in Eighty Days.

North along the Black Sea

The start of our journey out of Turkey followed the coast of the Black Sea northward. On August 13, 2016, we took Turkey's Dereköy border crossing. We reached Varna, Bulgaria by way of Greece, and then to a place rich Europeans have flocked for almost a century to spend their holidays – Constanta, Romania.

There are no gates between Ukraine and Romania, despite the shared 600 km (372 miles) of border between the two. So we were forced to enter by way of Moldova.

When we did enter Ukraine, we felt the coldness of war. There were tanks and soldiers around, and the roads we’d plotted our drive on were not in a good shape. We had to dodge large potholes one after another, and ended up caught by a couple of them, which slowed us down a lot. When we reached Odessa phones were not working and there was no electricity. Then, in Kiev, things got a little bit more normal and eventually we made it to the Russian border.

15 Hours at the border

Visa, insurance, and vehicle registration really slowed us down at the Russian border. All these cost us 15 hours. When we entered the country I thought, there are 11,000 km (683 miles) ahead and Trans Siberia, our visa is good for two weeks. Unfortunately this would mean going fast, sleeping less, and eating quickly. Luckily, everything went well. The Egea was in good condition.

The distance between cities on this Russian stretch, was about 1,000 km (621 miles), with each passing city more like an industrial region. Even with a few small towns in between the big urban areas, we had hours upon hours to listen to ourselves in the loneliness. But while we were getting tired physically, mentally we still felt relaxed.

This is a legendary place for car and motorcycle enthusiasts. People wear epaulettes on their shoulders once they finish the whole route. Average transit times run about six months. You've heard of the Trans-Siberian Express. Tickets cost nearly $6,000 for a train ride from Moscow to Vladivostok. Since we did not have enough time to enjoy the scenery there were times we had to travel at over 110 miles per hour (177 kilometers per hour).

I cannot describe the taste of coffee with the Lake Baykal in the background. You have to look for the winter pictures of this place online. There are fresh water seals living in the lake even with temperatures reaching -58 degrees; it’s frozen for four months.

Summertime is a disaster though. I think the number of mosquitoes per capita is over 50 million. And those creatures are three times larger than the ones we have in Turkey. I had to use a few boxes of fly-suppressing drugs but they didn’t do any good. Fortunately, we kept going our way and did not stop for too long. I drove the car for eleven hours per day, at an average speed of 105 mph (168 kmh), for eight days, without leaving the Siberian forests.

Especially before 2005 there were some very uncomfortable car seats on the market. The world has changed with the notion of ergonomics and comfort; not an insignificant concern at these distances. The Egea scored top marks from me on this discipline.

When we entered Manchuria, the only flagless country in the world, bad things came to mind. China, Russia, Japan, and then Russia again invaded this patch of the world. Along with war, pain, suffering, everyone who came planted their own flag. We met different people here but since we were almost out of time, we had to rush to Vladivostok.

The port city is important in military and commercial sense. But for our journey it’s significance was a marked change in our travel plan. Whilst we were there we decided to go to Japan instead of the U.S. We caught a ship and loaded the car for Japan.

I was told, once reaching Japanese customs with the Fiat, that there had never been a car with Turkish license plates trying to get into Japan. As it turned out, making history would be time consuming. We were caught up in the legislative gap because there was no precedent, and we waited for a report to be written. When and if another Turkish car comes after us, it will take a lot less time to get in.

Traffic in Japan flows from the other side. Our phones and navigation did not work because they are not compatible with the local system. We had two GPS units in the car, and they did not work either. Japanese systems in general seem to be different from anywhere else.

On the positive side, Japan is magnificent, if very expensive. One can expect to cover ten km in an hour in regular traffic. Toll roads are a good idea but you have to pay about ¥1,500 (about $13) for the shortest distance. We had to pay it for just 250 meters. And they don’t accept credit cards. Anyway, we loaded up our Fiat Egea in the port of Yokohama and started our 11,000-km-long (6,835-mile) sea journey. Wait for us Mexico!

The end of a tale

French writer Jules Verne has inspired many scientists with books such as Journey to Center of the Earth, Twenty Thousand Leagues Under the Sea, and From the Earth to the Moon. Our inspiration was Around the World in Eighty Days all along. I Verne could have ever imagined how long the waiting times at the customs have become. We had to wait eleven days in customs to enter Mexico, at which point 80 days became a dream.

American cinema has deceived us very seriously about Mexico. The Mayans chose a nice place to live. Everywhere is covered with tropical forest, green space, and parrots! On the other hand, we couldn’t find any decent roads. Even we we could find them, plentiful speed bumps slowed us down.

We were warned us about fake customs gates; erected with the Mexican flag and Spanish warning signs. They ask for your passport and then they ask for money to give it back. We heard stories of those who paid $5,000 to $10,000.

In the meantime, I met Egea's brother, the Dodge Neon, in Mexico. You know, this vehicle, which is manufactured in Tofaş Bursa plant of the FCA (Fiat Chrysler Automobiles), is sold in this region with the Dodge moniker.

The start of the legendary Carrera Panamericana rally was only a week away when we loaded the Egea for the second sea journey. Maybe another time...

The 11,000-km journey from Japan to Mexico took us 20 days. The 6,000-km (3,728-mile) Atlantic passage took us another 40 days. The ship stopped at every port. The Egea is sold under the name Tipo in England, but hey did not recognize our car in customs. The problem was sold however, when I stuck some “Tipo” badges I’d acquired on the car.

People recognizing the license plates in Europe always asked the same questions; “Are you really coming from Bursa? Have you started in Turkey?” They were really surprised when I told them about the world tour we were trying to complete from the other side of the planet.

When you investigate, you will see that usually, cars trying to do a world tour are either rear-wheel- or four-wheel-drive. A few front-drive cars exist on the list, but took years to complete the journey.

The driving we were forced to do, on less-than-ideal road conditions, did take a toll. With some 4,000 km (2,485 miles) of rough conditions, there were squeaks and rattles that you typically shouldn’t find on a car like this until 100,000 km (6,213 miles) showed on the odometer.

But we only had to service the Fiat once, for oil change. We had two flat tires and that was it. That makes my national pride come out; the Fiat Egea is the child of about 600 engineers working in the best automotive R&D center in Turkey. In short, it seems Turkey now produces a vehicles as durable as some German cars. I can say this using my professional and personal education, and a world of new experience.