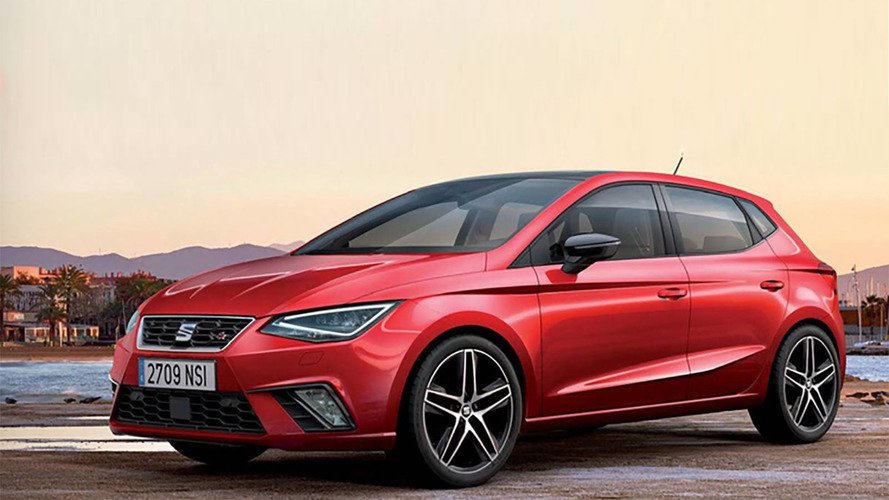 Hours before its official introduction, the fifth-gen Ibiza has leaked onto the World Wide Web showing off its sharp body heavily influenced by the facelifted Leon. While some would have hoped to see a bit more variety coming from SEAT’s design department, others will appreciate the supermini’s Leon-like body with plenty of creases. Bear in mind we’re looking at the FR trim with a double exhaust setup, LED headlights and other niceties, so lesser versions of the new Ibiza won’t look as good as this one.

We also have some preliminary technical details to share of what will be the first model from the Volkswagen Group to utilize the MQB A Zero platform. It will allegedly have a 95-mm longer wheelbase, so expect more legroom for passengers sitting in the back. While the outgoing Ibiza has a cargo capacity of 292 liters with the rear seats in place, its replacement will have 355 liters to offer.

Power will be provided by a turbocharged three-cylinder 1.0 TSI engine offered in 95 and 115 horsepower flavors. Should you want more gasoline punch, the familiar four-cylinder 1.4 TSI will deliver 150 hp and 250 Nm. SEAT will also sell the all-new Ibiza with a thrifty 1.6-liter TDI in three states of tune: 80, 95, and 115 hp. Depending on engine choice, Martorell’s supermini will be offered with five- and six-speed manual gearboxes and a seven-speed DSG.

As far as the interior cabin is concerned, it’s pretty much straightforward, without anything that catches our attention. An eight-inch touchscreen for the infotainment system will be available on upper-spec models, as it’s the case with the FR pictured here. Other goodies inside include a six-speaker sound system and even optional wireless charging.

SEAT will officially unveil the 2017 Ibiza tonight at 6:00 PM GMT, so check back for the whole shebang.