2018 Jeep Wrangler grille surfaces, but is it genuine? 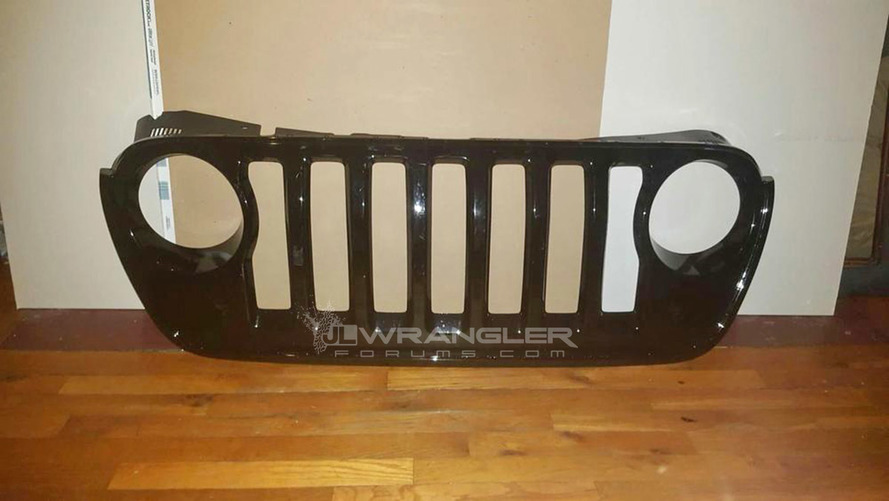 Seems like the 'Jeep' logo and the turn signals have been repositioned.

The folks from JL Wrangler Forums have brought to our attention the attached image sent to them by a tipster saying the photo originates from a sheet metal fabricator. Looking at the seven-slot grille and comparing it with spy images and the latest speculative renders, it appears to be legit. There aren’t any cutouts for the turn signals, so it means these have been built into the front fenders. Also noticeable is the absence of the “Jeep” logo, thus suggesting it will sit on the bottom section of the hood.

There is a difference between the purported genuine grille and the one illustrated in the renders, though. The new image reveals the Wrangler JL’s front grille will have rounded lower corners. As seen in the numerous spy shots we’ve posted, the grille is going to be a tad more curved than on the outgoing JK and it also might be slightly wider.

Expect to see the next-gen Wrangler bow in November at the 2017 Los Angeles Auto Show and enter production the same month in Toledo, Ohio. Jeep has plans to have the new model in its dealerships by early 2018, with the pickup to follow about 12 months later. It’s important to mention the JL’s debut late this year will not spell the end of the current model taking into account a recent report indicates it will remain in production until March 2018 when FCA will shut down the part of the factory in charge of putting together the JK to retool it for the new pickup. That being said, the same peeps from JL Wrangler Forums are suggesting the current Wrangler production will not be terminated until June 2018.

A considerable number of rumors have surfaced the web; some indicating the new Jeep Wrangler will have aluminum doors and hood, while other reports are suggesting it’s going to boast a three-piece removable roof. Underneath the hood it will have a wider array of powertrains, including an updated version of the V6, a turbocharged four-cylinder, and a diesel. Later in its life cycle, the new Wrangler might also get mild hybrid and hybrid electric derivatives.

Seeing as how the JL is probably pinned for a November public debut, let’s just hope Jeep will be kind enough to unveil the next-gen Wrangler in October or even earlier.