The deal should make the companies' fuel cells less expensive by improving the economies of scale for them.

Honda has been on the forefront among automakers developing hydrogen fuel cell technology, and the company and General Motors have now announced a partnership for taking those innovations even further. The firms will invest a total of $85 million to create a joint venture that will manufacture fuel cells in Michigan, and the parts will go into future vehicles from both businesses.

Fuel Cell System Manufacturing, LLC (FCSM) doesn’t have the most creative name, but it has big goals. The joint venture business will set up shop at GM’s battery plant in Brownstown, Michigan, and it’ll begin building fuel cell stacks in 2020. The automakers estimate the new company will employ around 100 people.

“The combination of two leaders in fuel cell innovation is an exciting development in bringing fuel cells closer to the mainstream of propulsion applications,” GM Product Development boss Mark Reuss said when announcing the joint venture. “The eventual deployment of this technology in passenger vehicles will create more differentiated and environmentally friendly transportation options for consumers.”

GM and Honda hope this joint venture can bring down the cost of hydrogen fuel cell powerplants by creating greater economies of scale. Each automaker will appoint three executives to be on the board of FCSM, and they’ll appoint an alternating chairperson and president from each firm. 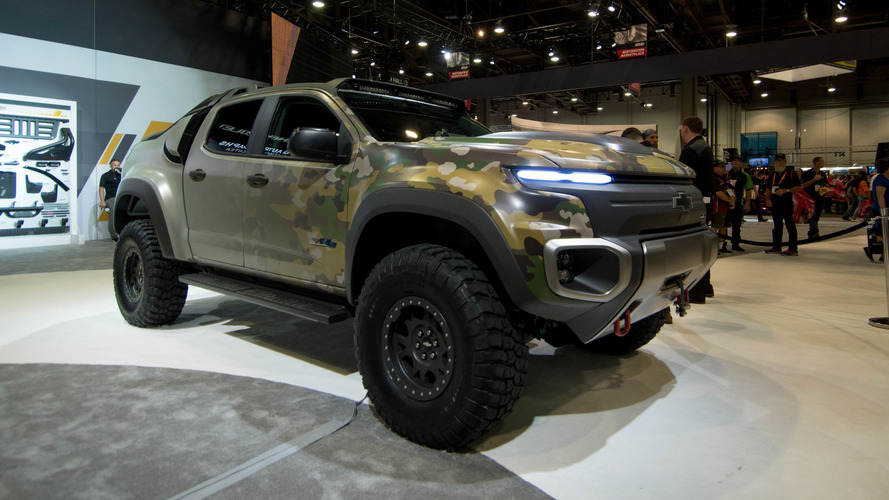 The two automakers have been partnering on fuel cell development since an agreement in 2013. Honda has been quicker to bring the green technology to market, though. The Japanese automaker launched the hydrogen-fueled FCX in 2002 and followed it with the FCX Clarity in 2008. The new Clarity just went on sale in the United States.

GM has been experimenting on hydrogen fuel cells with the U.S. military. For example, the General created an FCEV deep-sea drone for evaluation by the Navy, it also developed a hydrogen-fueled Chevrolet Colorado pickup (above) for testing by the Army. GM had indicated that a fuel cell vehicle for consumers should arrive around 2020.

“Over the past three years, engineers from Honda and GM have been working as one team with each company providing know-how from its unique expertise to create a compact and low-cost next-generation fuel cell system,” said Toshiaki Mikoshiba, chief operating officer of the North American Region for Honda Motor Co., Ltd. and president of Honda North America, Inc. “This foundation of outstanding teamwork will now take us to the stage of joint mass production of a fuel cell system that will help each company create new value for our customers in fuel cell vehicles of the future.”

The Fuel Cell System Manufacturing (FCSM) joint venture will be operated by a board of directors consisting of three executives from each company that will include a rotating chairperson. In addition, a president will be appointed to rotate between each company.

GM and Honda are acknowledged leaders in fuel cell technology with more than 2,220 patents between them, according to the Clean Energy Patent Growth Index. GM and Honda rank No. 1 and No. 3, respectively, in total fuel cell patents filed in 2002 through 2015.

Fuel cell technology addresses many of the major challenges facing automobiles today: petroleum dependency, emissions, efficiency, range and refueling times. Fuel cell vehicles can operate on hydrogen made from renewable sources such as wind and biomass. Water vapor is the only emission from fuel cell vehicles.

In addition to advancing the performance of the fuel cell system, GM and Honda are working together to reduce the cost of development and manufacturing through economies of scale and common sourcing. The two companies also continue to work with governments and other stakeholders to further advance the refueling infrastructure that is critical for the long-term viability and consumer acceptance of fuel cell vehicles.

GM is currently demonstrating the capability of fuel cells across a range of land, sea and air applications. The company has accumulated millions of miles of real-world driving in fuel cell vehicles.

“With the next-generation fuel cell system, GM and Honda are making a dramatic step toward lower cost, higher-volume fuel cell systems. Precious metals have been reduced dramatically and a fully cross-functional team is developing advanced manufacturing processes simultaneously with advances in the design,” said Charlie Freese, GM executive director of Global Fuel Cell Business. “The result is a lower-cost system that is a fraction of the size and mass.”

Honda began delivery of its all-new Clarity Fuel Cell vehicle to U.S. customers in December 2016 following a spring 2016 launch in Japan. The Clarity Fuel Cell received the best driving range rating from the EPA of any electric vehicle without a combustion engine with a range rating of 366 miles and fuel economy rating of 68 miles per gallon of gasoline-equivalent combined.

“The expertise Honda has established that led to creation of the first-generation Clarity fuel cell system is valuable experience that we are leveraging in the joint development of the next-generation fuel cell system with GM,” said Takashi Sekiguchi, managing officer and director and chief operating officer of Automotive Operations, Honda Motor Co., Ltd. “Our collaboration is an opportunity to further utilize the strengths of each company to popularize fuel cell vehicles at the earliest possible time.”

GM and Honda collaborated in a powertrain cross-supply arrangement in 1999 under which Honda manufactured 50,000 V-6 engines for the Saturn VUE and Honda received diesel engines from GM’s Isuzu affiliate for use in Europe.

General Motors Co. (NYSE:GM, TSX: GMM) and its partners produce vehicles in 30 countries, and the company has leadership positions in the world's largest and fastest-growing automotive markets.  GM, its subsidiaries and joint venture entities sell vehicles under the Chevrolet, Cadillac, Baojun, Buick, GMC, Holden, Isuzu, Jiefang, Opel, Vauxhall and Wuling brands. More information on the company and its subsidiaries, including OnStar, a global leader in vehicle safety, security and information services, can be found at http://www.gm.com