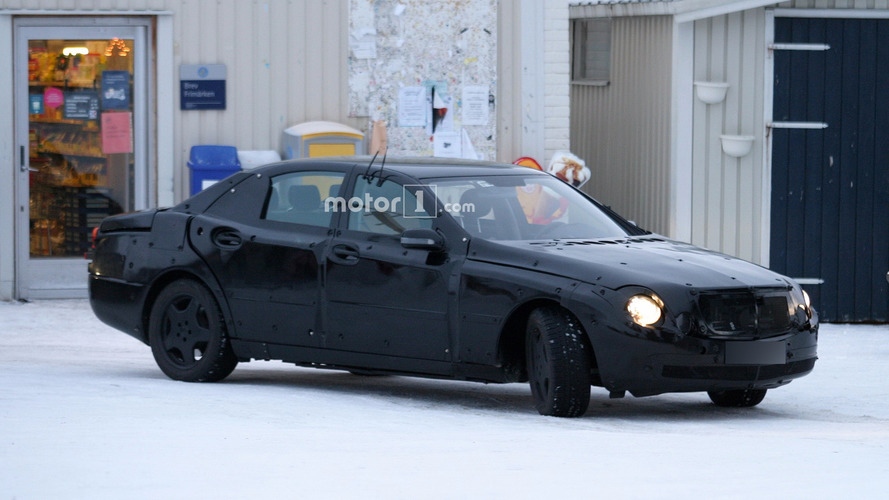 This large sedan was spotted way back in the 1990s.

[Update] And the answer is... Mercedes-Benz S-Class W220. The British automobile designer mentioned in the article is Steve Mattin, while the new engines for the upcoming S-Class facelift are inline-six gasoline and diesel units.

After last week’s big SUV, which turned out to be a first-generation Volkswagen Touareg, this time around we are dealing with a big sedan spotted trying to mask its true identity underneath body-colored fake panels. While the Touareg was caught stretching at the famous Nürburgring circuit in Germany, this one appears to be from somewhere in the Nordic countries while conducting cold-weather testing.

Just to give you an idea about when the spy photo was taken, the production version of this heavily disguised left-hand-drive prototype was launched several years before the Touareg. The model is still in production today, but it has changed a couple of generations since then. The current one is about to receive a mid-cycle facelift later this year set to bring a couple of new engines with a different cylinder configuration than what the company is offering these days.

To give you one more hint that should make it easier to solve the spy photo riddle, the large sedan was styled by a British automobile designer and his first sketch was ready towards the end of 1992. Compared to the model before it, the new generation was actually slightly smaller, but even so it provided more space inside the cabin thanks to the optimized packaging.

As it was the case with the Touareg last week, we will update the article with the answer to the spy photo puzzle tomorrow. We invite you to give us your guesses about the make and model in the comments section below.

We are going to post Car Spy Photo Trivia on a weekly basis on our media channels as well, so you can follow us on Facebook and Twitter and give us your guesses there.

You can check out the first-gen VW Touareg from last week in the gallery below.