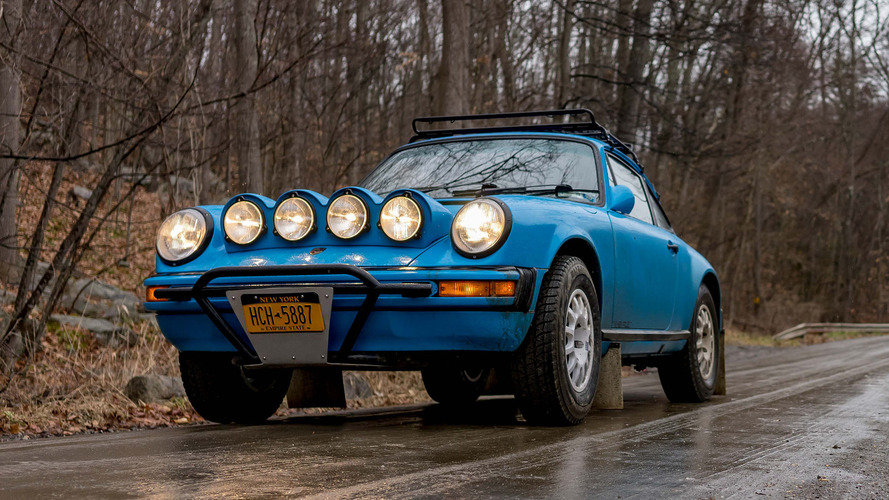 Recreating the mountain bike of Porsche 911s in gorgeous detail.

Pro racer Leh Keen has taken his passion for Porsche down a dirty, muddy, and very good path with The Keen Project. Essentially recreating the aesthetic of Porsche’s infamous 1984 Dakar-winning 953 911, Keen’s creations don’t just look the part, they play it, too.

On a rainy Monday afternoon in the Lower Hudson Valley, New York, we met with Michael Pollock, proud owner of The Keen Project Safari #4. Michael plans to use the Safari as his inclement-weather wheels while his fair-weather ride, a lightly modified 1991 911 Carrera 4, awaits in a climate-controlled garage. Michael favors the analogy of a road bicycle to a mountain bike, but you get the idea.

Keen’s creations don’t just look the part, they play it, too.

Motor1: Have you always been a Porsche guy?

Michael Pollock: No, actually, for the longest time I was a BMW guy, and in the late ‘80s I sold Ferraris and BMWs for five years. But even though I was selling Ferraris, I knew that if you wanted a sports car that you could actually use every day, that’s a Porsche.

Yes, September 2015 I bought a 1991 Porsche 911 [964] C4. I had some help from a friend and a group of guys known as DBFD, Drive Break Fix Drive Motorsports, fixing up my car and others. We overhauled I think it was five cars’ suspensions last year. All the bushings, the works; in some cases we replaced the entire suspension.

And that’s work you were doing yourself with the help of friends?

We were doing it with our ring-leader Rob Goughary. Some of the guys have had him do the work for them, but in my case I was able to do most of the work with him, and I worked on a couple other guys’ cars as well.

Leh makes the lightpod himself, but the front bumper guards and skid-plate are pieces he has made with a fabricator near Atlanta.

So how did you find out about The Keen Project?

I saw a story on Leh through PCA [Porsche Club of America], but what got me was my friend Dave Minchin sent me a link to an article on a popular Porsche blog and it was the first article I’d seen about the build, and had some details of how it worked. When that article was written, Safari #3 was just being started, so I gave Leh a call and we started looking for a donor car.

How involved were you with the customization and build of Safari #4?

Throughout this build Leh was having as much fun as I was. Once I narrowed the colors down, Leh provided renderings of my final choices, which helped me settle on Riviera Blue. I was involved in picking the interior fabric, but we left the brown leather trim from the donor car. Since I wanted the roof rack and the spare tire on the Safari, I sent an idea to him, and Leh and his fabricator came up with the removable rear section for the replica Porsche roof rack, which they did an amazing job on.

I don’t want to say anything is non-negotiable but there are things Leh likes to see in the cars, like the way the big mud flaps are mounted into the body.

How much influence does Leh have on the final build of each car?

There are certain aspects of these cars that are Leh’s trademarks. I don’t want to say anything is non-negotiable but there are things he likes to see in the cars, like the way the big mud flaps are mounted into the body. Leh likes the GTS Classics Vallelunga seats, but Safari #3 didn’t have those. For example, the Momo Prototipo steering wheel, he likes the cars to have a bit of a ‘not modern’ vibe. Leh makes the lightpod himself, but the front bumper guards and skid-plate are pieces he has made with a fabricator near Atlanta.

Leh’s got a great network of partners that do the work. Goldcrest Motorsports is a Porsche shop down in Georgia that does a lot of the mechanical work. A guy named Bryson at Classic Livery of Atlanta does all the body work. It’s a great deal because with Leh’s regular partnerships with these guys, they give him great prices, which are then passed along to the customer. Leh just gets a flat fee for organizing the build, so it really works out well for everybody.

It was a blast. In my case I flew down to Georgia, Leh picked me up at my hotel, and we went back to his shop where the car was in a corner by itself under some spotlights with all the rest of the lights off. There’s a picture of it in Leh’s Instagram and mine. It was a very cool way to get a new car. And when we were done I got a chance to see Leh’s other cars, like his early 2000s Subaru rally car that he just acquired and his personal Safari. I also got to see the donor car for Safari #5.

You drove the Safari home from Atlanta to New York, right? What was it like at 80 miles per hour on the highway?

I actually got to experience driving the Safari at 85 mph in pouring rain on the highway and it was incredibly comfortable and incredibly stable. With the exception of the volume level, you could drive that car all day long. And I did, I drove a solid ten hours. I did manage to find dirt at some point every day along the way. I actually drove the car from pick-up in Atlanta down to Savannah to play in the dirt with a guy named Jim Goodlett who has a real rally 911, so within four hours of picking up my Safari I was sliding around on dirt.

What are the main differences between your 1991 964 C4 and the Safari?

In a word, everything. The Safari is lifted, while the 964 has been lowered from the original U.S. ride height, which was kinda high. There’s a little bit of boosted steering in the 964, and there’s no boosted steering in the Safari. I happen to have deleted the radio and air conditioning in my Safari, although I think one Safari has both of those items. I specifically like my 964 a little on the loud side, but it feels like a Lexus in comparison to the Safari. And I have a muffler delete of one of the two mufflers on my 964, so it’s not necessarily a quiet car. I joke that the Safari is the lovechild of my 964 and my son’s 1983 Land Rover 110.

Have you encountered any terrain that the Safari can’t handle?

Yeah, I think so. I was out last week exploring north of me up in Dutchess and Putnam Counties, New York, and I came upon a seasonal road that said “not maintained between November 15th and April,” so of course I started down it. I got to a point where it was about three or four inches of ice over the rocky dirt surface and decided that discretion was the better part of valor, and turned around. The laws of physics still apply, no matter how capable the car is.

The laws of physics still apply, no matter how capable the car is.

Which leads me to my next question, have you thought about mounting studded tires?

Not seriously. If I lived on a lake that froze, I’d have had a set of studded tires before I picked up the car. Since I don’t, they would be a very limited use item. So I haven’t really seriously given it any consideration. It’s not in the cards for this winter.

Is there anything you wish you could change about the Safari build in its current form?

Not really. I did opt for the roll-bar with a horizontal bar behind the seat in case I wanted to put a harness in at some point. I didn’t really think about how much that would get in the way of throwing things into the back of the car, like your gym bag or any bag. It makes the space behind the seats quite a bit harder to use, especially with the shape of the seats that are in the car. They have wings up at shoulder level that project out, which really makes it hard to put anything in the back. I’m not sure I’ll ever have a five-point harness in the car so I probably would have done that differently. My friend is trying to convince me to put a winch on the car, which might be helpful if you get stuck in ice, but I don’t feel a real need for that now.

Any final words about The Keen Project experience so far?

It was really enjoyable working with Leh. I had a chance to meet him over the summer when his race team came to Lime Rock Park, as well as Bob Sanderson from Goldcrest motorsports. It is interactive and it is a collaboration. It was just loads of fun.

Keep up with Michael and his Safari on Instagram and WheelWell.com.