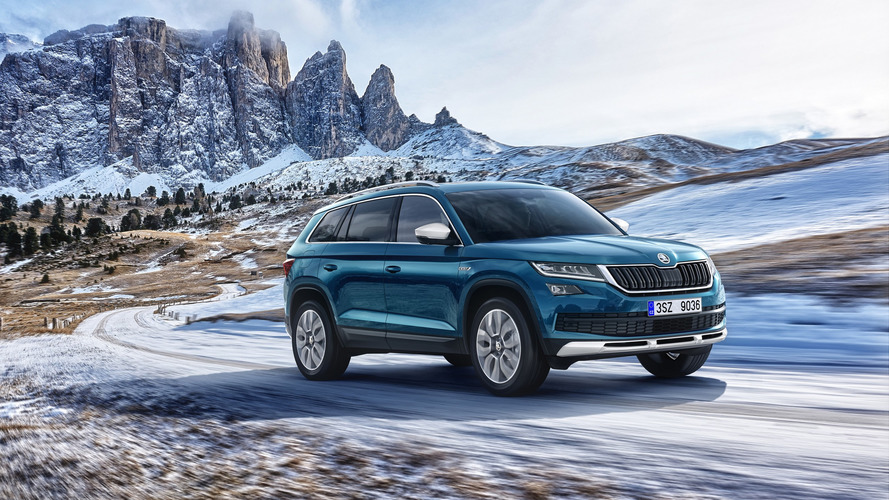 The 'Skodiaq' gains a more competent off-road derivative with an increased ground clearance.

The ideal candidate in Skoda’s range to receive the Scout treatment is without any doubt the large Kodiaq SUV and thankfully the VW-owned marque is ready to launch it. Much like the Octavia Scout, the new member in the Kodiaq family comes as standard with an all-wheel-drive setup and also benefits from an increased ground clearance to better tackle the off road.

You’ll be able to tell it apart from the other Kodiaq models by its silver front and rear underbody protection and the standard 19-inch alloy wheels exclusive to this version. Rounding off the changes on the outside is the addition of a small “Scout” badge located on the front fenders. There’s another one inside the cabin on the glove compartment to serve as a reminder you’re driving the more rugged version.

Starting off as a Kodiaq in the mid-range Ambition trim, the Scout adds Off-Road Assist and the Driving Mode Select system giving drivers the possibility to choose from: Eco, Comfort, Normal, Sport, Individual, and Snow. Depending on selected mode, the settings of the engine, power steering, automatic transmission, and even air conditioning will all change.

Skoda is being quite generous with the standard equipment as all Kodiaq Scout models get ten-color LED ambient lighting, Alcantara upholstery, steel pedals, textile floor mats, and an infotainment system with eight speakers.

Regardless of engine, all Kodiaq Scout models get AWD with an electronically controlled multi-plate clutch installed in front of the rear differential. With a generous ground clearance of 194 mm, the SUV should prove to be competent on bumpy roads. You won’t have to worry too much about damaging the underside of the Kodiaq since the Scout is fitted with a Rough-Road package featuring extra protection for the underbody, engine, brake and fuel lines as well as cables.

Skoda will have the Kodiaq Scout (and SportLine) on display in March at the 2017 Geneva Motor Show where “numerous other novelties” will also be there. Perhaps the Rapid and/or Citigo facelift?

The SUV’s range will be further extended by the addition of a performance RS version already confirmed by the company’s R&D boss.

Mladá Boleslav, 26 January 2017 – ŠKODA continues its campaign in the SUV segment. With the ŠKODA KODIAQ SCOUT, the Czech car manufacturer will present a model variant at the Geneva International Motor Show (7 to 19 March 2017) that exerts its off-road capabilities both visually and in terms of technology. The rugged and robust appearance is accentuated by silver-coloured design details including distinctive underbody protection at the front and rear. The 19-inch alloy wheels specially created for the ŠKODA KODIAQ SCOUT also contribute to its powerful appearance. A choice of two petrol and two diesel engines is available for the new model variant, which comes with all-wheel drive in all versions.

With a length of 4.70 m, up to seven seats as well as the largest interior and boot within its class, the ŠKODA KODIAQ has celebrated a debut that has attracted a lot of attention. The design reflects the brand’s design identity and represents a good combination of emotiveness and rationality. The ŠKODA KODIAQ SCOUT model variant clearly underlines robustness and strength with its distinct design features.

Design – silver as a reflection of its powerful character
Besides the underbody protection, the ŠKODA KODIAQ SCOUT is recognisable from the outside by the tinted rear window and rear side windows (SunSet), which protect from the glare of the sun. Aside from this, silver-coloured details create the robust impression and highlight the powerful character of the Czech manufacturer’s new large SUV.

The radiator grille is framed by a silver-coloured trim. The roof rails, housing of the wing mirror, the side window trims as well as the front and rear underbody protection, which is positioned beneath the bumpers and visually split into three parts, are also silver in colour.

The side view of each of the ŠKODA KODIAQ models is characterised by short overhangs, their sloping roofline that is visually extended by a line in the D-pillar, and the tapered rear. The ŠKODA KODIAQ SCOUT is also fitted as standard with 19-inch alloy wheels specially created for this model variant. Furthermore, it bears a small badge with the model designation on the front wing and the glove compartment.

Equipment
The equipment and interior design are also tailored to the robust character. They are based on the Ambition trim level. The ŠKODA KODIAQ SCOUT comes with Off-Road Assist, a Rough-Road package with underbody and engine protection as well as a front and rear Park Assist. The generous array of standard equipment includes Driving Mode Select (Eco, Comfort, Normal, Sport, Individual, Snow), which can be used to control the engine, automatic transmission, power steering and air conditioning. Snow mode adjusts the ABS, ASR, ACC (where present) systems and the engine management to the specific conditions of the snow-covered or slippery road.

Range of engines
There is a choice of two petrol and diesel engines:

All-wheel drive
The centrepiece of the all-wheel drive is an electronically controlled multi-plate clutch that is located directly in front of the rear differential, i.e. at the end of the drive shaft, for optimal distribution of the load on the axles. The all-wheel-drive system works quickly and intelligently, its control unit constantly calculates the ideal driving torque for the rear axle. Loss of traction is virtually eliminated due to a control system that is dependent on driving status. In normal driving conditions, especially with a light load and when coasting, the multi-plate clutch transfers the engine power in a fuel-economical way mainly to the front wheels.

Off-road capabilities
The ŠKODA KODIAQ also feels at home on off-road terrain. With a ground clearance of 194 mm, it can even negotiate larger bumps with ease. It has a ramp angle of 19.7 degrees; the approach and departure angles are an impressive 22.0 and 23.1 degrees due to the short overhangs. In addition, the Rough-Road package, which comes as standard, protects against damage to the underbody, engine, brake and fuel lines as well as cables. When the road ends, the driver can select off-road mode simply by pressing a button. The optional DCC shock absorbers change their mode of operation accordingly; the throttle response is somewhat slower. The ABS anti-lock braking system permits a certain amount of slip in order to create a wedge effect in front of the wheels. In order to improve traction in off-road mode, ASR allows a greater amount of slip, and electronic differential lock (EDL) reacts more quickly. When required, the Hill-Hold Control and Hill-Descent Control functions are activated – the latter maintains the car’s speed at the level at which the driver enters the slope.

Driver assistance systems
With their wide range of driver assistance systems, all variants of the ŠKODA KODIAQ set benchmarks within their segment. New functions include Trailer Assist, Blind Spot Detect, which warns of any vehicles in the blind spot, and Rear Traffic Alert, which monitors traffic coming from the sides and behind when manoeuvring etc. The Crew Protect Assist function, which closes windows and the sunroof in the event of an impending accident and tensions the seat belts of the front seats, works in conjunction with the improved Front Assist function, which includes the City Emergency Brake and predictive Pedestrian Protection functions. Park Assist’s functions have been further perfected. The Area-View system is also a first for the brand: the surround-view cameras, which are located in the front and rear sections as well as in the wing mirrors, come with wide-angle lenses and allow views of the area immediately surrounding the vehicle to be displayed on the monitor. These include a virtual top-down view and 180-degree images from the areas to the front and rear. This makes it easier to drive in confusing situations or on rough terrain.

Infotainment and ŠKODA Connect
The ŠKODA KODIAQ SCOUT is equipped with all the modern infotainment systems of the new large SUV. The capacitive touch displays feature a glass design (except for the standard Swing sound system). The top-of-the-range version, the Columbus navigation system, has a 9.2-inch monitor, a Wi-Fi hotspot and an LTE module. The automatic Emergency Call function comes as standard. The mobile online services from ŠKODA Connect are the perfect addition for the state-of-the-art infotainment system. They set new benchmarks in terms of navigation, information, entertainment and assistance, and can even be configured using your home computer or via the app.

World premiere at the Geneva Motor Show
The ŠKODA KODIAQ SCOUT will make its debut at the 2017 Geneva International Motor Show. The world-renowned motor show is open to the public from 9th to 19th March 2017. ŠKODA will present the new model variant of the large SUV and numerous other novelties in hall 2 on the first floor of the Palexpo Exhibition Centre.