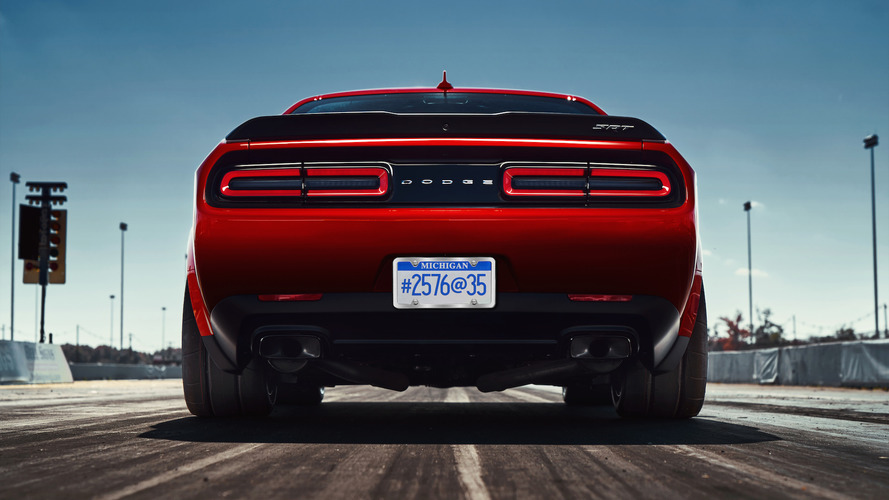 Just when you thought the Challenger couldn’t get any more aggressive looking.

Wider is better if you ask the engineers over at Dodge. Continuing the teasing campaign leading up to the reveal of the upcoming Dodge Challenger Demon, the company has released its third video entitled simply "Body," along with a lone photo that gives us our first real look at the car.

Similar to spy shots we saw back in October, the Demon wears a pair of massively flared fenders in the rear, and a new set of rubber. "Demon Branded" 18 x 11-inch 315/40R18 Nitto NT05R drag radials have been added to both the front and the rear. It’s the first ever factory production car with drag radials standard. The latest teaser video highlights that wider body and those race ready tires more in depth.

As far as details go, there aren't many. But we do know that the Demon will be the "new ultimate performance halo" of the brand, besting even the 707-horsepower (527-kilowatt) Challenger Hellcat. It will be lighter, too, by about 200 pounds (91 kilograms), signifying about a five percent reduction over the standard manual Challenger. Though details remain murky, the company says new suspension, braking, wheel, and interior components are to thank for that pretty significant weight loss.

Official performance figures won’t be released until the Demon makes its debut at the New York Auto Show in April, sadly. Until then, we'll have to manage with a few vague teaser videos – like this one – as well as a potentially leaked look courtesy of Vin Diesel and the Fast and Furious crew.

We'll know more details closer to the car's unveiling. The New York Auto Show opens its doors to the press on April 12, 2017.