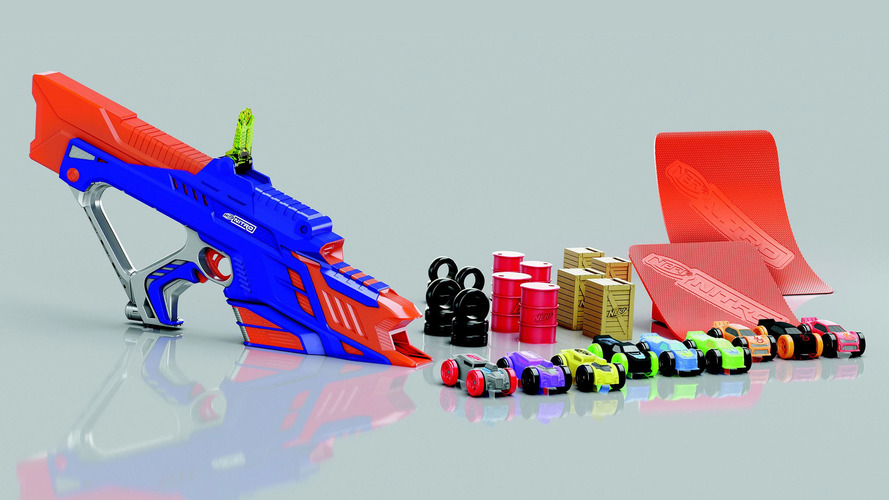 The latest weapon from Nerf lets us fulfill a dream only previously by modding the Grand Theft Auto games: owning a gun that shoots out cars. That’s right, the Nerf Nitro lets you load toy vehicles into it and blast them onto a stunt course.

In usual Nerf fashion, the vehicles are foam, so don’t worry about your kid launching diecast cars like Hot Wheels at each other’s heads. According to Hasbro, there are 48 vehicle designs at launch. They’ll be available in seven sets like the 24-piece Motofury Rapid Rally and Duelfury Demoltion, which comes with two launchers.

Players can set up an obstacle course with tires, barrels, and boxes that come with the sets. They then load the car into the blaster, look down the sights, and pull the trigger. There are even ramps, and we hope the gun is powerful enough to let the little vehicles get plenty airtime. Using two guns, kids could set up stunts where the two cars crash into each other. Even as adults the concept of this toy sounds amazing, so we expect children would love it, too.

Nerf maker Hasbro conducted two years of research and found “demand for an original, high-performance stunt car alternative.” We hope the person who came up the idea of taking Nerf’s normal foam blasters and loading them with cars got a little extra in his or her bonus for the year because the idea is fantastic.

Hasbro tells Motor1 that Nerf Nitro goes on sale this summer. Prices for the sets vary between $9.99 and $49.99.

Car-loving kids today have some fantastic toys available to them. For example, Lego's Speed Champions line are affordable, easy to build, and are great representations of real vehicles.

PAWTUCKET, R.I.--(BUSINESS WIRE)--Building on more than 45 years of innovative play experiences designed to excite and thrill fans, the NERF brand from Hasbro, Inc. (NASDAQ: HAS) introduces NERF NITRO, a unique line of blasters and launchable foam vehicles. Hitting shelves globally in 2017 with distinctive designs and stimulating play experiences based on two years of research focused on both NERF and vehicle fans, the performance-based NERF NITRO line is racing on to the vehicle scene as only the NERF brand can, bringing with it the thrill of speed, jumps, tricks, and adrenaline-fueled action.

“The imaginative, fun NITRO line is an exciting development as we continue to drive innovation and explore diverse worlds of play for the NERF brand and our fans of all ages,” says Michael Ritchie, VP, Global Brand Marketing, NERF Franchise. “Building on the action-packed adventures of blaster play allows us to infuse the stunt car segment with all the dependability, power and thrills that kids and fans expect from the NERF brand.”

Design, power, performance, and heritage set the NERF brand apart. With years of innovation and insight, the NERF team of designers are unparalleled experts in the world of blasting toys. Drawing from this knowledge and delivering on years of research identifying consumers’ demand for an original, high-performance stunt car alternative, NERF NITRO sets combine the time-tested blasting power and foam action play of NERF with the exhilarating, high-flying world of stunt car play to create an incomparable play experience. Kids simply load one of the NERF NITRO foam vehicles into the NERF NITRO launchers and pull the trigger to blast the vehicle into overdrive. With customizable, indoor-safe stunt vehicles and accessories, vehicle fans can now create amazing stunt shows almost anywhere.

“NITRO offers kids an original way to play with NERF, combining its expertise as the premiere blaster brand with toy vehicle to create an entirely new way to have fun,” said Jim Silver, CEO/editor-in-chief, TTPM.com. “From the blaster action to the cool stunts and tricks, this new NERF experience is sure to be a hit with fans.”

The colorful, collectible line is designed for kids ages five and up, features more than 48 vehicles designs at launch, and includes sets ranging from the 24-piece MOTOFURY RAPID RALLY set, to the two launcher DUELFURY DEMOLITION set, creating trackless stunt possibilities as boundless as kids’ imaginations. When it comes to high-flying car stunts and tricks, This is How We Play, NERF NITRO style.

About Hasbro
Hasbro (NASDAQ: HAS) is a global play and entertainment company committed to Creating the World's Best Play Experiences. From toys and games to television, movies, digital gaming and consumer products, Hasbro offers a variety of ways for audiences to experience its iconic brands, including NERF, MY LITTLE PONY, TRANSFORMERS, PLAY-DOH, MONOPOLY, LITTLEST PET SHOP and MAGIC: THE GATHERING, as well as premier partner brands. The Company's Hasbro Studios and its film label, Allspark Pictures, are building its brands globally through great storytelling and content on all screens. Through its commitment to corporate social responsibility and philanthropy, Hasbro is helping to make the world a better place for children and their families. Learn more at www.hasbro.com, and follow us on Twitter (@Hasbro & @HasbroNews) and Instagram (@Hasbro).

Launch your cars to the sky with the motorized NERF NITRO MOTOFURY RAPID RALLY set. Load the car into the clip, align the high-jump ramp and pull the trigger to let it fly! Set up and customize the obstacles included to achieve epic stunt status and challenge friends! Includes one blaster, one high-jump ramp, one long-jump ramp, nine NERF NITRO foam cars, and twelve obstacles. Available at most major retailers nationwide and HasbroToyShop.com.

Get ready for head to head NERF NITRO competition with the NERF NITRO DUELFURY DEMOLITION set! Grab a friend, build the stunt challenge, and see whose NERF NITRO vehicle will come out on top. Rearrange the obstacles each time for a new challenge! Includes two blasters, two long-jump ramps, two rings of fire, four NERF NITRO foam cars, and eight obstacles. Available at most major retailers nationwide and HasbroToyShip.com.