The track that makes the massive outline measures over 9 miles.

Nissan is celebrating India’s 68th Republic Day in a big way. The company unleashed a GT-R of the surface of the dry Sambhar Lake in Rajasthan and created the largest-ever outline of a country. Nissan even made a video showing off the massive scale of this record-setting stunt.

The Sambhar Lake was a perfect surface for creating the map because of the soft surface. Plus, the landscape offered a beautiful backdrop for the film. A vast amount of space was also necessary to draw this outline, and once the GT-R was done creating the outline, the length around the exterior measured an astounding 9.1 miles (14.7 kilometers). 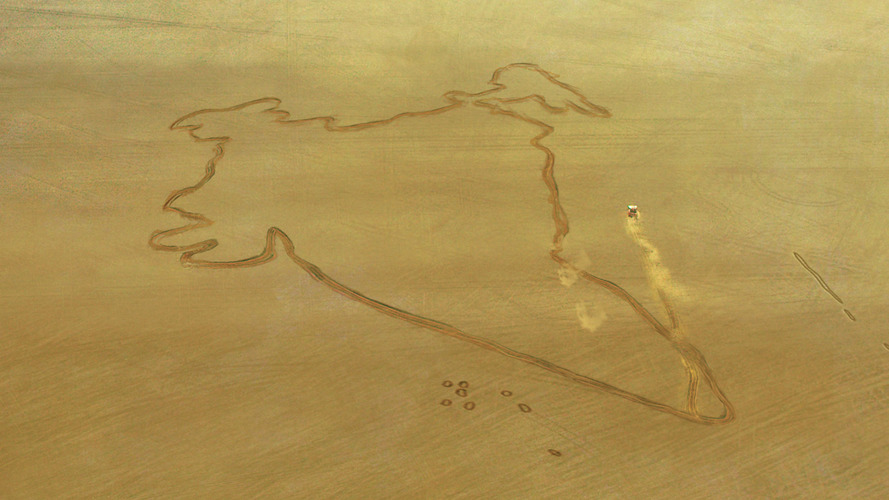 Professional rally driver Rahul Kanthraj was behind the wheel of the GT-R during the run. He followed specific coordinates from a GPS device to make sure he created an accurate outline of India. Kanthraj also did multiple laps so that image was more visible. The video makes this look like a very fun day on the job.

According to Nissan, officials from the Limca Book of Records – an Indian equivalent to the Guinness Book of World Records – were on hand to certify that this was really largest country outline ever. The stunt will be in the 2018 edition of the book next year.

A GT-R previously set a record for the world’s fastest drift when one slid at 189.49 miles per hour (304.96 kilometers per hour) at Fujairah International Airport in the United Arab Emirates. The tuning firm Greddy worked with Nissan on the attempt and pushed the coupe’s already powerful engine to 1,380-horsepower (1,105 kilowatts).

Nissan just refreshed the GT-R for the 2017 model year. Aerodynamic updates let the coupe slip through the air better. Updates to the biturbo 3.8-liter V6 pushed the output to 565 hp (421 kW) and 467 pound-feet (633 Newton-meters). Inside, the company revised the center stack and reduced the number of switches.

To watch the video of this tribute to India on its 68th Republic Day celebrations, go to www.youtube.com/watch?v=2AqKcVgZUIA. #legendarysalute #OMGTR

NEW DELHI, India (25 January, 2017)— Nissan Motor India is celebrating the 68th year of the Republic with a record-breaking tribute to India and its people starring the legendary Nissan GT-R sports car. The company is set to enter the Limca Book of Records – the Indian equivalent of Guinness Book of World Records - for the world’s largest-ever outline of a country map. This was achieved by a  Nissan GT-R which carved out the approximate map of India spanning three sq. km. on the dry surface of Sambhar Lake in Rajasthan. This latest feat of the GT-R, captured in a video released today, salutes the Indian Republic.

Speed and precision were critical to accomplish this incredible act which marks the arrival of the iconic Nissan GT-R supercar in India. Nissan chose Sambhar Lake in Rajasthan as the location for the record attempt for its level and dry lakebed surface, stunning vistas, and soil which is soft enough to leave a deep impression to be captured by camera drones high above.

The Nissan GT-R’s precise and crisp responses enabled the car to manoeuvre through the twists and turns to trace the complex proportions of India’s landmass on the sandy surface in a dry section of the lake.

With major turns and bends along the periphery, the GT-R’s renowned driving performance, power and handling was put to its ultimate test. At the helm of the vibrant red GT-R was professional rally driver Rahul Kanthraj, who piloted the car to achieve the  record.

To ensure accuracy, the map was created by plotting the co-ordinates on a GPS device and multiple laps were done to approximate the actual map. The exciting results were captured on video with drones and onboard cameras.

The dimensions of the map were about 3km in length and 2.8km in width with a total outline periphery of 14.7km. Officials from the Limca Book of Records were on site to validate the process. Once certified, this unique record will be included in the 2018 edition of the book expected to be published in June 2018. The Limca Book of Records is a compilation of records that is published annually in India documenting human and natural world records. It is published annually in three languages: English, Hindi and Malayalam.

As a mark of respect and appreciation for India and Nissan customers on Republic Day, the company has issued a video that showcases the legendary GT-R as it sets the new  record.