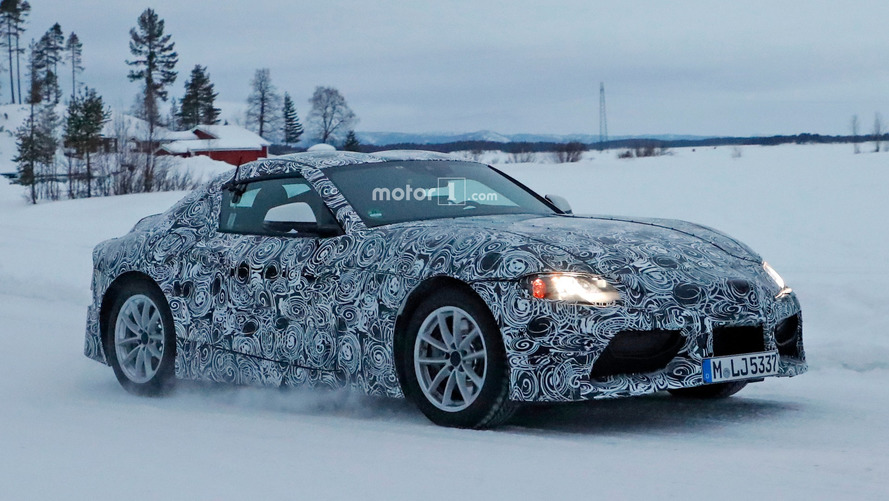 No all-wheel drive? No problem.

You think a little snow can stop the upcoming Toyota Supra (or whatever it will be called)? Think again. The latest prototype was caught tearing up some snowy roads in Germany, testing out its winter skills.

Like most photos before it, this latest set of spy shots don't show much. The front fascia is still far from production ready, but features two large side air vents flanked by a smaller central vent. The nose is more prominent too.

The rear, meanwhile, does show off a few more angles. The taillights look like they were ripped right off a last-gen A80, while a new spoiler and a set of dual exhaust tips are also noticeable. It remains to be seen how many of these features will actually carry over from concept to production.

Overall, the design is likely to resemble the FT-1 concept, which was introduced more than three years ago at the North American International Auto Show in Detroit. Features like the "double bubble" roof can be pointed out, as well as a distinguishable angled nose we’ve seen previously.

Though Toyota is keeping us mostly in the dark on performance details, but rumors suggest the base Supra could use a BMW-sourced turbocharged inline six, with a Le Mans-inspired hybrid system topping out the range. Both the Supra and the BMW Z5, in which it shares the same platform, will use the range of engines. No word on whether all-wheel drive will be available, but it seems unlikely.

Both cars will be produced at Magna Steyr in Graz, Austria and are slated for a debut late in 2017. Combined annual production is expected to stand at approximately 60,000 units, with the Z5 to receive a coupe derivative later in life.