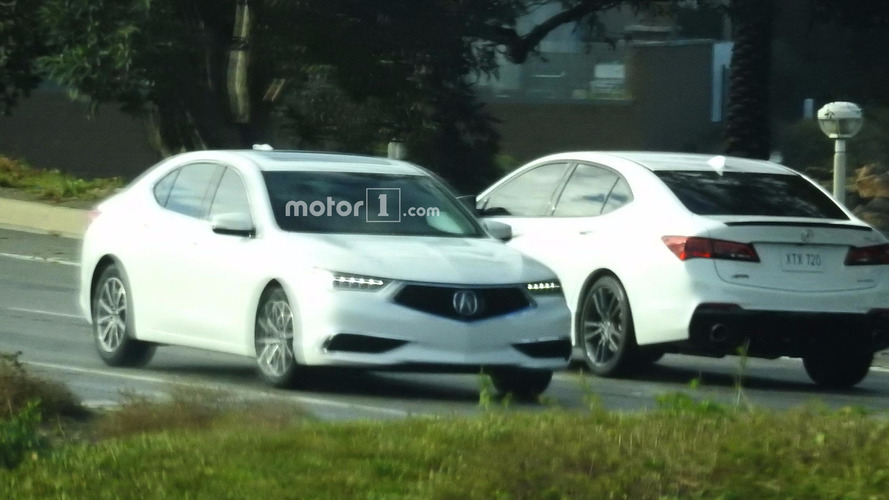 With no camouflage to hide behind, we can see the clear cues from the Acura Precision Concept. Three variants of the TLX are on display here.

There’s no point in Acura trying to keep the refreshed 2018 TLX hidden because this new batch of spy photos shows the sedan off from every angle. The camera car nearby suggests the company filming the new model for an upcoming promotional video.

The new front end takes obvious inspiration from the Acura Precision Concept from the 2016 Detroit Auto Show. The open, five-sided grille gives the sedan a sportier look than with the chrome beak that stretches across the current design. Revised LED headlights look sleeker than before, too. A sharp crease bisects the design by running down the hood and into the front fascia. The back features tweaked taillights and a black lower portion that looks quite sporty.

The sedans in these photos also have three different pieces for the front fascia, which suggests we are looking at a trio of model variants. The most basic design is on one of the white sedans and features simple inlets with chrome trim along the top (above).

The other white model (above) has more complicated styling, including a black center section and foglights at each corner with angular trim surrounding them. This one also appears to have a thin trunk lid spoiler.

Finally, the red TLX (above) has a similar look as the basic design but with foglights at each corner. A metallic strip of trim runs beneath the doors. The photo is blurry, but there appears to be a body-color trunk lip spoiler, too. The rear bumper also has chrome accents.

The other changes for the refreshed TLX remain a mystery. We expect the current 2.4-liter four-cylinder and 3.5-liter V6 engines to carry forward. One of the examples testing here might be a hybrid with the mix of 3.0-liter V6 and three electric motors from the latest MDX. Inside, a refreshed model’s usual mix of tech updates and revised materials would likely be on display.