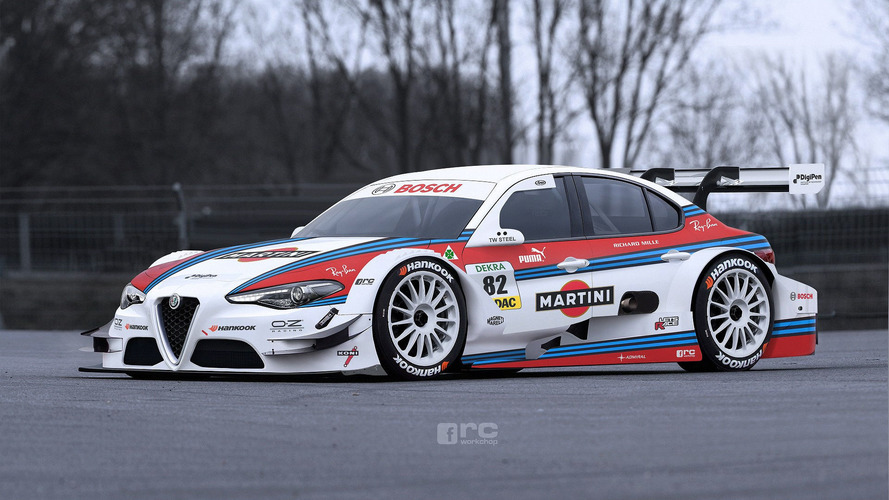 This Alfa would look great racing against modern DTM machinery from Audi, Mercedes-Benz and BMW.

This awesome rendering by Rc-workchop does of fabulous job of updating the look of Alfa Romeo’s massive success in touring car racing in the mid 1990s. By taking the modern Giulia and adapting the classic Martini Racing livery from the 155 V6 TI racer, we can imagine how the Italian brand’s latest sports sedan might look for German Touring Car Championship (DTM) competition.

The 155 V6 TI was a touring car racing superstar on the European scene in its era. The track-honed version sported a high-revving 2.5-liter V6 that ran through an all-wheel-drive system. The cars’ biggest victories came during a highly competitive era in the DTM against rivals like Mercedes-Benz and Opel. The potent drivetrain let Nicola Larini win 10 of 20 races during the 1993 season, which was enough for a drivers’ title for him and a manufacturers’ trophy for Alfa Romeo. He also finished third overall in 1994 and fourth in the International Touring Car Series in 1995.

Early examples of the 155 TI V6 raced in a bright red Alfa Corse livery with the brand’s famous emblem in white on the hood. Later, Martini Racing came on as a sponsor, and the cars received the firm’s iconic red, white, blue, and purple look like the one on this rendering.

While it's fun to dream, there's not much of a chance for the Giulia to appear on track in Martini’s classic livery outside of renderings like this one. Alfa currently offers a competition version of the Giulietta for the TCR series, but there’s no evidence yet that the company’s latest sport sedan having a factory-backed racer anytime soon. However, there’s an indication that the vehicle could be quite competent around a circuit because a Giulia Quadrifoglio is capable of a Nürburgring Nordschleife lap record for its class, including beating heavy hitters like a Porsche Panamera Turbo.