While the Z5 will be a roadster, the revived Toyota Supra will take the shape of a coupe.

BMW ceased production of the Z4 in August 2016, but it won’t be until next year when the roadster is going to be replaced. To be fair, it won’t be a true successor since the new model, which is being tentatively called “Z5,” will eschew the metal roof in favor of a fabric top. Seen here is a prototype of the new cabrio in a fresh batch of spy images while undergoing testing near the Arctic Circle.

As it was the case with the X7 prototype spotted last week, the Z5 is hiding its real design under add-on panels attached to the real body. The swirly camouflage does a good job at making the black rivets almost unnoticeable, but if you look closer you’ll see them on the front bumper, doors, and on the quarter panels. There’s a similar disguise at the back, but at least we get to check out the shape of the taillights as well as of the third brake light installed on the small trunk lid. Bear in mind the test vehicle did not have the final design of the front and rear clusters, but the shape is unlikely to change on the production model. 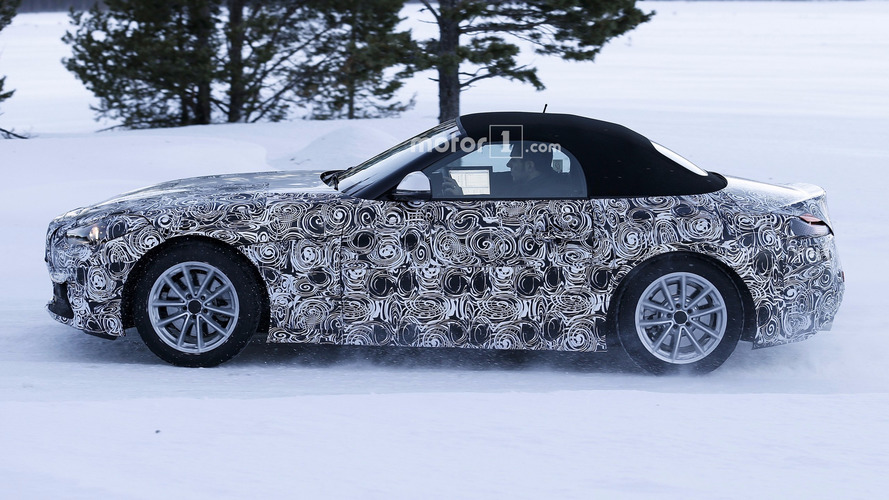 We don’t get a clear view of the cabin because the Z5 was caught on camera while in motion and it also had a black cloth over the dashboard. Previous spy shots have shown a prototype with an interior largely sourced from the defunct Z4, but this might have had a more evolved interior seeing as how the car is getting closer to receive its world premiere.

If you would rather have it as a coupe, the closest thing to a hardtop Z5 is going to be the new Toyota sports car believed to resurrect the much-loved “Supra” moniker. There are some voices indicating BMW will give the Z5 roadster a fixed metal roof at some point in the future, but take this rumor with the proverbial pinch of salt.

One of the very few certainties we have right now is that there won’t be an M version of the new roadster. Some say both cars will employ BMW engines and there will be a flagship model with electric boost thanks to Toyota’s hybrid knowhow.

The so-called “Boyota” duo will allegedly hit the assembly line next year in Graz, Austria at Magna Steyr’s factory. If the report is accurate, it means at least one of the two will bow before the end of 2017.