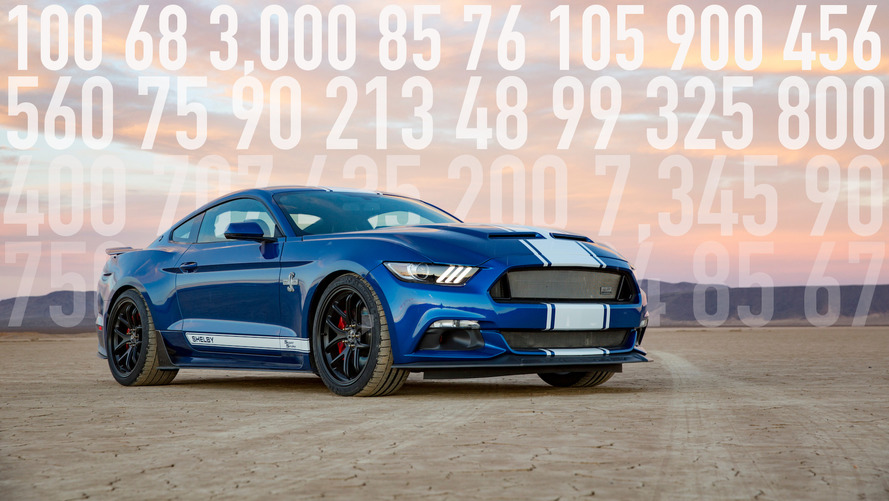 From Shelby American to Tesla, take a look back at some of the most eye-catching numbers of the week.

Numbers are all around us – whether we're breaking down the performance of a Ferrari 488, or comparing the price of a Model S to a Mercedes. Every week we pick out a few numbers that are so significant we have to give them a second look. Today we’re looking at key figures from Shelby American, Tesla, and Dodge.

Horsepower on offer in the new Shelby American Super Snake, thanks to a supercharged 5.0-liter V8 engine. The newest car celebrates the Super Snake’s 50th anniversary and starts at just $69,995. Shelby says the car will hit 60 miles per hour (96 kilometers per hour) in just 3.5 seconds, and blast down a quarter-mile drag strip in 10.9 seconds.

How much lighter, in pounds, the new Dodge Challenger Demon will be than a Hellcat. Though little is still known about the new performance machine, Dodge promises changes to the “wheels, steering, suspension, brakes, interior construction and components” will shed weight and help the Demon become Dodge’s “ultimate performance halo.” The Demon will debut in April.

Range, in miles, of the new Tesla Model S 100D model. That’s more than ten percent better than the previous 90D model. The Model X also sees a range improvement, with the electric crossover’s 100D model now offering 295 miles of range. Those impressive figures should help Tesla continue to lure in new customers; the company has yet to launch its more affordable Model 3 and missed its sales targets in 2016.

Number of U.S. states in which it is illegal to drive barefoot. Ever wanted to relax and stretch out on a long journey without shoes? Well, it’s not illegal to do so – but many states advise against it. Driving without proper shoes (or even in flip flops) can reduce a driver’s control over the pedals when behind the wheel. But in general, you can’t get a ticket just because you left the loafers in the trunk.

Price, in dollars per gallon, that gasoline would have to cost before most U.S. drivers would change their buying habits. That’s the result of a new study that looked at why car shoppers are currently not too interested in fuel economy when it comes to picking a new vehicle; only four percent of surveyed buyers list fuel economy as their most important factors when picking a car.