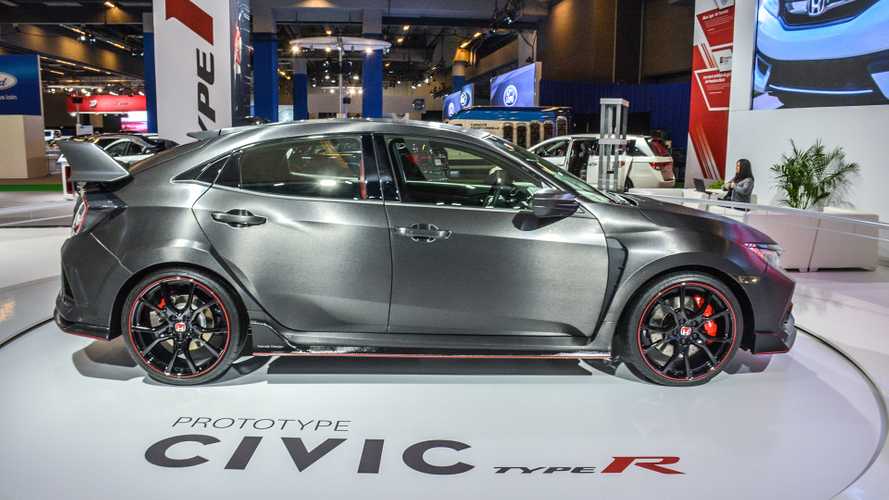 Our first look inside the new Type R – even if it’s just a “prototype.”

Honda is still calling the Civic Type R a “prototype,” but we’d say this car looks pretty close to finished. Regardless, the debut of the Civic Type R at the Montreal Auto Show gave us a chance to finally look inside the forthcoming hot hatch.

As our photo gallery reveals, the sports performance hatch showed off plenty of red flair on its steering wheel, dash, doors, and fiery-red Recaro seats. Those seats strap you in tight, but are also soft and comfortable. Compared to regular versions of the new Civic Hatchback, we also spot a metal shift knob, some carbon fiber trim pieces, drilled metal pedals, and a drive mode selector switch with "Comfort" and "R+" labels.

This is not, however, the first time we’ve seen the rest of the new Honda Civic Type R. It was on display at the 2016 Paris Motor Show in late September, as well as at the 2016 SEMA show in Las Vegas. But Honda officials decided bringing the car to Canada made a lot of sense for fans.

“The Honda Civic, as well as hatchbacks, are dear to the Montreal market, so it only makes sense to bring our flagship Civic to the show,” said Hayato Mori, Senior Manager, Product Planning & Business Development for Honda Canada.

Mori wasn't able to confirm specific engine details – that will be revealed in a few months’ time – however, we can confirm that the Civic Type R will only have a six-speed manual transmission.

“With a lightweight sports car in its purist form, there's was no choice but to go with a genuine six-speed manual transmission,” Mori said. Translation: no, there won’t be a CVT.

The gearbox is expected to be mated to a 2.0-litre turbo-four engine, speculated to be above the 300-horsepower mark. The horsepower figure may still not be figured out on the Honda end, as according to Mori, engineers are still fine-tuning the turbo mill.

As for its styling, the Type R is all about flexing its muscles, as if the regular hatch was put on the same steroid regiment as Barry Bonds. Everything just seems larger and unconstrained, including wide air vents and 20-inch alloy wheels, to be finished off with triple exhaust outlets and enormous rear wing.

The Civic Type R prototype on display uses a more premium finely-grained brushed aluminum-effect finish that will not come on the production version. Motor1 was also able to confirm that the car’s will come with Type R's trademark Championship White color, along with several other unique colors.

The production version of the 2018 Honda Civic Type R should debut this spring. More information, including engine details, should be revealed before that date. Pricing is expected to be in line with its main competitor, the Ford Focus RS.