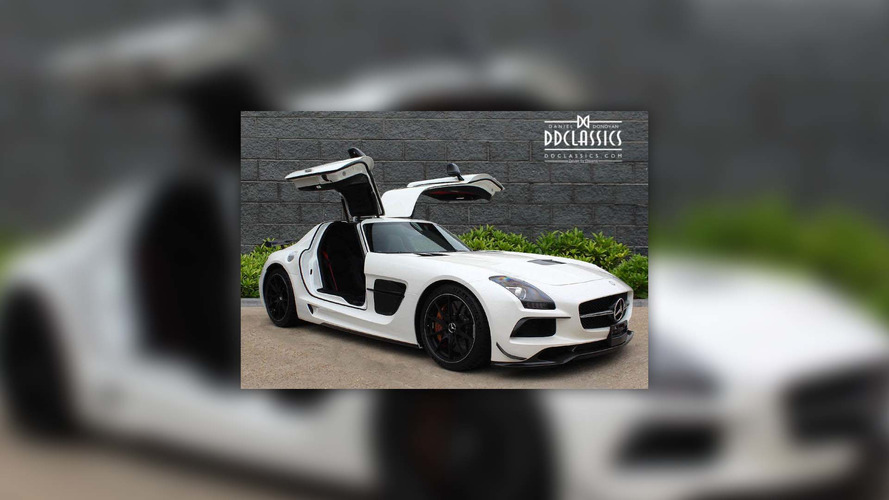 Having covered less than 1,000 miles, this SLS is as good as it gets.

One of the only 339 left-hand-drive units ever made, this mint condition Mercedes SLS AMG Black Series is in need of a new home should you have the means to spend an eye-watering £389,995. That’s roughly $480,000 / €449,200. We’re looking at a 2013 model year with the Designo Mystic White body paint and the optional aerodynamics package featuring extra flics on the front apron as well as an adjustable carbon fiber rear aerofoil.

Its heart and soul is the mighty V8 6208cc engine pushing out 622 horsepower (464 kW) and 468 pound-feet (635 Newton-meters) of torque delivered to the road via a dual-clutch seven-speed gearbox. It runs to 62 mph (100 kph) from a standstill in only 3.6 seconds, just like the Mercedes-AMG GT R. Go all out and the SLS AMG Black Series will hit 196 mph (315 kph), which is almost on par with Affalterbach’s most hardcore model on sale today.

According to the seller, the high-performance coupe “is in immaculate condition throughout” and its body “looks as though it just left the factory.” From what we’re seeing in the adjacent images, the dealer speaks nothing but the truth. The interior cabin with its black leather + Alcantara upholstery also appears to be top-notch, as it should be seeing as how the car has barely been driven.

As a final note, the next range-topping AMG model will be unveiled in September at the Frankfurt Motor Show where the F1-engined “Project One” will make its world premiere. It will have a monstrous 1,000 horsepower powering what will be “probably the most fascinating two seater that will ever hit the road.”

You can check out both cars at the source links below.