The mid-cycle refresh will also bring a different steering wheel and some mild revisions on the outside.

The latest-generation C-Class still feel fresh to most of us, but the W205 sedan was actually introduced three years ago in Detroit. The prototype spotted here is the S205 wagon getting ready to receive a mid-cycle nip and tuck. There’s not much to say in terms of exterior updates as only the front bumper is camouflaged to hide what will likely be some discreet tweaks.

The test vehicle was equipped with the standard halogen headlamps, but previous spy images have shown the C-Class will receive a new set of full-LED headlights as well as some mildly revised taillights. Expect the rear bumper to also go through a minor cosmetic surgery, but nothing to write home about.

Things get more interesting once you virtually hop inside the prototype’s cabin since it hosts a new touchpad for the updated infotainment system. We’re not entirely sure if this is indeed the final look taking into account the touchpad is installed where you normally find the rotary knob for the COMAND system on the current C-Class. There’s no sign of that knob in the top picture, so it has either been removed altogether, or this car had a temporary setup. 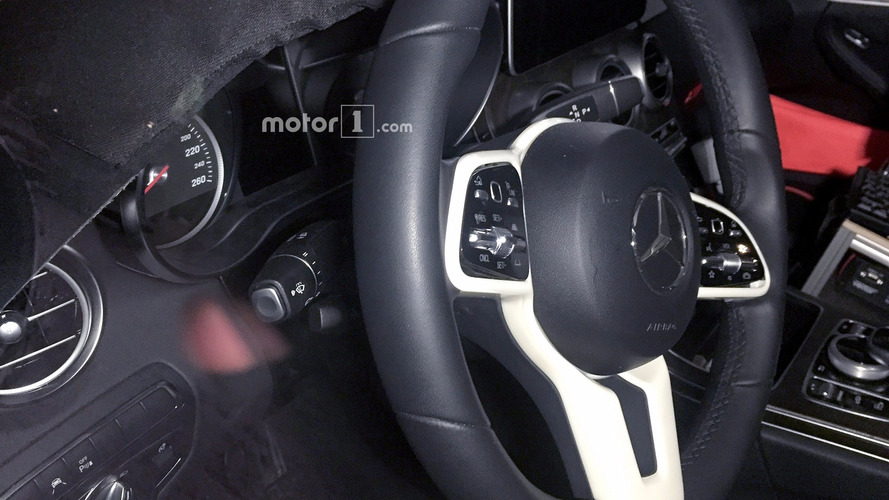 Interestingly, the image above shows a different prototype with the rotary knob and the touchpad exactly the same as on the pre-facelift model. This one seems to host a new leather-wrapped steering wheel with different buttons and knobs featuring a chrome finish.

A new family of inline-six engines will debut this year on the S-Class facelift, but it’s too early to say whether these will find their way underneath the C-Class’ hood so soon. A four-cylinder 2.0-liter gasoline engine dubbed “M 264” has already been announced and it has bigger chances of being offered in the C. The engine will have a “specific output of around 100 kW” (134 hp) per liter and is going to be equipped with twin-scroll turbochargers, a belt-driven 48 V starter-alternator, and an electric 48 V water pump.

Mercedes will likely introduce the facelifted C-Class sedan in the second half of this year, with the wagon to follow several months later and then in the latter half of 2018 by the coupe and convertible.