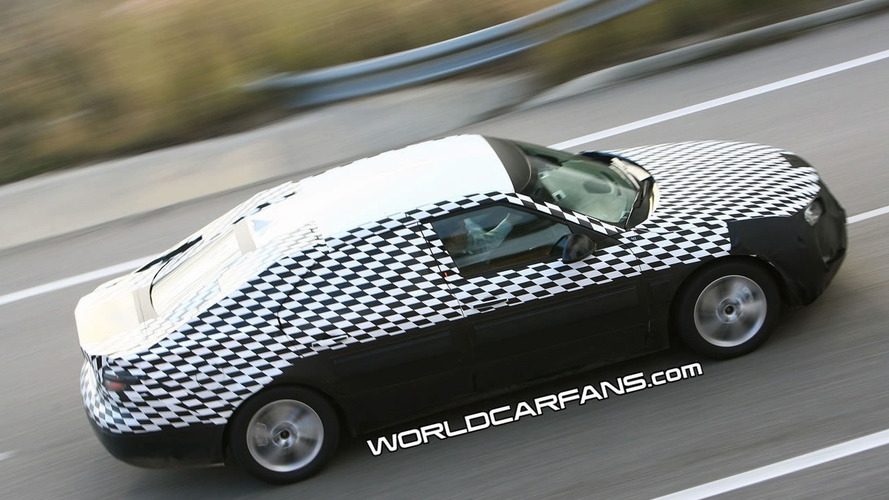 The next generation SAAB 9-5 has been spied doing some road testing. It's bigger, longer and more spacious.

Spy photos have finally been taken of the next generation SAAB 9-5. SAAB has done quite well so far in keeping the 9-5 out of the public eye as well as the spy phtotogrpaher's eye. Since it's still undergoing testing a lot of camouflage covers most of the important bits of the car such as the character lines, shape of the rear and so on. Nevertheless it can be made out that the roof flows much smoother into the rear, making it look almost coupe-like. Also some styling cues from 9-4X BioPower concept should appear in the final design.

The 9-5 will gain some extra weight, height and length over the current model. The wheelbase is also being increased by 14cm to make the car a large one indeed. It should fit in nicely within its competition cluster which consists of cars like the Mercedes-Benz E-Class, Cadillac STS and Volvo S80.

Our spy pictures portray a prototype fitted with a 2.0-litre petrol turbo engine making 210hp. It will be sold with a choice of manual and automatic transmissions. A higher 2.8-litre V6 will be available in the European market while the US gets an even bigger 3.6-litre V6, the same one found in the Buick Lacrosse. Diesel is expected as well as a hybrid model.

A public unveiling of the next SAAB 9-5 will happen at the Frankfurt Motor Show in September.