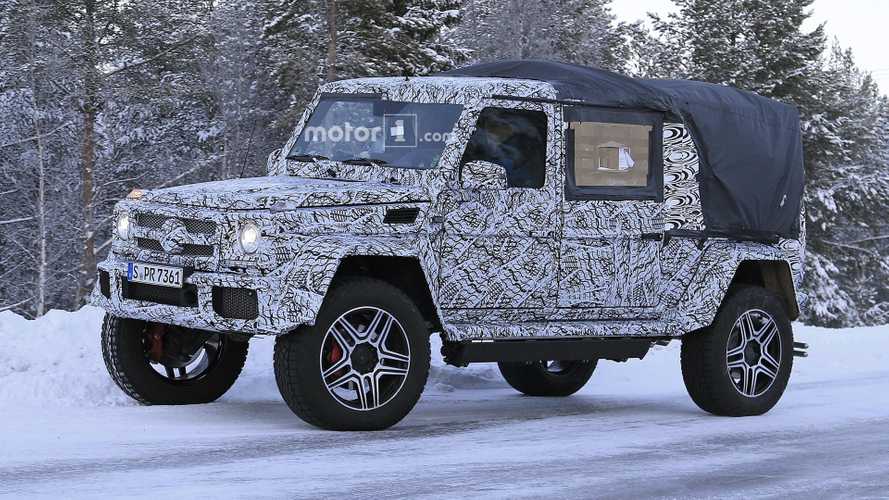 It seems the Mercedes 'G-Class Squared' will spawn a more utilitarian version with the same boxy design we all love.

The elongated G-Wagen was caught on camera for the first time exactly a month ago and at that moment it was believed to be a long-wheelbase G. However, now we’re not so sure because this new test vehicle is giving us the impression we’re dealing with a double cab pickup rather than simply a stretched G500 4x42. Either way, it seems Mercedes has plans to diversify the G-Class family for the off roader’s next generation slated to come out most likely in the second half of the year. That being said, we will probably have to wait until 2018 to see this new derivative bound to adopt the hardcore portal axles of the regular 4x42 model.

Another certainty is the boxy shape of the body, which thankfully will continue in the G-Class’ next installment. While the design will be largely carried over, there are going to be some major changes underneath the familiar metal seeing as how the G will be blessed with new underpinnings. A massive weight loss of at least 440 pounds (200 kilograms) has been mooted, but we’ll have to wait and see whether this report will pan out. If it will, the diet will be even more impressive after taking into consideration the new G-Class will be about 4 inches (10 centimeters) wider than the outgoing “463” model, which has been around since 1990.

In regards to what will power it, the G63 is expected to lose the biturbo 5.5-liter V8 in favor of Mercedes-AMG’s new biturbo 4.0-liter V8 already available in a multitude of performance models. The top dog G65 will solider on with the mighty V12, but only very few will get that. The bread and butter of the range will be a diesel, which is expected to take the shape of an all-new inline-six (yes, you’ve read that right). Codenamed “OM 656,” the new motor will debut this year in the S-Class facelift and is going to generate more than 313 hp (230 kW).

The revamped Mercedes G-Class in the regular versions will likely receive its world premiere at the Frankfurt Motor Show in September, with sales to kick off before the year’s end or early 2018.