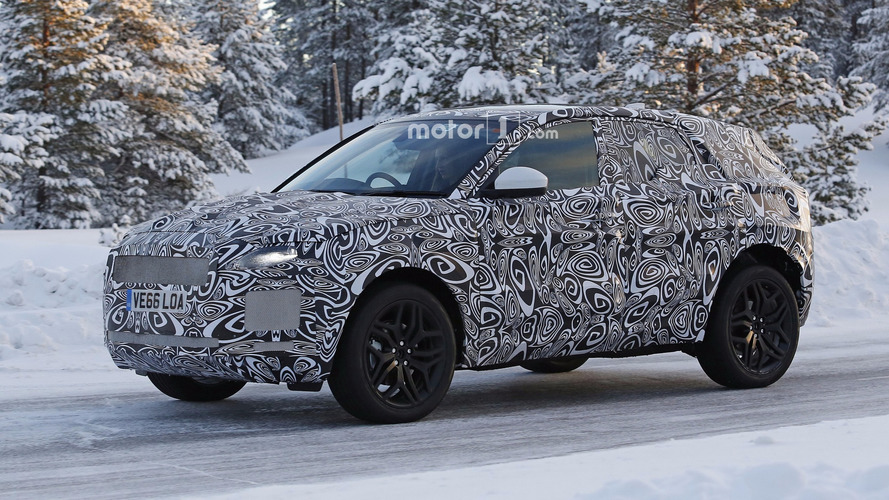 Honey, I shrunk the F-Pace.

Driven by a pretty lady in a winter wonderland, the Jaguar E-Pace will be the brand’s second crossover after the F-Pace from where it will inherit most of the exterior design. At least that’s the vibe we are getting from the disguised prototype, but things might change once the psychedelic camouflage will come off to reveal the final appearance.

If you’re finding the F-Pace too expensive and/or too large, the E-Pace should prove to be the right choice, as it will considerably undercut its bigger brother and will have roughly the same size as a Range Rover Evoque. Jaguar’s posh five-seat crossover will be underpinned by the same platform used by the new Land Rover Discovery Sport and is going to be powered by an assortment of turbocharged 2.0-liter gasoline and diesel engines from JLR’s Ingenium family. Further down the line, an all-electric derivative might join the lineup if we were to rely on the rumor mill.

Expect the Jaguar E-Pace to be introduced in May, following the launch of the Range Rover Sport Coupe (name not confirmed) allegedly scheduled for early March at the 2017 Geneva Motor Show. It will go on sale in the second half of the year and we won’t be too surprised if it will end up as Jaguar’s best-selling model seeing as how the F-Pace currently holds the title.

There are contradicting reports about where the E-Pace is going to be assembled. Some are saying Magna Steyr will handle production at its plant in Graz, Austria where the I-Pace will also be built, while others are suggesting it will be manufactured alongside the aforementioned Discovery Sport at the Halewood factory in U.K. We’ll know for sure in just a few months.