2018 Audi A8 render sees into the flagship's future 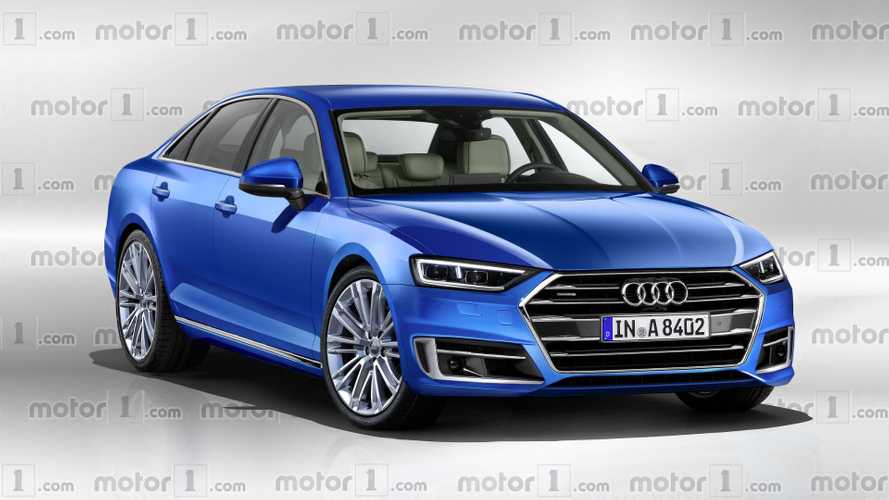 The Prologue concept was a stunner, but will the next-gen A8 manage to impress?

Audi is just about ready to send the seven-year-old A8 (D4) to the retirement home and introduce the all-new model. It’s going to happen later this year, quite possibly at the Frankfurt Motor Show in September, although an online reveal might occur sooner. Taking into consideration recent spy images have shown camouflaged prototypes wearing the full production body, our sister site OmniAuto.it has decided to digitally remove the disguise and display the next-gen A8 in its metal.

Aside from being Audi’s range topper, the new A8 will also be the company’s first production model entirely designed by Marc Lichte and his team. He took over as the man in charge with design at Audi in February 2014 and has managed to impress us so far with those gorgeous Prologue concepts, starting off with a Coupe followed by an Avant and then an Allroad.

Getting back to the A8 at hand, it will usher in a new design language for Audi, but that doesn’t mean there are going to be radical changes, as evidenced in the attached speculative render. In other words, it’s going to be evolutionary rather than revolutionary.

More significant changes will occur inside the cabin where the fullsize premium sedan will debut the company’s second-generation Audi Virtual Cockpit and the MIB2+ (Modular Infotainment Platform) powered by Nvidia’s Tegra K1 processor. Another first will be the implementation of a traffic jam pilot function enabling the vehicle to “take over full control at times.”

By making the switch to the MLB Evo platform like the latest Q7, the 2018 Audi A8 is rumored to go through a draconian diet bringing a weight loss of as much as 200 kilograms (441 pounds). The VW Group’s new W12 6.0-liter engine from the Bentley Bentayga will be available, while the hot S8 has already been spied and is said to boast a biturbo 4.0-liter V8 from the new Porsche Panamera Turbo where it churns 550 horsepower (404 kilowatts) and 770 Nm (567 lb-ft).

A plug-in hybrid derivative is on the agenda as well and we won’t be too surprised if the SQ7’s powertrain will also find its way under the hood of a hot A8 diesel. As a reminder, the SQ7 and the Bentley Bentayga Diesel share a 4.0-liter V8 TDI featuring an electric powered compressor to unleash 429 hp (320 kW) and a whopping 900 Nm (664 lb-ft).

Expect the all-new Audi A8 to go on sale towards the end of the year when it will fight among others the new Lexus LS, the forthcoming Mercedes S-Class facelift and the BMW 7 Series. It’s going to have an SUV-coupe companion in the form of the Q8 currently being showcased in Detroit as a concept and already spotted in prototype guise ahead of a 2019 launch.