Despite the camouflage, there's no mistaking that this is a kid brother to the F-Pace. There's a distinct family resemblance.

The Jaguar E-Pace compact luxury crossover is now in the arctic for cold-weather testing, and new spy shots show off an example with the production body under heavy camouflage. Previous photos have shown the forthcoming model testing under the body of an F-Pace and Land Rover Range Rover Evoque.

The E-Pace takes clear design cues from its big brother, the F-Pace. Like in previous renderings, the two models have very similar faces, including wide, rectangular grilles and large intakes at each corner of the lower fascia. The differences are more apparent in profile where the E-Pace's shorter wheelbase is more obvious. The back of this test mule has a fairing around the rear window, but it appears to be a temporary panel to hide the real shape if you take a closer look. The skinny taillights behind the camouflage also evoke Jag’s other crossover. 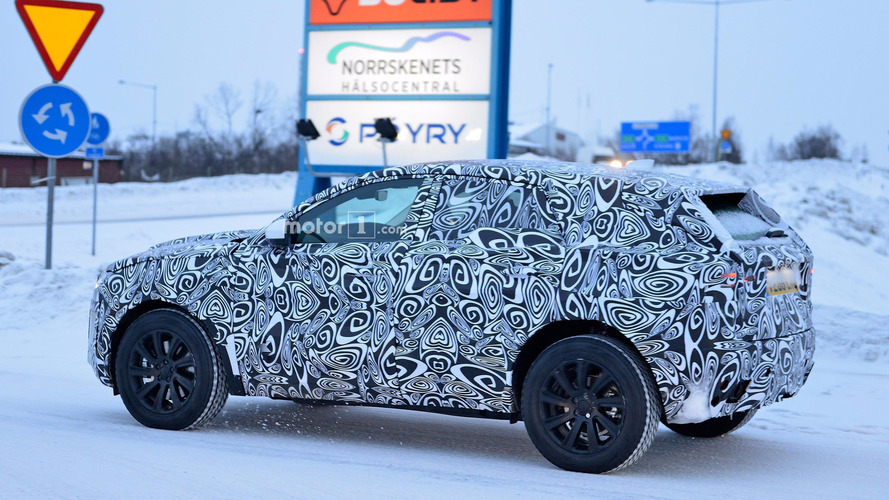 Jag seems to be following the lead of examples like Audi's crossovers and Mercedes-Benz's sedans by taking a unified design approach that offers a similar look in various sizes. The strategy is a growing trend among European premium automakers.

Reports suggest the E-Pace would be available with a wide range of powerplants. Lower trim models would use Jag’s 2.0-liter four-cylinder Ingenium engine family, including gasoline- or diesel-fueled versions depending on the market. The company’s forthcoming range of inline-six mills might also be in the lineup. The engine arrives as soon as this year and can reportedly produce up to 500 horsepower depending on the tune. A diesel hybrid and purely electric variants are also allegedly under development for the compact crossover.

We could see the E-Pace in production guise sometime in 2017 but sales might not begin until 2018. Jaguar is reportedly contracting with Magna Steyr in Graz, Austria, to handle the compact crossover's assembly.