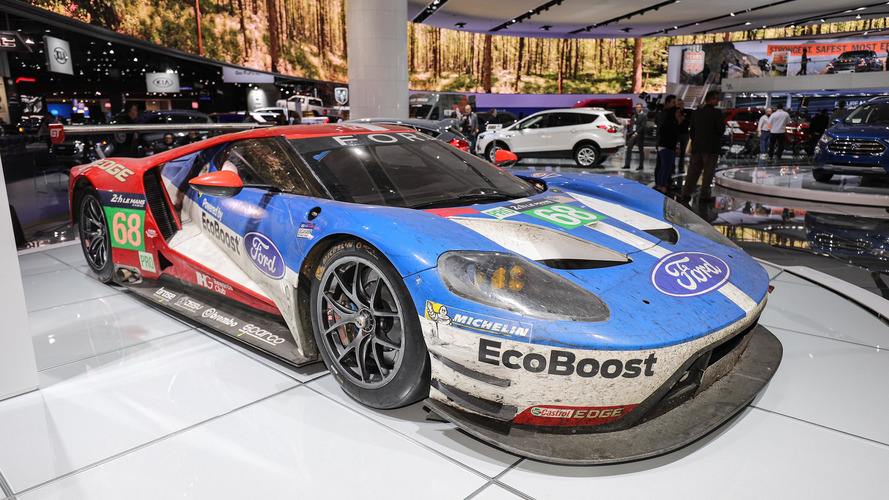 Nascar, sports cars, the IndyCar Series, rallying, and even a future movie star are all on display in Detroit.

While the Detroit Auto Show puts a massive emphasis on new vehicle and concept debuts, automakers bring a significant number of racing machines along with them, too. It’s an extension of the old adage of winning on Sunday leads to selling on Monday. Check out our massive, 107-image gallery of the hottest competition vehicles on the floor this year.

While he might not race in the real world, a life-size Lightning McQueen has a featured role with his own booth in Detroit. Unlike the teaser trailer, the car is actually in once piece, but McQueen is smaller in real life that you would expect. Check out the latest promotional clip for the upcoming animated blockbuster here.

Unlike Lightening McQueen, the 2018 Toyota Camry is actually competing on the track, specifically in Nascar. The road-going model’s chief designer, Masato Katsumata, worked with the teams at Calty Design and TRD to come up with a look ready for the Daytona 500.

The IndyCar Series also has a whole booth on the floor at this year’s show. Not only can attendees check out Chevrolet and Honda’s race cars, there’s even a ride-on simulator that gives folks a taste of what it’s like to experience one of these high-performance vehicles.

Several rally cars are ready to get dirty in Detroit, too. Volkswagen gives a Beetle GRC a place of honor. Not too far away, Subaru’s booth showcases two more competition-ready. On one side of the display, WRX STI is ready to compete in the American Rally Association, which the automaker sponsors. In addition, the Subaru WRX STI Time Attack touts the company’s latest record lap of the Isle of Man TT course.

Sports car racing fans should really enjoy the machinery on display in the Motor City. The BMW M6 GT3 and Acura NSX GT3 look ready to compete in the WeatherTech SportsCar Championship in the United States. While they look ready for the track, The GTE-spec Ford GT is on display in the same condition as when it took a class victory at the 24 Hours of Le Mans in 2016. Not everyone can drive for a top team, and Mazda has the MX-5 Miata Cup at the show to tempt amateur racers.

Click through the full gallery below for a closer look at all of these machines, including some others like an Aprilia racing bike, Ford Raptor for Baja, and a dragster.