Skoda's 'Heart of the Brand' gets a mid-cycle refresh bringing a slight increase in length and a wider rear track.

The Skoda Octavia facelift has received its proper premiere at an event organized in Vienna, Austria tonight. On this occasion, VW’s Czech brand has published an extensive gallery with the revised model in a multitude of flavors, including the more luxurious Laurin & Klement, the rugged Scout, and the sporty RS.

Although it’s only a facelift, the refreshed Octavia is actually a few millimeters longer than before. In addition, the width of the rear track has increased by 20 or 30 mm, depending on version. For example, the RS’ rear track is now 30 mm wider than before.

Skoda is axing the optional bi-xenon + LED daytime running lights of the “old” Octavia’s headlights to make way for a full-LED setup. At the back, the mildly updated taillights are going to be offered in two versions. Although Skoda doesn’t go into any details, in the online configurator there is a “top LED” option, which likely refers to an all-LED setup. 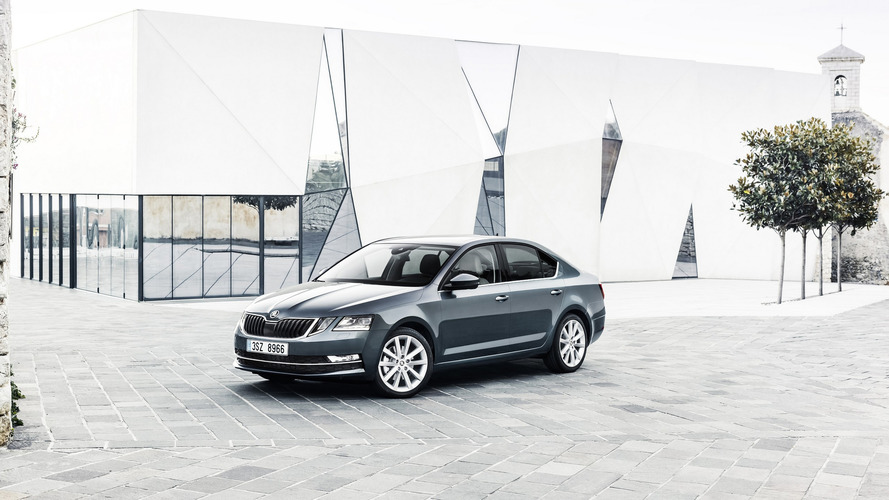 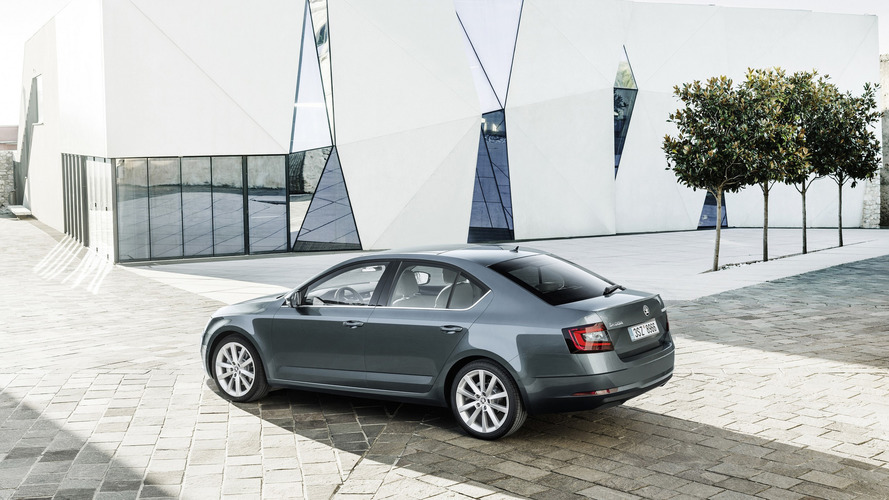 As for power, Skoda is selling the regular Octavia with a total of four TSI and four TDI engines, while a CNG variant is also available. With one exception, the units have been essentially carried over and vary in output from 86 hp (63 kW) to 184 hp (135 kW). The exception we’re talking about is the 150-hp 2.0 TDI that from now on will be available with a seven-speed, dual-clutch gearbox on the all-wheel-drive Octavia, such as the aforementioned Scout. It’s actually the first time when an AWD-equipped Octavia gets a seven-speed DSG.

The high-performance RS with its 2.0 TSI engine now develops 230 hp, which represents a 10-hp increase and matches the now defunct limited-run RS 230. Oddly enough, Skoda had promised to introduce “an exclusive high performance RS version” at the event, but there was no sign of it. That being said, we have a hunch it will be revealed very soon. The 2.0 TDI-powered Octavia RS will soldier on with the same 184 hp (135 kW) and a choice of either FWD or AWD.

Both RS models sit 15 mm lower than the lesser Octavias and are available with an array of 17- to 19-inch alloy wheels. The dynamic duo also gets an ESC stability system with XDS+ electronic inter-wheel lock and you can spend more to hear fake engine noise via the “Performance Sound Generator.” 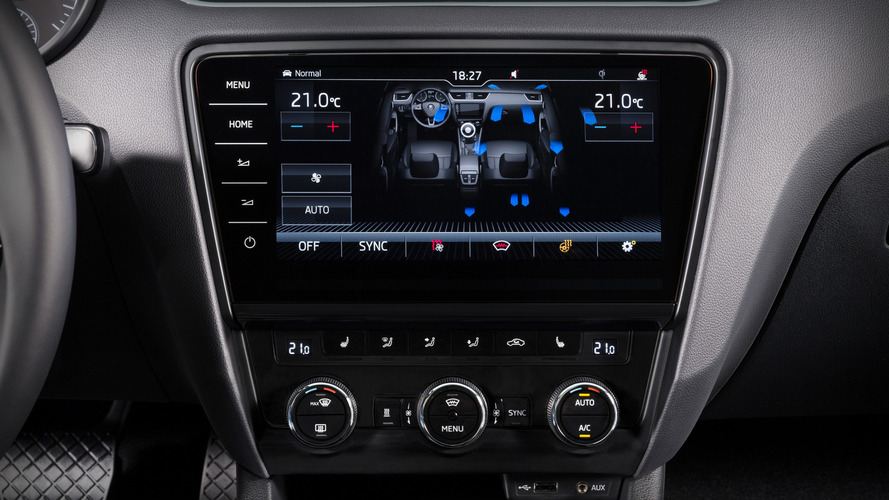 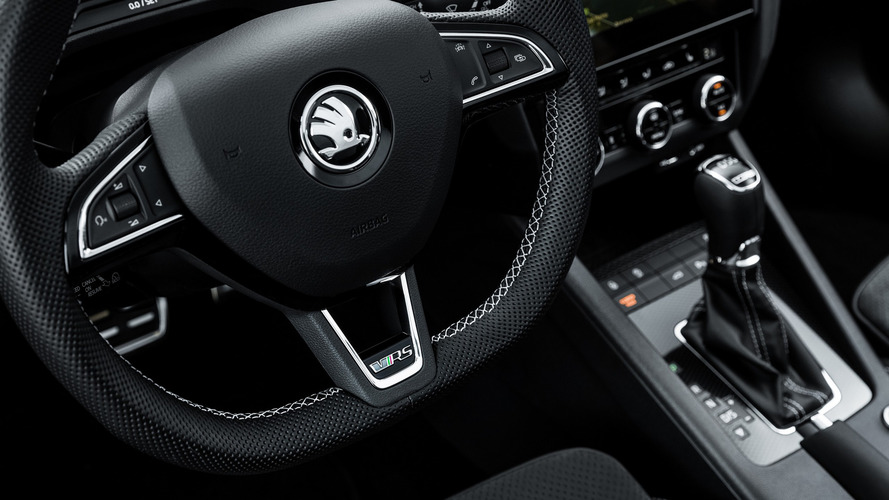 Stepping inside the cabin, novelties include LED ambient lighting, Wi-Fi hotspot with LTE, two USB ports and folding tray tables in the back, a heated steering wheel, a customizable key, and a removable LED torch for the Combi. The infotainment systems have been upgraded as well, with Bolero and Amundsen growing from 6.5 to 8 inches whereas the top-of-the-range Columbus now has a 9.2-inch touchscreen, up from the previous 8 inches. All three come with capacitive displays flanked by touch-sensitive buttons for a more modern look.

New driver assistance systems have been added as well, although most of them are going to cost you extra. Options such as Blind Spot Detect and Rear Traffic Alert are new to the Octavia, as are Trailer Assist and a Predictive Pedestrian Protection function.

The 2017 Skoda Octavia facelift is already available in most European countries, with deliveries to begin in the next couple of months.

Mladá Boleslav / Vienna, 10 January 2017 – An even more striking design, new equipment and state-of-the-art technology for assistance, infotainment and connectivity – the ŠKODA OCTAVIA presents itself a new, in top shape. The comprehensive upgrade has been applied to the hatchback as well as the Combi. With the new design language, now ŠKODA’s compact bestseller has received an injection of even more vigour and emotiveness too.

It is the heart and soul of ŠKODA, it embodies all of the Czech car manufacturer’s strengths and lays the foundations for its success – the ŠKODA OCTAVIA. The large compact car offers interior space that is among the most generous in its segment and brings the equipment and the technology of a mid-size car into the compact segment. Its design is striking, its quality is on the highest level, and above all it represents exceptional value for money.

The OCTAVIA is ŠKODA’s top seller: since its market launch in 1996, the Czech car manufacturer has produced more than five million ŠKODA OCTAVIAs. In 2016, now in its third generation, the large compact car made up more than 40 per cent of ŠKODA’s total sales worldwide with 436,000 vehicles sold. 255,000 cars found buyers in Europe, 4.2 per cent more than in the previous year.

The model range has fanned out: additions to the hatchback and Combi are the all-terrain OCTAVIA SCOUT, the extremely economical OCTAVIA G-TEC with CNG powertrain, as well as the RS models, which – as with the higher-end variants – are increasingly moving into the focus of customers. Comprehensively upgraded, the OCTAVIA hatchback and the OCTAVIA COMBI are now starting the second half of their life cycle. In many European countries, they will be available for order from the end of 2016.

Design
The ŠKODA design team have streamlined the OCTAVIA’s lines even further. The new front end with wider radiator grille, which has been expanded by introducing additional headlights with a crystalline look, and the even wider air inlets with honeycomb structure in the redesigned bumper create a masculine and dynamic look – and provide increased recognition value. As an option, the headlights are available in full-LED technology with adaptive front headlights (AFS).

The LED tail lights come in a choice of two variants; the C-shaped lights now illuminate in a uniform manner across the surface. The upgraded ŠKODA OCTAVIA has grown a few millimetres in length, and the width of its rear track has increased by 20 or 30 mm (depending on engine and rear axle).

The interior comes across as high-quality and functional, the multifunction display and the air-conditioning controls have been retouched slightly. Subtle lighting units in the doors (optional) provide ambient lighting which can be adjusted to one of ten different colours.

Infotainment systems and ŠKODA Connect
The infotainment systems in the ŠKODA OCTAVIA are part of a new generation. Their capacitive displays react to even the lightest touch. With the exception of the standard Swing music system, all the infotainment systems (optional) feature a glass design. The top-of-the-range Columbus navigation system comes with a 9.2-inch display, provides passengers with a Wi-Fi hotspot and has an optional extra LTE module for super fast data transfer. In addition, Phonebox enables inductive smartphone charging.

The connectivity features are also groundbreaking. ŠKODA Connect offers a range of new mobile online services that are divided into two categories, with the Infotainment Online services providing information and entertainment, and the Care Connect services providing assistance and support. Other online services, including remote access to the car, operate using the ŠKODA Connect app on your smartphone. The SmartLink+ platform incorporates the Apple CarPlay, Android Auto, MirrorLink™ and SmartGate standards to pair the mobile phone with the car.

Driver assistance systems
The new generation of electronic assistance systems makes driving the upgraded ŠKODA OCTAVIA even safer and more comfortable. They surpass the usual level in the compact segment by far – in typical ŠKODA style – and there is a wide range to choose from. Trailer Assist, the Predictive Pedestrian Protection function, Blind Spot Detect and Rear Traffic Alert are new to the portfolio. The same applies to Crew Protect Assist; it works together with Front Assist including the City Emergency Braking function. Park Assist comes in a new, enhanced configuration.

Engines and chassis
The range of engines consists of four TSI engines, four TDI engines and one CNG powertrain; they combine strong performance with low consumption. Their power ranges from 63 kW (86 PS) to 135 kW (184 PS). The 1.4-l G-TEC with 81 kW (110 PS) is a particularly economical engine which is designed for use with CNG.

Besides manual gearboxes, DSG transmissions with six or seven speeds are available for almost all of the engines; ŠKODA offers all-wheel drive for the 1.8 TSI and the 2.0 TDI. Optional Dynamic Chassis Control (DCC) is a highlight for the chassis – with it, the driver can regulate the character of the suspension by selecting the Comfort, Normal or Sport modes. All engines conform to the Euro 6 standard.

Interior space and equipment
When it comes to interior space, the ŠKODA OCTAVIA continues to set benchmarks. The hatchback and the Combi each offer 1,782 mm of interior length and 73 mm of kneeroom in the rear. Their boot capacities measure 590 and 610 l respectively, with the back seats folded down it’s 1,580/1,740 l. For the Combi, an electric tailgate is available as an option.

Some new ideas have been added to the many ‘Simply Clever‛ features already offered by the ŠKODA OCTAVIA to date: two USB ports in the rear, folding tray tables on the back of the front seats, bottle holders that make the opening of PET bottles easier, and a removable LED torch in the Combi’s boot. The heated steering wheel and customisable keys in particular ensure extra comfort and convenience.

The RS models
At the top end of the upgraded OCTAVIA portfolio are two RS engine variants – the 2.0 TSI petrol and the 2.0 TDI diesel. The hatchback and the Combi combine their high performance with the great strengths of the model range and the new groundbreaking technology for the infotainment, connectivity and assistance systems.

The RS models also present themselves in the new, streamlined design with the expressive four-eyed face. The headlights, fog lights and tail lights feature LED technology; details like the black radiator grille, the distinctive air ducts, the spoiler and the large exhaust pipes hint at the dynamic character. In the interior, there are RS sports seats with leather/fabric covers (Alcantara® as an option), elegant decorative strips and ambient lighting.

For the ŠKODA OCTAVIA RS 2.0 TSI, the power output has been increased to 169 kW (230 PS), the top speed is 250 km/h. The 135 kW (184 PS) 2.0 TDI wows with its efficiency – over 100 km, it consumes only 4.5 litres of diesel on average (115 grams of CO2/km). The RS models are available with a 6-speed manual gearbox or a 6-speed DSG transmission. The sports chassis lowers the body by 15 mm, the rear track is 30 mm wider than before. Wheel dimensions range from 17 to 19 inches. The ESC stability system with XDS+ electronic inter-wheel lock, and Performance Mode Select with the Performance Sound Generator (optional) complete the dynamic character of the upgraded OCTAVIA RS models.