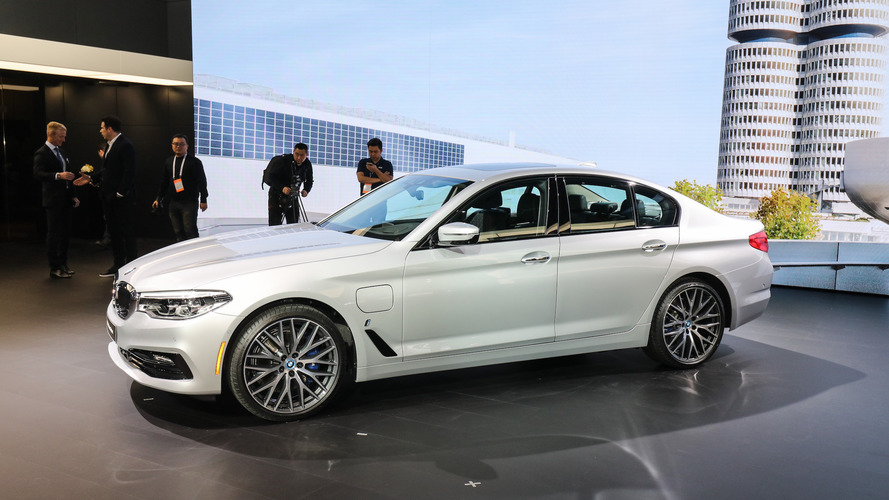 It’s not all crossovers and trucks at the 2017 Detroit Auto Show. BMW is showing the 530e iPerformance, the plug-in-hybrid version of the new 5 Series sedan.

The car marries a 2.0-liter turbocharged inline-four gas engine with an electric motor and a 9.2 kilowatt-hour lithium-ion battery pack. The gas engine produces 180 horsepower and 215 pound-feet of torque, while the motor is rated for 95 hp and 184 lb-ft. That gives a combined peak of 248 hp and 310 lb-ft, which is enough to propel the rear-wheel-drive version of the car to 60 miles per hour in 6.0 seconds and on to a top speed of 130 mph. The all-wheel-drive 530e xDrive will hit the benchmark in 5.8 seconds.

BMW’s hybrid setup has the electric motor running through the car’s eight-speed automatic transmission, meaning the car still “shifts” even in EV mode. That means BMW does not need to fit a torque converter, which the company says saves some weight to counteract the mass of the motor and battery.

BMW says the 530e can travel about 15 miles on electricity alone; in Europe, the car is rated for 28 miles of range, but U.S. plug-in ranges are usually lower because our testing regimen is tougher. BMW says that the car will be able to charge in seven hours from a household 120-volt outlet, or less than three hours using BMW’s 3.6-7.2 kW charger.

As is the case with most hybrids, the 530e has several driving modes to configure how the driver wants to use gasoline or electric power. Auto eDrive lets the car decide which power source to use, and limits all-electric driving to 56 mph. Max eDrive uses as much battery power as possible, and lets the motor drive the car at up to 87 mph. Battery Control mode is designed to preserve the battery’s charge as much as possible.

The 530e will get all the same technologies and luxury features as other versions of the new 5 Series. Safety tech includes lane-departure prevention, “Evasion Aid” that helps drivers swerve around hazards, adaptive cruise control, and a 360-degree camera system.