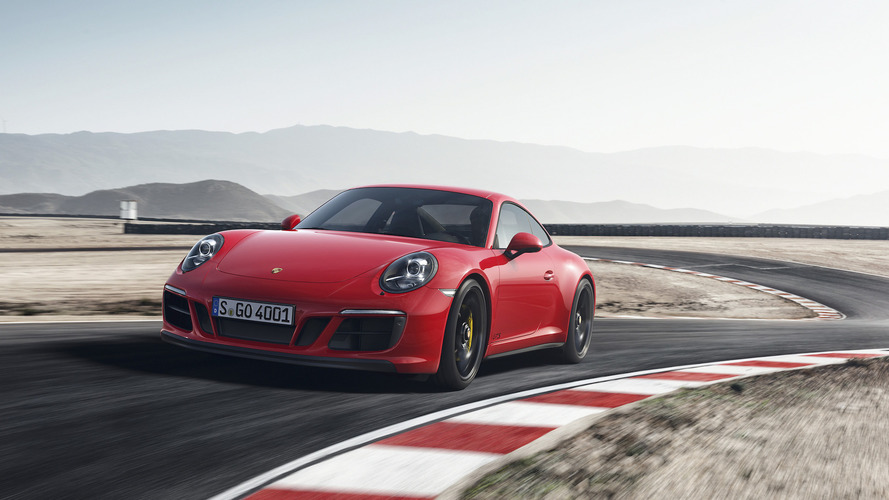 An upgraded turbo and an all-wheel-drive system shoots it to 62 mph in just 3.6 seconds.

The Porsche range is getting even larger. Thankfully, that doesn’t mean another crossover. The new 911 GTS will arrive in March, where it will be available to buyers in coupe, convertible, and of course, Targa variants.

With the option of either rear- or all-wheel-drive, the new 911 GTS puts to use a 3.0-liter turbocharged six-cylinder engine, pushing the total output to 444 horsepower (331 kilowatts) and 405 pounds-feet (550 Newton-meters) or torque. All that extra power is handled via a seven-speed manual or PDK.

Apart from power, the new GTS gains features like Porsche’s Active Suspension Management system as standard, making the car lower by about .3 inches (10 millimeters), and a Sport Chrono pack, which tacks on dynamic engine mounts and a sports exhaust system.

All said and done, the fastest GTS in the range is good for a 0-62 mph (100 kmh) time of 3.6 seconds with the PDK and Carrera 4 all-wheel-drive system equipped. It’s also the most efficient model as well, returning as much as 28 miles per gallon (8.3 liters/100 kilometers).

No word on pricing – but just to add some incentive, Porsche does say that buyers will get a free driving day at the company's facility at Silverstone with the purchase.

Porsche is expanding the 911 product line with the GTS models. From March 2017, a total of five variants will be available in Germany: the 911 Carrera GTS with rear-wheel drive, the 911 Carrera 4 GTS with all-wheel drive – both of the above availa-ble as a Coupé and Cabriolet – and the 911 Targa 4 GTS with all-wheel drive. A newly developed turbocharger for 3.0-litre six-cylinder flat engine increases power to 331 kW (450 PS). The engine delivers 22 kW (30 hp) more than the 911 Carrera S and 15 kW (20 hp) more than the corresponding GTS prior model with a naturally aspirated engine. All variants are available with a manual seven-gear transmission or optional Porsche Doppelkupplung (PDK).

More power for more performance
The maximum torque of 550 Nm provides even better acceleration and elasticity figures. The torque is available between 2150 and 5000 rpm. Porsche Active Suspension Management (PASM) is included as standard on all GTS models. The GTS Coupés feature the PASM sports chassis, which lowers the body by ten millimetres. The fastest sprinter in the family is the 911 Carrera 4 GTS Coupé: With Porsche Doppelkupplung (PDK) and the Sport Chrono Package as standard, it races from zero to 100 km/h in 3.6 seconds. All GTS models feature a top speed in excess of 300 km/h. The frontrunner at 312 km/h is the Coupé with manual transmission and rear-wheel drive.

Despite the increase in performance, the GTS remains efficient – the 911 Carrera GTS with PDK, for example, consumes only 8.3 l/100 km according to the NEDC. This corresponds to CO2 emissions of 188 g/km.

Typical GTS: Numerous black elements both inside and out
The GTS models stand out within the 911 model line not only in terms of technology, but also in their visual design: All of the vehicles are based on the wide all-wheel-drive chassis, which measures 1852 mm even on the rear-wheel-drive models. The new Sport Design front apron emphasises the sporty character. The front end is aerodynamically optimised. A low front spoiler and increased rear spoiler extension height further reduce the lift forces on the front and rear axle compared to the Carrera S models. On the rear, the GTS is unmistakeable: smoked tail lights, silk-gloss black air intake grille and central black twin tailpipes of the sports exhaust system, which is included as standard. A new black trim strip between the tail lights characterises the rear-wheel-drive models. The light strip is reserved for the all-wheel-drive models. Sport Design exterior mirrors, 20-inch wheels with central locking device painted in silk-gloss black, plus GTS logos on the doors complete the side view. The characteristic Targa bar, which is supplied in black for the first time on the GTS, also lends the 911 Targa a particularly distinctive look.

New Porsche Track Precision app and high-quality equipment
GTS genes also shape the interior. The stopwatch of the Sport Chrono Package is integrated as a central component of the dashboard. The Porsche Track Precision app has been further enhanced specially to coincide with the market launch of the GTS models. Its features include automatic recording, detailed display and analysis of driving data on a smartphone. GTS passengers sit on Alcantara seats with a new stitching pattern. The Sports seats Plus with GTS logos on the headrests can be adjusted in 4-ways electrically and provide increased lateral support and comfort. Other features include brushed, black anodised aluminium trim strips on the instrument cluster as well as a high proportion of Alcantara, which can be found on the steering wheel rim, centre console and armrests, for example.