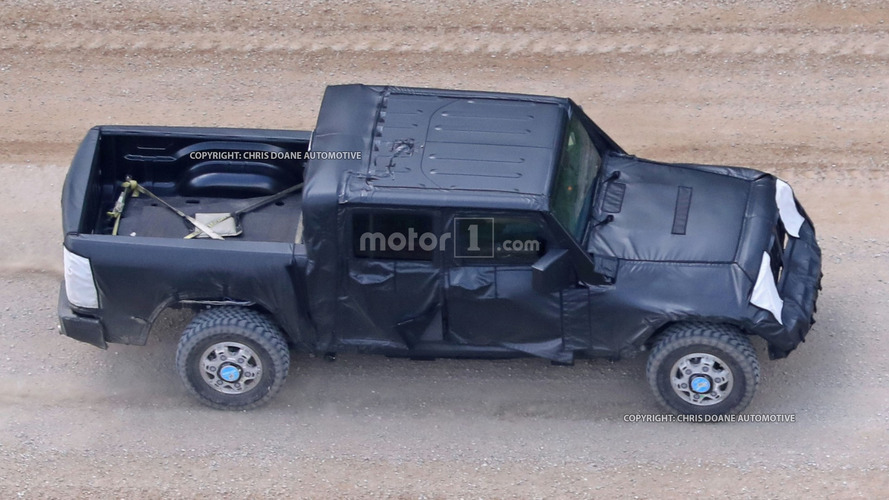 Wrangler pickup to be built in Ohio, Wagoneer models in Michigan.

Fiat Chrysler Automobiles confirmed today production plans for three models that we had long expected were on the way. Jeep confirmed it will start building a Wrangler pickup model in Ohio, as well as Wagoneer and Grand Wagoneer models in Michigan, by 2020.

The announcement came as FCA said it would invest $1 billion in its Warren Truck Assembly and Toledo Assembly Complex plants, adding 2,000 jobs, to produce the vehicles. But the move also will allow FCA to bring production of Ram Heavy Duty trucks from Mexico back to the U.S., at the Warren plant. It’s a move that comes on the heels of other automakers (including Toyota, General Motors, and Ford) receiving heavy criticism from President-elect Donald Trump about building cars in Mexico. The Ram 2500 and 3500 HD trucks are currently built at the Saltillo Truck Assembly Plant in Coahuila, Mexico.

As for the Jeep announcements, we essentially knew this was coming. Our spy photos, pictured, already suggested the next-gen Jeep Wrangler would spawn a pickup-truck variant, and now this news makes it official. FCA CEO Sergio Marchionne said it and the Wagoneer models are key to bringing more customers to the Jeep brand.

“The expansion of our Jeep lineup has been and continues to be the key pillar of our strategy,” he said in a statement issued today. “In addition, these all-new products will reach new consumers, as well as those that have been part of the Jeep tradition.”

The Jeep Grand Wagoneer is expected to be a very luxurious range-topping model that could compete with the likes of Range Rover, and might cost well into the six-figure range. But we’ve heard before that development has been delayed, so it’s unclear when – between now and 2020 – the model will debut. The Jeep Wagoneer, meanwhile, will likely be a slightly smaller and more affordable version. We reported back in July that the two models, which should have seating for up to seven people, would be distinguished by their level of luxury; the Grand Wagoneer is expected to be considerably more upscale.

Jeep boss Mike Manley previously told Automotive News: “The Wagoneer name represents, historically, the pinnacle of premium for the Jeep world … you could imagine the use of Wagoneer to denote a really premium vehicle, and Grand Wagoneer takes it to the very next level.”

FCA US today confirmed the next phase of its industrialization plan by announcing a total $1 billion investment in plants in Michigan and Ohio, and the addition of 2,000 new American jobs. Consistent and combined with previously announced investments, FCA US is further demonstrating its commitment to strengthening its U.S. manufacturing base, and aligning U.S. capacity to extend the Jeep® product lineup. In total, FCA US has committed investments of more than $9.6 billion in its U.S. manufacturing facilities and created 25,000 new jobs to date since 2009.

Today’s announcement is the second phase of an industrialization plan announced in January 2016. The plan called for the realignment of the Company’s U.S. manufacturing operations to fully utilize available capacity to respond to a shift in market demand for trucks and SUVs, and to further expand the Jeep and Ram brands.

With the $1 billion investment, FCA US will retool and modernize the Warren Truck Assembly Plant (Michigan) to produce the all-new Jeep Wagoneer and Grand Wagoneer, and the south plant of the Toledo Assembly Complex (Ohio) to build an all-new Jeep pickup truck. These actions are planned to be completed by 2020. More than 2,000 jobs also will be added to support production of these models. The added benefit of the investment in Warren is that it will enable the plant to produce the Ram heavy duty truck, which is currently produced in Mexico.

“The conversion of our industrial footprint completes this stage of our transformation as we respond to the shift in consumer tastes to trucks and SUVs, and as we continue to reinforce the U.S. as a global manufacturing hub for those vehicles at the heart of the SUV and truck market,” said Sergio Marchionne, Chief Executive Officer of FCA N.V. “These moves, which have been under discussion with Dennis Williams and the rest of the UAW leadership for some time, expand our capacity in these key segments, enabling us to meet growing demand here in the U.S., but more importantly to increase exports of our mid-size and larger vehicles to international markets.

“The expansion of our Jeep lineup has been and continues to be the key pillar of our strategy. Our commitment to internationalize the Jeep brand is unwavering, and with these last moves, we will finally have the capacity to successfully penetrate markets other than the U.S. which have historically been denied product due to capacity constraints. In addition, these all-new products will reach new consumers, as well as those that have been part of the Jeep tradition,” said Marchionne.

The actions announced today are subject to the negotiation and final approval of incentives by state and local entities.

The first announcement confirmed a more than $1 billion investment and the addition of 1,000 jobs at its Illinois and Ohio plants. The Company will invest $350 million in the Belvidere Assembly Plant (Illinois) to produce the Jeep Cherokee, which will move from its current production location in Toledo, Ohio, in 2017. Approximately 300 new jobs would be created.

Following the move of Cherokee to Belvidere, the Company will invest $700 million in the Toledo Assembly Complex (Ohio) to retool the North plant to produce the next generation Jeep Wrangler. Approximately 700 new jobs will be added.

In the second announcement, FCA US announced that it will invest nearly $1.5 billion in its Sterling Heights Assembly Plant (Michigan) to retool it to build the next generation Ram 1500. In September, the Company committed to adding 700 new jobs to support production.