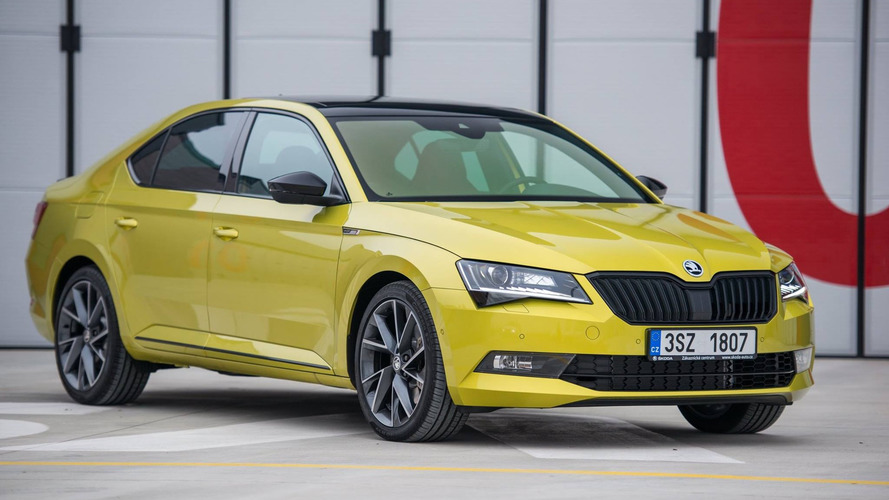 Who said Skodas are boring? This one has 280 horsepower and the looks to match.

Superb Facelift Is Out:

There’s no denying Skoda has come a long way since the early 1990s when the Volkswagen Group took over. The Czech brand sold more than one million cars in 2016 and one of the driving forces was its flagship model, the third generation of the modern Superb. Seen here is the brand’s crown jewel in the Sportline trim and with a fancy Dragon Skin paint available only with this trim level.

As you can imagine, it’s not exactly cheap. A standard Superb Sportline kicks off at €35,050 in Germany, but that’s for the version fitted with a 1.4 TSI engine. This one right here has the range-topping 2.0 TSI with 280 horsepower delivered exclusively to an all-wheel-drive setup via a six-speed, dual-clutch gearbox. Select this engine in Skoda’s German configurator and the price jumps to €44,850, before ticking any boxes on the options list.

Should you want the swanky paint, that’ll be an extra €850. It also has the panoramic roof, which will set you back an additional €1,090. Go all out and you can pay as much as €55,000 for a fully loaded Superb Sportline hatchback with the 280-hp TSI engine. The more practical Combi version costs even more.

That’s a lot of money for a Skoda, but then again it is the most exciting model in the range. The sporty looks and beefy engine are matched by the car’s performances, with the 0-62 mph (0-100 kph) taking a swift 5.8 seconds en route to an electronically governed 155 mph (250 kph). That's fast enough to beat in a drag race some high-performance cars (from the 1980s), as proven in an ad released by Skoda last year.

Should you desire more power, a Superb RS is being considered and if it will receive the stamp of approval from Skoda’s execs, it will likely have well over 300 hp.

The Superb is the only model right now in Skoda’s portfolio to receive the Sportline treatment, but we already know the Kodiaq will arrive at the Geneva Motor Show early March in similar sporty attire.