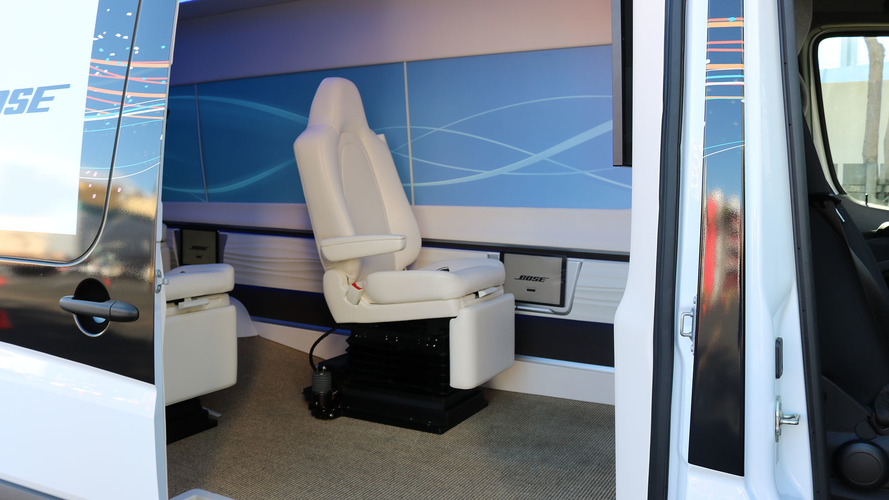 Moving seats and headrest speakers could make the difference.

The company used the Consumer Electronics Show (CES) to highlight Bose Aware Signal Steering (BASS), a technology that could help keep passengers more alert of potential danger in autonomous cars. It works by positioning alert sounds around drivers in 360 degrees of space ­ – without using an expensive, heavy, and space-consuming surround-sound system. With so many beeps and chimes in a modern car, “It can be really hard to distinguish what’s going on,” says John Pelliccio, Bose’s product line manager for automotive audio.

The BASS technology, a concept version of which I tried in a Nissan Leaf, uses two 63-millimeter (2.5-inch) “UltraNearfield” speakers in the seat headrest. Bose’s sound processing system adjusts the relative timing and volume of alerts in each speaker to fool your ears and mind into perceiving the sound’s origin differently: “I can now trick your ears into thinking sounds are coming from lots of different places,” explains Pelliccio.

In a demonstration sample, navigation prompts to turn left “sound” like they’re far ahead of the driver and to the left, progressively moving closer as the turn approaches. And when pedestrians stepped out in front of the car, the alert message “sounded” as though it was coming from the front-right of the car, prompting me to look in that direction.

These types of alerts could be critical in semi-autonomous cars that need to grab a driver’s attention to take over in an emergency situation, Pelliccio says. If drivers take their hands off the steering wheel, haptic warnings (such as a vibrating steering wheel) won’t work; if they’re reading a tablet computer or texting, visual warnings on a dashboard won’t work either. The spatially-presented alert chimes, however, could be a great solution.

“We hypothesize that this is going to make driving safer,” Pelliccio says.

This isn’t just a dream, either, and could reach production cars soon. While fitting the aforementioned headrest speakers can be a challenge – it requires new seats with cables and the speakers add weight up high – Bose already sells sound systems with headrest speakers in the Mazda MX-5 Miata, Cadillac CT6, and European Nissan Micra. Nissan announced at CES that it will use the Bose technology in its future vehicles, saying that the feature, “helps enhance overall safety on the road.”

Another way that Bose wants to make self-driving cars more pleasant is with seats that help counteract motion from bumps in the road. An extension of the Bose Ride seat already sold in Freightliner and Volvo semi trucks, as well as other vehicles, the car seats can move more than 7 inches up and down, plus side-to-side, to keep the passenger stationary even as the vehicle moves. The goal? Make it feasible to perform tasks that need careful hand motions ­– applying makeup, drinking coffee, or even just reading a newspaper – when you’re riding in a car that drives itself.

The technology was the eventual result of Bose’s efforts to develop a fully active suspension system; as this demonstration video shows, the suspension could counteract body roll while also improving comfort on bumpy roads.

I rode in a demonstration van that a Bose employee drove around a parking lot littered with simulated potholes, driveway openings, and other annoying bumps. With the active seat concept enabled, the seat moved up, down, left, and right as the van drove over bumps, keeping me so stable I could easily write or draw on an iPad. With the system disabled, I bounced around and drew only jagged, disjointed lines. If I were to commute every day in a self-driving vehicle, I know which mode I’d prefer for getting work done, or just relaxing.

The system is primarily about improving rider comfort; the original Bose Ride from trucks can reduce driver back pain and other injuries. But it could also help counteract motion sickness and general discomfort from bouncing around in a moving car while focusing on a different task. Compared to the original truck-focused Bose Ride, this new concept version is more compact, so it can more easily fit in passenger cars with different types of seat cushions. Bose would also like to expand to the European delivery market, where drivers use smaller vans but might suffer similar back-punishing driving conditions to American over-the-road truckers.