Just like those doors, McLaren's sales numbers were up high last year.

Another year, another sales record for Woking-based McLaren Automotive after managing to deliver an impressive 3,286 cars. That’s a whopping increase of 99.6 percent from 2015 when sales stood at 1,654 units. The British niche marque managed to boost its sales numbers all over the world, especially in North America where a 1,139 vehicles were sold, representing a hike of 106 percent compared to the previous year. North America continued to be the company’s single largest market in 2016, but Europe is closing in with 996 cars or 153 percent more than a year before.

McLaren is enjoying a significant sales hike also in the Asia Pacific region, which grew by 90 percent. The same thing can be said about the newly combined Middle East, Africa and Central and South America region where McLaren shifted 69 percent more cars than before. As for China, a total of 228 cars were sold in the People’s Republic. 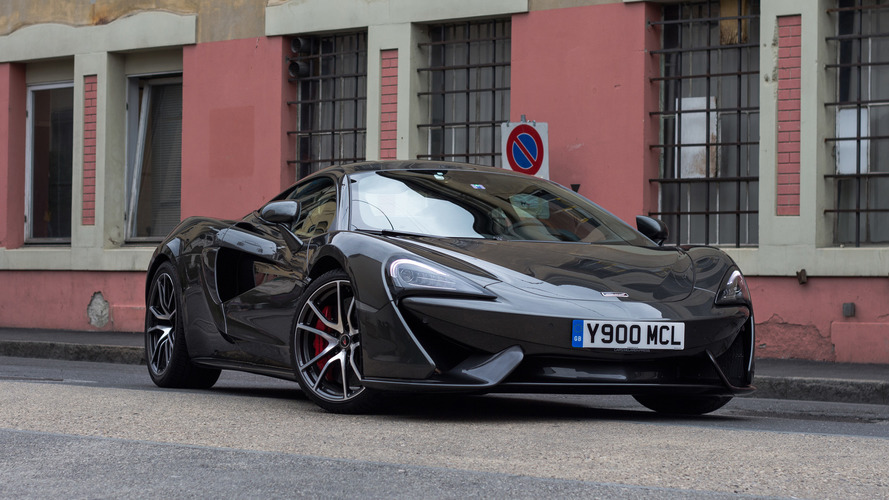 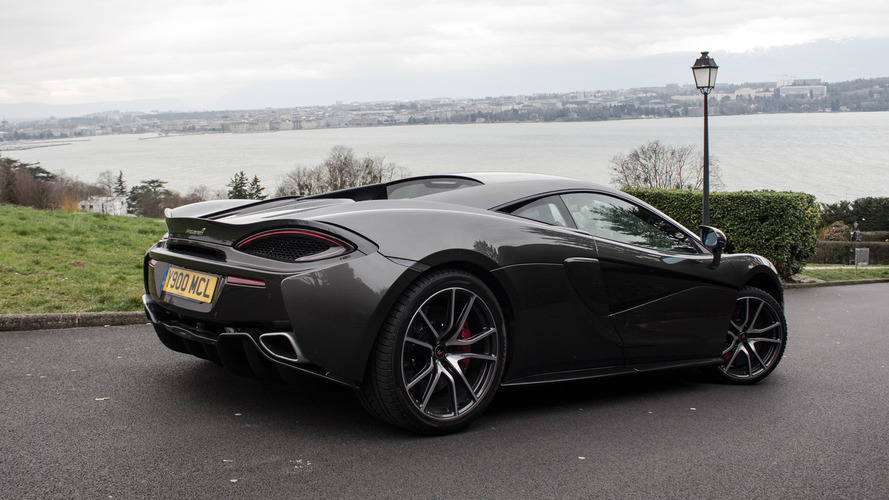 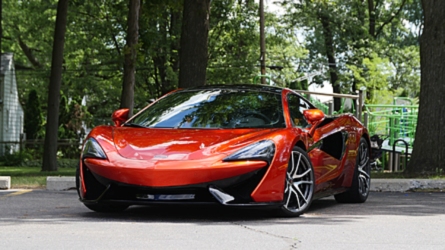 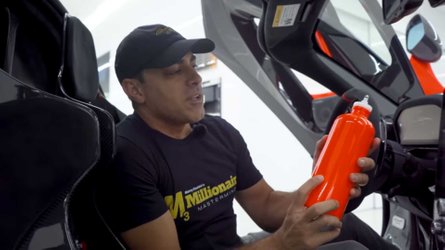 This McLaren Senna Has A Water Bottle Option That Costs $7,000

After delivering car number 10,000 last year, 2017 is shaping up to be another great year for the brand taking into account in only a couple of months it will take the wraps off the first model from the second-generation Super Series. Set to replace the 650S, the new model will be unveiled at the Geneva Motor Show on March 7 and will go on sale shortly thereafter.

Codenamed “P14,” the new McLaren is only the tip of the iceberg as far as new models are concerned, with the company’s Track22 business plan promising no less than 15 all-new cars or derivatives scheduled to be launched until 2022 as part of a £1 billion investment. At least half of them are going to employ hybrid tech by the end of the established period, while a pure electric powertrain for a concept is also on the agenda and might end up powering a model from the Ultimate Series. An F1 spiritual successor with a three-seat layout is also in the works and will come out in 2019.

McLAREN AUTOMOTIVE SALES SURGE TO NEAR-100% INCREASE IN 2016

McLaren Automotive, the British manufacturer of luxury sports and supercars, has recorded another record year of sales growth with a near-doubling of its sales volume year-over-year, selling a total of 3,286 cars in 2016 compared to 1,654 in 2015. The 99.3 per cent improvement in sales performance also follows the company’s announcement of a third consecutive year of profitability in 2015 and the production milestone of the company’s 10,000th car, all capping another highly successful and record-breaking year.

Mike Flewitt, Chief Executive Officer of McLaren Automotive, commented: ‘2016 was a remarkable year for McLaren Automotive. We’d planned it to be a year of considerable growth, thanks to the first full year of Sports Series production, but it’s surpassed even our own optimistic expectations, having seen development in all regions. We’ve also invested significantly in our future. The launch of the second shift at the McLaren Production Centre this time last year gives us the capacity for future volume increase and in March, we launched Track22, our six-year business plan, that demonstrates the longer-term future for the company, with 15 all new cars or derivatives planned between now and 2022. I look forward to showing the world the first of those 15 new cars in Geneva: the second-generation McLaren Super Series.’

SALES INCREASE IN ALL REGIONS

The dramatic sales development, from 1,654 cars in 2015 to 3,286 cars in 2016, was thanks to growth across all regions and exceeded the company’s own expectations on the 2016 sales performance, previously estimated as 3,000 cars.

In its first full year of production, the Sports Series family accounted for 2,031 deliveries, the majority of which came from the recently-introduced McLaren 570GT and 570S models. The Super Series also continued its success story thanks, in large part, to the McLaren 675LT Coupé and Spider models. Having both sold out in a matter of weeks, the limited production, even more driver-focused and higher-performance derivatives of the Super Series started production in mid-2015 but continued through 2016. In total, 1,255 Super Series cars were sold in 2016.

Geographically, North America continued to be McLaren Automotive’s single largest market with deliveries of 1,139 cars, a 106% increase over 2015. Europe ended 2016 selling 996 cars in total, an increase of 153% whilst the rapidly-developing market in China sold 228 cars in total. The Asia Pacific region grew by 90% while the newly combined Middle East, Africa and Central and South America region grew by a notable 69%. In addition, the global footprint of the McLaren retailer network continued apace with new dealer facilities opened in Bristol (UK), Boston and Palm Beach (USA), Gold Coast (Australia) and Fukuoka in Japan.

In March at the Geneva Motorshow, McLaren Automotive revealed details of its Track22 Business Plan, taking the company through to 2022. With a continued focus on building the world’s finest sports and super cars, the business plan reiterates a commitment to its industry-leading 20-25 percent of turnover invested in Research and Development for future products and technology.  Over the six-year Business Plan period, this represents an investment of £1 Billion and will lead to the launch of 15 all-new cars or derivatives. Of these cars, at least 50 per cent will feature hybrid technology by the end of the Business Plan period. The Business Plan also includes the development of a fully-electric powertrain for a concept car to evaluate its possible use in a future Ultimate Series. In 2016, the early prototype stages of the development work commenced.

PRODUCT DEVELOPMENTS IN ALL MODEL SERIES

In common with every year of the company’s short existence, 2016 was a year that saw a raft of new models introduced, especially in the Sports Series family. The Geneva Motorshow marked the introduction of the new McLaren 570GT - the most refined and luxurious McLaren to date. The multi-award winning 570GT took the DNA of the Sports Series but focused the new model on driver and passenger comfort over longer distances. Suspension that has been tuned for greater ride comfort combines with an increase in steering ratio and reduction in exhaust volume to deliver McLaren’s interpretation on the classic Grand Touring formula.

2016 also saw the introduction of racing and track day derivatives of the Sports Series. The 570S GT4 broke cover at the start of the season ahead of full year racing in the British GT championship, designed as the final stage in the development programme. The teenage driver pairing of Ciaran Haggerty and Sandy Mitchell successfully campaigned the development model with customer racing team Black Bull Ecurie Ecosse, securing two pole positions and a pair of race wins on the way to a third-place finish in the championship. Customer cars started to be delivered in late 2016 and will be raced competitively in the growing number of GT4 championships globally from the start of 2017. The 570S Sprint made its global dynamic debut on the Hill at the Goodwood Festival of Speed over the summer. Developed alongside the sister GT4 model, the 570S Sprint is the third model from McLaren to wear the track day special ‘Sprint’ badge. It offers drivers the ultimate in track day driving experiences, without any of the restrictions imposed by racing regulations.

Super Series developments were dominated by the preparations for the second generation of Super Series, internally codenamed P14, that was announced on 4 January 2017 and will be revealed at the Geneva Motorshow on 7 March 2017. And in the Ultimate Series, McLaren Special Operations confirmed details of the world’s first ‘Hyper-GT’, set to be the most exquisitely crafted and luxurious road-going McLaren to date.  The car, codenamed BP23, will be limited to 106 units, all of which have already been pre-sold and the first customer delivery is expected in early 2019. The car uses a three seat layout with a central driving position similar to that of the iconic McLaren F1, of which 106 units were also built, and will feature a hybrid powertrain making it one of the most powerful McLaren’s to date while focusing on longer journeys.

2016 represented a transition year for the McLaren Production Centre in Woking – the only location where McLaren’s sports and super cars are manufactured. January marked the announcement of a second shift within the facility, created due to the global demand for the new Sports Series models. A total of 250 new jobs were created during the first half of 2016 for the second shift within the manufacturing, quality and logistics departments. This strategic development took capacity at the Production Centre from 10 cars per day to 20 cars per day, and a natural annual capacity of around 5,000 cars. Today, around 90% of all cars built within the McLaren Production Centre are exported.

In July 2016, the Production Centre celebrated the fifth anniversary of McLaren Automotive building cars. Following a 14-month construction, on 5 July 2011, the first car, a McLaren 12C, rolled out of the newly-built McLaren Production Centre and the modern-day McLaren story started. And 2016 concluded with the production of McLaren’s 10,000th car. The 570S finished in Ceramic Grey from the McLaren Special Operations ‘Defined’ palette left the Production Centre on 15 December, just over five years after the start of production. Highlighting the pace of the company’s development, it took 42 months to build the first 5,000 cars and just 22 months to build the next 5,000.