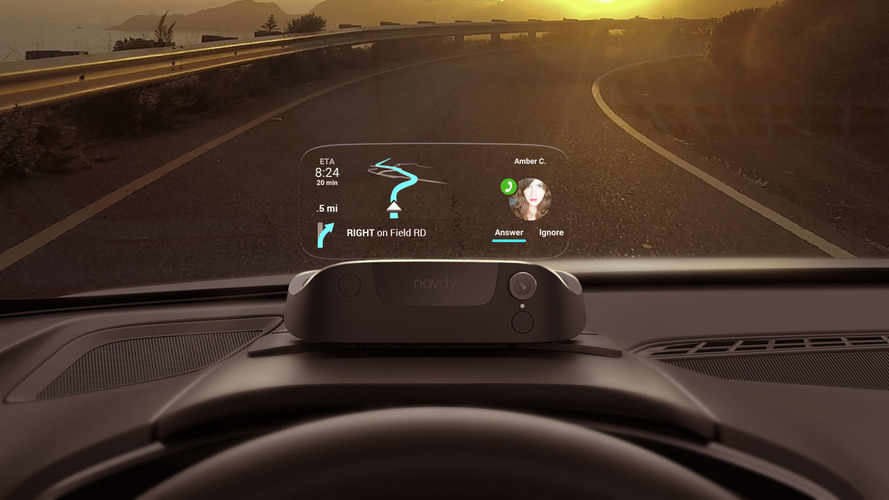 The $799 device brings modern features to any car.

When Navdy CEO Doug Simpson first began developing what became the company’s portable head-up display, he was really doing it because he thought it would be a cool upgrade for his own vehicle.

“I’ve always been a tech geek, but also a car nut,” says Simpson, whose father was a mechanic.

Then it turned out other people were interested in the idea. Now Navdy is selling the device to help car owners upgrade their older cars with 21st-century technology.

Navdy is a small black box that sits atop your car dashboard, with a transparent panel onto which driving information is projected. Like head-up displays built into cars from the factory, it’s designed to make the information appear to “hover” about six feet in front of the driver. The idea is for you to never have to move your eyes from the road, says Simpson.

“We think eventually the dashboard goes away and everything is presented on your windshield,” he says.

The main Navdy projector plugs into the car’s OBD-II port for power and for information like fuel level, speed, and engine RPM. It then pairs over Bluetooth with the owner’s smartphone to provide navigation, music-player control, calling, and other notifications. There’s a little scroll wheel that straps to the steering wheel for major controls, but Navdy also has gesture control. Wave your hand left to answer a call or have a text message read aloud, for instance. You can also select displays for maps and navigation, with full-color maps and directions, as well as selecting through your music library.

Navdy worked hard to miniaturize all the lights, lenses, and other parts needed to produce a bright, clear head-up display to something only barely bigger than a Moleskine notebook. That’s compared to HUD systems that displace “3 to 4 liters” of space inside the dash of a normal car, Simpson says. It doesn’t use polarized light, either, meaning you can still read the Navdy display when wearing polarized sunglasses – a problem with many factory-baked HUDs.

Speaking of problems, ever tried using navigation on your phone in a tunnel or in a city with tall skyscrapers? The Navdy has built-in offline maps so it can work without a cell signal; when the GPS signal is fuzzy, it can use on-board accelerometers and data about the car’s speed to keep guiding you. “We can still track your location in tunnels and parking garages,” Simpson says.

The Navdy has been on sale since late October and though he won’t say how many units have been sold, Simpson says its users have logged a total of 4.7 million miles. Perhaps unsurprisingly, it’s proven popular with people who spend more time in the car: “The longer the commute, the more likely people are to buy Navdy.”

In a vacuum, the features on offer aren’t necessarily new. Many cars already offer head-up displays and some, like the new BMW 7 Series, even have gesture control. But the difference is that the Navdy can be installed in any car. With Americans keeping their cars longer than ever – about 11.6 years on average – being able to upgrade the car you already own with brand-new tech is a big selling point.

Simpson says the system is easy enough to set up that anyone can do it themselves. The accompanying smartphone app guides owners through selecting which of the three adhesive mounts they should use on their car’s dash, running the power/data cable to the OBD-II port, and syncing the app. But in select markets, including New York, San Francisco, and Chicago, Navdy will send a representative to walk owners though the process.

For buyers with older cars, built before 1996 and thus lacking an OBD-II port, Navdy is developing a version powered only off a car’s 12-volt plug. Imagine the incongruity of seeing, say, a 1980s Honda CR-X with a head-up display.

Navdy starts at $799 or is available in installments of $33 for 24 months. That’s certainly not cheap, but Simpson notes it’s far more affordable than buying a new car with similar features or paying for a fancy option pack with those features in a car. At the moment, Navdy is only available for purchase online at navdy.com, but soon the company plans to expand availability into Amazon and brick-and-mortar retailers.