BMW built a 5 Series that can drive itself 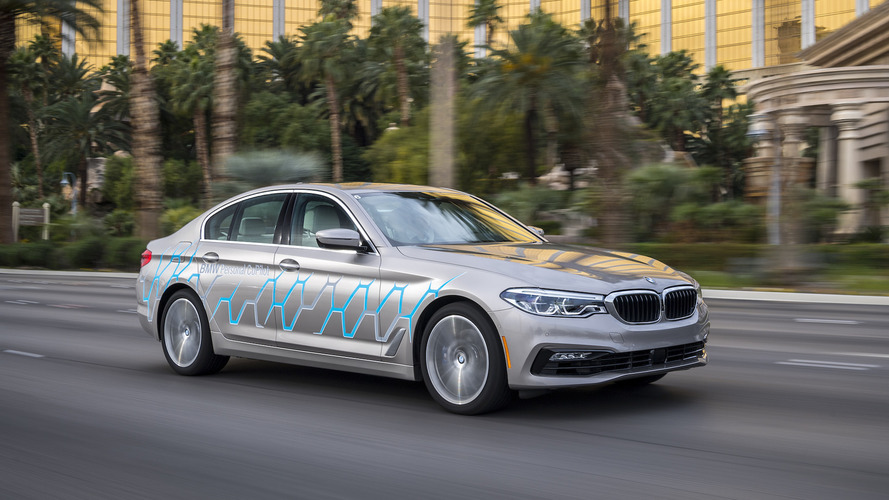 The autonomous prototype will be on display at CES.

In the ongoing pursuit of a semi-autonomous lineup – which the company hopes to have on the road by 2021 – BMW has unveiled an all-new, self-driving 5 Series at CES. Though the company is calling it a "prototype," it seems about as close to production as any car on the road.

Here’s how it works. Using the available onboard computer, the 5 Series can cross-check the vehicle’s position and surroundings via a digital map. That means insanely accurate lane-keeping capabilities. The driver also has the ability to notify the vehicle of upcoming appointments and events, to which the car will calculate an optimal route and suggest departure times based on traffic and road conditions.

All that information is controlled via an Open Mobility Cloud service, which acts as the intelligent data management system. It also allows drivers and passengers alike the opportunity to enjoy many of the added in-car entertainment network.

Once in "Passenger" mode (i.e.: autonomous mode), users have access to a suite of apps like Amazon Prime Video and Amazon Prime Now, which are seamlessly integrated to their smartphones or tablets. If a video is selected, BMW says the car will dim the lights and close the rear sunshades. If something is purchased via Amazon Prime, passengers will be able to select a pickup point along the vehicle’s route.

Though the 5 Series prototype doesn’t integrate BMW’s new hologram virtual touchscreen – which is also making its debut at CES – it does include many of the gesture controls available in cars like the 7 Series and the inclusion of Microsoft Cortana for voice controls.

The cherry on top of this technology sundae is a Robot Valet Parking service. It’s as cool as it sounds. A fully-autonomous parking procedure allows the driver to simply exit the vehicle and send it on its way, and recall it via an app when the driver is ready to be picked up.

All this advanced technology will be on display at CES 2017 in Vegas.

The future of personalised driving.

Demonstration drives in the BMW 5 Series Sedan-based prototype will shine the spotlight on a personalised, connected driving experience in a highly automated vehicle. A variety of technical modifications to support automated driving, based on the research & development projects of autonomous driving, have been incorporated into the new BMW 5 Series for the purposes of the demonstrations. On specific route segments, drivers can hand over both longitudinal control tasks and lateral control to the assistance systems, which frees them up to concentrate on other activities. The sensor and control technology that makes it possible for drivers not only to delegate acceleration and braking to the vehicle but also to take their hands off the steering wheel for long periods at a stretch is based on a further-refined prototype solution based on the driver assistance systems already fitted in today’s production vehicles. This is another reminder of the high quality and potential of the technology already deployed in current BMW models.